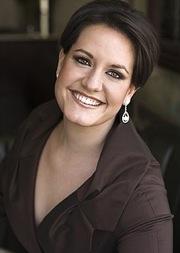 It’s always a pleasure to watch a singer make her way from aspiring talent to full-fledged artist — and to witness her finding her comfort zone in a vast sea of repertoire. This week’s San Francisco Symphony program, featuring soprano Elza van den Heever as soloist in Richard Strauss’ Four Last Songs, was a beguiling case in point.

Van den Heever, who trained in the San Francisco Opera’s Merola program, was one of those who show promise from the start: a singer with a large, powerful voice, richly colored chest tones, and thrilling top notes. But not all of the South African artist’s early assignments were good fits. When she made her professional debut in 2007, stepping in as an 11th hour replacement for another singer as Donna Anna in San Francisco Opera’s Don Giovanni, the results were competent, but puzzling, and a little awkward.

That’s all over now. Thursday’s performance at Davies Symphony Hall — which also included Strauss’ Ein Heldenleben and Schubert’s "Entr’acte" (Allegro molto moderato) from Incidental Music for Rosamunde — served as an excellent showcase for van den Heever, who, at this point in her career, sounds as if even the most challenging Strauss roles may be within her reach.

The composer’s Four Last Songs are a fascinating blend of the ethereal and the sensual. As the texts (by Hermann Hesse and Josef von Eichendorff) conjure an autumnal atmosphere of reflection and release, the details — golden leaves falling from acacia trees, birds flying in graceful arcs through the twilight mist — suggest a vibrant life force still at work.

With Music Director Michael Tilson Thomas leading a beautifully restrained orchestral performance, van den Heever delivered the vocal part with grace and sensitivity. Looking glamorous in an indigo gown, her dark hair long and flowing, the soprano shaded the performance with an apt blend of wonder and resignation. In the first song, “Fruhling” (Spring), she sounded agile, lifting the voice with apparent ease to the phrase “Duft und Vogelgesang” (scents and birdsong) over the orchestra’s sheer, shimmering sound.

Van den Heever adapted a softer tone in “September,” and sounded unfettered in the long, voluptuous lines of “Beim Schlafengehen” (Going to sleep).  Tilson Thomas drew particularly rapturous playing from the orchestra here: lithe, silvery woodwinds, firm-voiced brass, and a solo by Concertmaster Alexander Barantschik that was suffused with sweetness.

After intermission, Tilson Thomas returned to Strauss’ Ein Heldenleben — the Symphony’s first performance of Strauss’ tone poem since 2002 — with palpable affection, tremendous focus, and that particular kind of ensemble sound this conductor elicits so well: awe-inspiring in the tutti episodes, eminently characterful in its individual voices.

The swaggering music of the initial episodes, which introduce the Hero of the title, were limned by bright contributions from the woodwinds and the gravitas of the low strings. Then came another eloquent solo from Barantschik; playing with crisp, slightly acerbic tone, the violinist offered a vivid portrait of “The Hero’s Companion.” Still, Tilson Thomas and the orchestra had their finest moments in the swirling martial music of “The Hero at Battle.”

The program opened with the first S.F. Symphony performance of the "Entr’acte" from Rosamunde. Composed, like Schubert’s “Unfinished” Symphony, in the key of B minor, the score served as incidental music for Wilhelmine von Chezy’s play, which premiered in Vienna in 1823. If the play wasn’t a hit, its plot — which included shipwrecks, piracy, poisonings, and more — inspired Schubert to write music of propulsive drive and boisterous charm. Amid all the turbulence, though, there are moments of startling tenderness, and Tilson Thomas mined them for all they were worth.