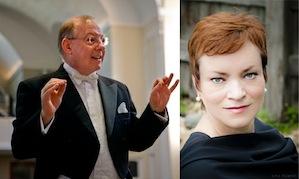 It is a sign of the times that Philharmonia Baroque began this year’s Berkeley Festival (which runs June 3–10) with a concert of music by Haydn, Mozart, Beethoven, and other post-Baroque composers. This year’s Festival programming shows that interest in historical performance practice extends to music before and after medieval/Renaissance/Baroque, and beyond the confines of Europe.

The opening concert, Sunday at the First Congregational Church of Berkeley, was a recital by soprano Dominique Labelle, accompanied by Nicholas McGegan on fortepiano, Elizabeth Blumenstock on violin, and Phoebe Carrai on cello, all playing about a fourth of a step between Baroque and modern pitch.

The Emotional Roles of Dominique Labelle

Half the program was devoted to settings of Scottish songs from the collection of publisher George Thomson in the early 1800s. He loved the songs but not their raunchy lyrics, and persuaded Robert Burns to bowdlerize the words. Burns’ poems were fitted to each tune, and many were sent to Haydn and Beethoven, both of whom were commissioned to make arrangements for piano trio. Both preserved the Scottish tunes, with their characteristic wide leaps, and neither messed with the harmony (unlike Benjamin Britten later, when he rewrote English folk tunes).

There is some question whether Haydn and Beethoven were furnished translations of Burns’ poems (Haydn’s years in London might have given him some clues). In any case, Labelle sang with close attention to the stories, joys, and laments of each verse of each song. Among my favorites: Auld Robin Gray (Haydn) — the story of a girl whose lover goes to sea, is supposedly lost in a shipwreck, and returns just after she is married to another. John Anderson, my jo, John (Haydn) — poem by Burns on lasting love. O might I but my Patrick love (Beethoven) — frustrated love; refrain with a vocal cadenza, imitated by the piano at the end. Oh! thou art the lad of my heart, Willy (Beethoven) — happy love. On the massacre of Glencoe (Beethoven, text by Sir Walter Scott).

Dominique Labelle sang at her brilliant best in her native language, French.

Dominique Labelle sang at her brilliant best in her native language, French. Romance by Pierre-Alexandre Monsigny was a special treat. Close to the one we love, tout est plaiser. Indeed, all was pleasure in her performance. She also sang a Barcarolle, Au lever du jour (At daybreak), a French gondolier song, by François-Adrien Boieldieu.

Two songs by Mozart graced the first half of the program. Labelle’s gorgeous voice was well suited to the lovely Abendempfindung (Evening), a song about attachments that transcend death. Singers of early music and new music, like Labelle, often perform from score, because they are constantly learning new repertoire. But Das Veilchen (The violet) would have benefited from memorization. The song needed more use of dynamics and timing to tell the story of a little violet longing to be picked by a beautiful maiden, only to be stepped on by said maiden, but happy that its death was caused by the beloved’s foot.

Blumenstock and Carrai played throughout with a lovely singing sound to match Labelle’s.

Several pieces for piano trio were interspersed with the songs, including a charming Allegretto from a piano trio in B-flat by Beethoven, and Haydn’s beautifully crafted piano trio, No. 32 in A Major. Blumenstock and Carrai played throughout with a lovely singing sound to match Labelle’s.

McGegan’s fortepiano sound was seldom what could be called singing, but he tore with relish into Frantisek Kotzware’s The Battle of Prague. Trumpets, cannons, a blistering many-fingered attack, cries of the wounded, a Turkish march: all were dispatched with panache. This piece, popular for more than a hundred years, celebrated a battle between King Frederick the Great of Prussia and the Austrians. McGegan’s entertaining program notes didn’t tell us who won, or why the battle ends with “God save the King.”

Philharmonia dedicated the concert “to the memory of beloved founding member Judith Nelson (1939–2012).”