How Do We Find Sasha Cooke Mid-Pandemic?

One of the Bay Area’s most loved mezzo-sopranos, Sasha Cooke, has just released an echt-COVID recording: 17 songs commissioned during the pandemic that convey artists’ feelings and experiences during these COVID-tainted years. “The only common thread is that these gifted creators were given carte blanche to create what spoke most to them during this time,” Cooke writes in the booklet accompanying How Do I Find You, her new 70-minute Pentatone recording with pianist Kirill Kuzmin.

Some of the composers, including Caroline Shaw, Missy Mazzoli, Christopher Cerrone, Gabriel Kahane, Huang Ruo, Timo Andres, and Nico Muhly, are well known to new-music afficionados. Some readers, in fact, may be tempted to chastise me for not knowing the work of some of the other women and men, all under 50, whom Cooke commissioned for the album. Among the poets and lyricists, Mark Campbell (who supplied texts for three songs), Royce Vavrek, David Henry Hwang, and Gene Scheer may be the most familiar.

Those hoping to find a modern-day Schubert or Debussy among the contributors, let alone the contemporary equivalent of Goethe, Rilke, Rückert, or Heine, had best readjust expectations. In a time of great struggle and personal sacrifice — just about every artist’s 2021 calendar was riddled with cancellations, and their days and nights filled with caution, concern, and fear — lovely melodies and lofty linguistic flights were not foremost in many of their minds. Instead of memorable tunes, we find down-to-earth songs and lyrics that seek — at times struggle — to express a time in history when the only certainty is of prolonged uncertainty.

Even though few of the composers share Jake Heggie’s gift of communication, there are some real gems in the collection. Take, for example, “Inward Things,” Nico Muhly’s setting of introspective musings by 17th-century English poet Thomas Traherne.

Another beauty is Gabriel Kahane’s “The Hazelnut Tree,” where commonplace references, set to a tune that reflects Kahane’s fondness for the Broadway idiom, ultimately cede to wonder at the beauty of nature. The Broadway influence surfaces again in “(A Bad Case of) Kids,” Andrew Marshall’s droll setting of lyrics by Todd Boss. I expect that Cooke will make the most of both songs when she performs in Davies Symphony Hall on Sunday night, Jan. 30, at 7:30 p.m.

While some of the songs exploit Cooke’s wide vocal range, the raison d’être for their challenging highs and probing lows is not always apparent from the lyrics themselves. But when music and words unite as one, the rewards are plentiful.

Cooke’s strengths are as out in the open as the subject matter. Her voice is exceptionally warm and plush, with a velvety finish that extends through the upper midrange and, at times, far higher. Although high notes occasionally betray an edge, when the composer allows her to adequately prepare for them, they can thrill. Note, for example, how beautifully Cooke voices the top notes in Jimmy López Bellido/Mark Campbell’s “Where Once we Sang” and Matt Boehler/Todd Boss’s “Risk Not One.” 98 percent of the time, she sounds wonderful.

Her mode of delivery is another thing entirely. As exemplary as her diction may be, expressive extremes are not her strong suit. In their stead, she seems to be most in her element when songs call for unadorned sincerity. There are some funny songs here — Rene Orth/Colleen Murphy’s “Dear Colleagues,” which expresses the challenges of pandemic parenting, is hilarious — but you’ll be hard pressed to hear Cooke totally break loose and, when this song calls for it, convincingly freak out.

As beguiling as the calm center of Cooke’s voice may be, there are times when I wish she would spend a few minutes jumping up and down on a trampoline before beginning to sing.

Frances Pollock/ Emily Roller’s “#MasksUsedToBeFun,” the sole song that addresses the absurdities of social media amid societal upheaval, requires Cooke to speak numerous highly charged, oft-ironic lines. As much as she tries to get into character, she’s far from convincing. Not that her task is a simple one. To give but one analogous example, in Act III of Verdi’s La traviata, few sopranos can convincingly portray Violetta’s anguish as she first recites the letter that begins, “Teneste la promessa,” and then loses herself in despair. Listen to performances by  Maria Callas and the very different Claudia Muzio for exceptions.

A perfect recital? No. But one that brings consistent beauty to subject matter as real as it gets. How Do I Find You speaks to far more than Cooke’s many fans. Highly recommended.

Tickets for Cooke’s performance with the SF Symphony are available here. 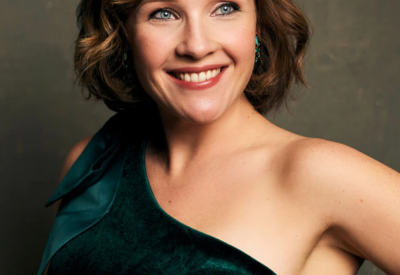 SASHA COOKE: HOW DO I FIND YOU

The mezzo soprano's recital in San Francisco with pianist Julius Drake offered rich payoffs in the middle of the program, oddities at the beginning and end.

In advance of her stint with the S.F. Opera in June, the singer muses on her wildly varied career, her special relationship with MTT, and the joy of singing.

Sasha Cooke: A Francophile Soprano Who Loves to Say “Oui”

Since her years in the Metropolitan Opera’s Lindemann Young Artists’ Program, mezzo-soprano Sasha Cooke has been on the fast track to stardom. In a field already crowded with mezzos, the graduate of Rice University and the Juilliard School has distinguished herself in a wide variety of concert, opera, and recital repertoire. Although her S.F. Opera debut is still several years away — read on for details — Cooke has made a strong impression in three previous San Francisco Symphony assignments.