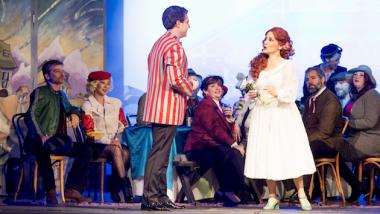 I felt a bit like a sleepwalker roaming the streets of Alameda on Friday evening before Island City Opera’s production of La Sonnambula. The downtown was like something out of a dream — half-forgotten hymns floated down from the carillon of Twin Towers United Methodist Church as I passed quaint Victorian homes and sleek art deco businesses. It’s a kind of paradise isle where time has stood still; I popped into a vintage toy shop to find all my favorite action figures from childhood behind glass, ready to be played with.

I only mention all this because a stroll through the town seems to be part of the whole Island City Opera experience. The company, now in its fifth season, is connected to the community in a way that big institutions like San Francisco Opera aren’t. Performers and audience spill into one another’s spaces, lending the event a very cabaret feel. When I arrived at the venue — the ballroom of the stately Alameda Elks Lodge — patrons at banquet tables in front of the stage were finishing dinner and continued to sip wine throughout the evening. The small, 18-piece chamber orchestra was placed less than an arm’s length from the spectators. One diner, returning late from intermission, nearly bumped into conductor Jonathan Khuner.

Meanwhile, onstage, the chorus had their own feast set up to celebrate the engagement of Amina and Elvino, the young lovers of Vincenzo Bellini’s 1831 La Sonnambula. While the music is heavenly, the plot is a tad idiotic, even by the standards of early 19th-century opera: Amina is discovered in the bedroom of Count Rodolfo, and Elvino calls off their marriage, rekindling his old romance with the innkeeper Lisa. But when the Count reveals to their tiny Swiss village that Amina had mistakenly somnambulated into his bed, Elvino forgives his fiancée and everything ends happily.

Director Olivia Stapp set the action in a stylish Swiss mountain resort during an unspecified time period. Singers were decked in a whimsical variety of costumes: traditional Tyrolean garb, mid-century styles, contemporary skiwear, and even a leather-daddy get-up for one chorister. Mercifully, Stapp didn’t take all the melodramatic details of Felice Romani’s libretto too seriously, recasting the show as an opera buffa and poking fun at all its inconsistencies and unlikely occurrences. The chorus became a charming but dimwitted assembly of cartoon characters, their eyes wide with disbelief when the Count described the foreign concept of sleepwalking. I’ve never seen an ensemble with such excellent comedic timing backed by keen musical sensitivity; their sense of balance and dynamic control in the two finales was especially admirable, with the 13 singers producing the big, full sound you’d expect from a standard-sized choir.

My one reservation about the production was the distracting dance steps for the chorus during Amina’s showstopper cabaletta “Ah! Non giunge uman pensiero,” which brings the opera to a close. All eyes should have been on soprano Eileen Meredith as she navigated the Alpine peaks of this bel canto favorite, but it was hard to focus on the soloist with a choreographed Ländler going on behind her. When she was able to perform unimpeded, Meredith displayed a confident handle on the role’s virtuosic coloratura. Her upper register has an airy, sparkling quality reminiscent of Joan Sutherland’s. And Meredith shares La Stupenda’s gracious, unaffected stage presence. She looked positively radiant in her final aria, beaming at the audience in a wedding dress with fairy lights sewn into the veil.

As her sweetheart, tenor Sergio Gonzalez was at his best in Elvino’s many plaintive passages mourning Amina’s supposed infidelity. His gentle phrasing in “Tutto è sciolto” had several audience members audibly swooning, and I appreciated the subtle way he transitioned from bitter, sob-like attacks into delicate falsetto. His chest-voice top notes had me a little nervous, especially as he got tired near the end of the evening.

Aimee Puentes was a firecracker as the fickle innkeeper Lisa. A kind of cross between Sofia Loren and Lucille Ball, the soprano combined sensuous tone with goofy faces and slapstick antics (even singing from a supine position at one point). She put her powerful instrument to comedic use, emitting shriek-like high notes during her character’s frustrated diva tantrums. Puentes had marvelous theatrical and vocal chemistry with Anders Froehlich, whose sultry baritone was well suited to his portrayal of the Count as a caddish, Don Giovanni type. Other standouts included bass-baritone Sam Rabinowitz as Lisa’s bumbling suitor Alessio, and the plush-voiced mezzo Deborah Rosengaus as Amina’s adopted mother Teresa, every inch a respectable Italian mamma in her pearls and velvet cocktail hat.

Music director Khuner led the feisty chamber orchestra at a cinematic pace—the whole performance fit snugly into the compact length of a romcom. The first-rate wind section should be commended, as well as cellist Gabriel Beistline, who shared a luscious duet with Meredith during “Ah! non credea mirarti.”

If there were a few blips and unsynced entrances here and there, they only contributed to the unpretentious, cabaret atmosphere of the production. Opera aficionados who usually stick to larger, more firmly established venues should consider giving the personable Island City Opera experience a try.

A pair of one-act operas range from the restrained to the flamboyant.

In the second production of its inaugural season, Eileen Meredith's company delivered a well-cast double bill.

The Singers Lead an Engaging Rigoletto for Island City Opera

The young company makes the most of its strong cast in a compact, economical staging.