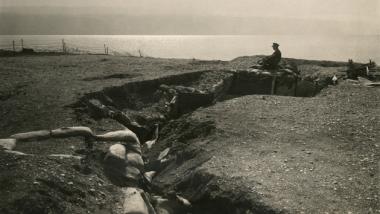 The First World War, which ended a century ago this November, maimed or destroyed many millions. From that devastation, strangely, “a terrible beauty [was] born,” as W. B. Yeats wrote in “Easter, 1916.” With new urgency, artists tried to imagine a poetry and a music that could respond truthfully to such overwhelming loss.

For some, art compensated for horror by summoning the values of a better past. Perhaps, as Rupert Brooke wrote, the graves of millions of dead soldiers could be seen as “some corner of a foreign field / That is forever England.” For others, such a dream had been long displaced by nightmare: the world had become a barren “Waste Land,” in T. S. Eliot’s words.

These contrasting aesthetics were powerfully portrayed by the Ives Collective in its concert of music associated with World War I, presented Sunday as part of the Old First Concert series in San Francisco. In four very different pieces, this committed and masterful ensemble gave complex insights into the struggle to make meaning out of the war that threatened to destroy meaning.

The afternoon began with Josef Suk’s 1914 string quartet, Meditation on the St. Wenceslas Chorale, based on a medieval tune beloved by Czech patriots. Meditation has a few elements of modernism, but for the most part employs a passionate late-Romantic aesthetic, rich in melody and emotionally rousing. One could hear how Czechs could see the war as an opportunity for liberation from their Austrian masters.

Edward Elgar’s Piano Quintet in A Minor, Op. 84 — which constituted the entire second half of the program — also looks back from the war to the past, in this case to the music of Schumann and Brahms. Though written in 1918, the quintet seems removed from the context of the trenches. It is perhaps better seen as Elgar’s own testament to the musical heritage of the Germanic nations that had sadly become England’s bitter enemy. In failing health but summoning up one of his final bursts of creative energy, Elgar, with his accustomed generosity of spirit, wants to give us hope even in the face of loss.

Like his Romantic predecessors, Elgar writes in a rich and melodic style that reflects a world of order: there is a clear three-movement structure; beautiful, full-bodied tunes (as one would expect from Elgar) are given ample motivic development; and the instruments converse with comfortable, humane gentility.

The Ives Collective recently expanded from a string quartet by incorporating other musicians including the fine pianist Keisuke Nakagoshi, currently pianist-in-residence at the San Francisco Conservatory of Music, who played with elegant balance and rich sonority. Elgar’s writing for the lower voices of the quartet allowed cellist Stephen Harrison, violist Jessica Chang, and second violinist Susan Freier a number of wonderfully expressive moments. First violinist Roy Malan led the many changes in tempo with clarity and musicality, though his higher notes did not carry in the relatively large space of Old First Church with the warmth of tone that the lower voices achieved. The group as a whole played with a tight sense of ensemble, supple in shifts of tempo and affect, while shaping spacious arcs of rise and fall.

The irony of “the war to end all wars” was featured in the first half of the program, particularly in a fine performance of the song cycle Ludlow and Teme by English poet and composer Ivor Gurney and based on poems by A. E. Housman. Gurney, a foot soldier in the trenches, knew the war firsthand, having suffered the effects of shell-shock and gassing. For the Ludlow cycle, he selected some of Housman’s bitterest poems and set them with a telling sense of contrast — between predictability and randomness, fertility and waste, countryside and battlefield, life and death.

For the Gurney cycle, the quintet was joined by tenor Brian Thorsett, whose powerful voice encompassed these ironic contrasts with command and sensitivity. Especially moving was “On the idle hill of summer,” which begins with a pastoral lyric “sleepy with the flow of streams” but morphs swiftly into a nightmare of “calling bugles” and “screaming fife[s].” Befitting the poem, Gurney’s music pushes the ensemble beyond gracefulness, and both Thorsett and the quintet rose to the challenge with chilling effect.

Thorsett also sang “Elegiac Sonnet” by Arthur Bliss, a memorial to a pianist who committed suicide in 1953. While Bliss’s short and passionate outburst (on a poem by C. Day Lewis) displays the dystopia of a world overwhelmed by loss, its connection with the First World War seemed tentative, and neither the poem text nor the music matched the quality of Gurney or Housman.

Overall, this program of seldom-heard pieces, pushed into a fascinating proximity, made for an intellectually stimulating and musically satisfying afternoon.

Edward Gardner provided a firm lead while Simon Trpčeski was rhapsodic on the keys.

An Ernő Dohnányi quartet is an unexpected pleasure.

Danish Quartet Sings With One Voice