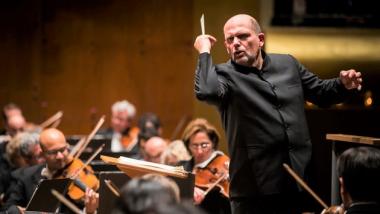 In Mozart’s score, the absence of oboe and relatively sparse writing for the lower strings create an unusually intimate sound. The little canons in the first movement, especially, feel like chamber music.

Principal clarinetist Carey Bell effectively straddled the roles of soloist and ensemble player in a deeply nuanced performance, one that sounded like the result of a lifetime of study. His playing, delicate and wispy in the highest register, created many characters. In the slow movement, his seamless phrasing suspended time. As Mozart scored it, the soloist holds the last note just a moment longer than the orchestra, as if he doesn’t want to let go. I didn’t want to, either.

On the other hand, Bruckner’s Fifth Symphony has a running time that, no matter how great the performance, doesn’t feel exactly short. The themes are all gorgeous, but it can be easy to lose the thread (especially if you don’t know the music well enough to anticipate its turns).

And so van Zweden’s brisk approach was wonderfully effective. Wisely, the performance did not indulge. Tone and articulation — and never spreading or delaying — created the expression, and the intricately interlocking figures were clear even in the thickest passages.

Earlier in the program, varied treatment of repeated material had increased the dimension of Mozart’s music without overstepping boundaries. The same care characterized the Bruckner, each element (and there are many) fully fleshed out. In the Scherzo, for example, the shaping of the pulse notes — weighty or incisive, supportive and then insistent — informed the whole music. It’s by definition a repetitive movement, but, because of the depth of its characterization, it never lost interest.

Really, this movement comes out of Beethoven; in fact, the whole symphony, though grand in scale, is essentially Classical in form. And this is where Bruckner often gets the short end of the stick in terms of reputation. Among lengthy, Romantic-era works, his music doesn’t have the singing of Mahler or the spectacle of Wagner (two composers with whom he’s often unfavorably compared, by performers and nonperformers alike). It’s almost too abstract.

Yet it’s exactly this pure classicism — the clarity and sparseness — that Saturday’s performance celebrated. Indeed, it’s not an especially large orchestra, and Bruckner rarely utilizes the full force. Instead, the opening notes are transparent, the entrances gently accumulating, like a simple canon that blossoms into a still-understated chorale. The simple interplay between the winds’ lines, in particular, recalls Mozart. Many minutes later, the final strains of fugal music contain fanfares that are comically miniature. In 80 minutes of music, there is a wealth of moments like these, ones that make Bruckner come alive.

The epic work shines in this new recording under the baton of Michael Tilson Thomas.

At SoundBox, Come for the Music, Stay for the Atmosphere