Santa Monica’s Jacaranda concert series had intended to start its own record label well before the coronavirus reared its tiny head and scuttled every concert in sight. But now that the pandemic has established a firm grip, Jacaranda Live has become a lifeline for fans of the series.

One of the first releases to surface from the Jacaranda archive of concert recordings is Rebellious, a valuable contribution to the revival of the ill-fated, now posthumously recognized early minimalist composer Julius Eastman. Here, the provocatively-titled Gay Guerilla is coupled with the nearest thing to an Eastman Greatest Hit, Stay On It. 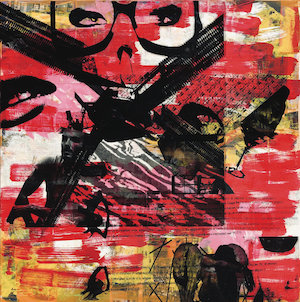 The packaging is a handsome, fold-out digipak with performer credits and a long sentence on each work by Jacaranda’s artistic/executive director and idea man, Patrick Scott. For more extensive liner notes, the listener is directed to go to this page on the Jacaranda website, where you’ll find the same wide-ranging, absorbing commentary that Jacaranda concertgoers dote upon, with Scott eventually wheeling around to his subject the way a Rachel Maddow broadcast does.

Stay On It (1973) immediately draws the listener in with its playful, repeated, syncopated riff for seven-piece band, topped by a voice that urges them to do as the title commands — to stay on it! The piece doesn’t specify which, or how many, instruments to use (just a minimum of seven), nor apparently the individual styles of each player, so every performance is different. The composer-supervised recording has a single distant female voice and revels in chaotic dissonance; another recording contains wildly jazzy solos from an avant-garde saxophonist and sliding, smeared dissonances; a live performance by wild Up that I heard at Walt Disney Concert Hall in 2014 had four singers. In the Jacaranda performance, singer Zanaida Robles holds out her words in contrast to the clipped diction on the other performances, a cooler strain of jazz comes from alto saxophonist David Brennan, and there is a more relaxed ambience reverberating in Jacaranda’s home base, Santa Monica’s First Presbyterian Church.

Gay Guerilla (1979) strikes me as a rather Romantic piece at its core, whatever its minimalist means. In a gentler, less-pulse-driven performance than others, the four pianists (Billy Childs, Scott Dunn, Louise Thomas, and Daniel Schlosberg) gradually gather dissonances before settling upon a minor chord. Eventually a chorale composed by the Protestant Reformation leader Martin Luther, “A Mighty Fortress Is Our God,” comes to dominate the loaded texture, banged out Rachmaninoff-style, then slowed down and fragmented. Scott speculates that its inclusion may have been meant as a transformation of Luther’s chorale into an ennobling cry for gay rights as per the cheeky title, but I hear it as a purely musical triumph of major-key tonality over what has preceded it. Either way, it’s an ennobling piece of music — and as a thoughtful epilogue to the album, organist Mark Alan Hilt plays a simple, harmonized arrangement of the Luther chorale.

Also available on what promises to be an adventurous new indie label: A Charged Embrace, a quartet of chamber pieces by Los Angeles-based composers William Kraft, Bruce Broughton, and Veronika Krausas.

The new-music organization finds a novel way to connect with its audience.