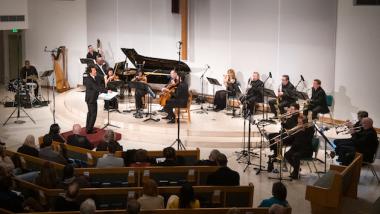 Black History Month (February) is the time when well-meaning musical organizations run to the archives, fish out some music by black composers, and then put it back where it came from. That is, if they bother to present it at all.

But Jacaranda — bless their contrarian selves — waited until well after the designated month in order to do their own program of music by African-American composers at the First Presbyterian Church Saturday night (Mar. 23). That’s a big step toward the goal of getting some of these pieces into the regular repertoire as a matter of course rather than packing the music in a box with the inscription, Do Not Open Until Black History Month.

In doing so, Jacaranda Artistic and Executive Director Patrick Scott cooked up a progression through the 20th century, giving the impression of black composers making their ways from Romantic echoes of European origin toward a music that increasingly absorbed indigenous influences from black America. The full story of black music isn’t as straight-forward as that, but it was a canny way of organizing such diverse material.

They started with Florence Price (1887–1953), the first black female composer to make any headway in the classical music field, and only now receiving a revival of interest (her Symphonies Nos. 1 and 4 were recently recorded and released on Naxos). Yet pianist and CSU Long Beach faculty member Althea Waites has been on this case for years; having received the manuscript of Price’s Piano Sonata back in 1985 while at a festival in Geneva, she has been championing the piece ever since.

The sonata is worth advocating, too, even as it pays close attention to European models. The opening theme of the first movement sounds a bit like Dvořák, the second subject may echo Rachmaninoff, but the homages come off as genuine and heartfelt, and the second movement openly evokes the flavor of spirituals. Everything was played with obvious affection by Waites.

From there, the influence of pentatonic African-American and Native American music was more obvious in William Grant Still’s Ennanga (named for a Ugandan harp), which employs a classical harp, piano, and string quartet. The harp receives a lot of solo space and lushly colors the general ensemble, which consisted of the skilled harpist Alison Bjorkedal, Waites, and the Lyris Quartet.

Once an obscure bit of Ellingtonia from The Queen Suite, Duke Ellington’s thoughtful, delicate “The Single Petal of a Rose” has received two eloquent local performances lately — first from Aaron Diehl as an encore during one of the LA Phil’s Harlem Renaissance concerts in February and now from Waites, with bassist Steve Dress shoring up the bottom end. George Walker’s Mahlerian Lyric from his String Quartet No. 1 was ardently played by the Lyris as a memorial for the composer, who died last year at age 96.

Ellington’s “In A Sentimental Mood” in a typically florid Art Tatum arrangement was supposed to have been played by pianist Cecil Lytle alone, but a last-minute decision was made to include Dress and drummer Sidney Hopson. Not a great idea on short notice, for the drums and bass had little connection with what the pianist was doing.

Lastly came a new arrangement by conductor Scott Dunn for piano and 14-piece chamber group of Ellington’s New World A-Comin’ (which already exists in several arrangements ranging from Duke’s own piano solos to a symphony orchestra). Dunn’s chart placed the back-and-forth exchange of passages for the ensemble and the virtuoso flights for solo piano in starker contrast than the symphonic versions, retaining the plunger-mute swoops of the trombones as a souvenir of the unique sound of Ellington’s big band.

It was fun, and at times, it swung. But most of all, New World A-Comin’ neatly completed the program’s journey, closing with an American idiom of swinging jazz and signature Ellington harmonies that fits inside a conventional concert hall while owing less than ever to European models.

CORRECTION: As orginially published, a photo above misidentified the conductor as Patrick Scott. The conductor in the photo is Scott Dunn.