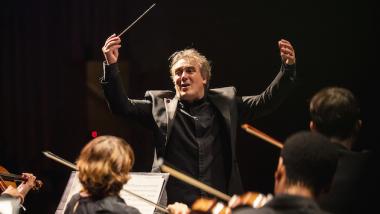 The Los Angeles Chamber Orchestra has had six music directors in its half-century of existence — and three of them have come from a single body in England, the Academy of St. Martin-in-the-Fields. The first was the LACO’s founding conductor, Neville Marriner, and the others were two of his principal players at the ASMF — violinist-turned-conductor Iona Brown and a flutist-turned-conductor with the fortuitous name of Jaime Martín.

This past weekend, Martín made his debut as the LACO’s music director — and he was not unaware of the often-circular motion of life that brought him to UCLA’s Royce Hall Sunday night (Sept. 29). Martín likes to talk — and talk — to his audience in charming, Spanish-accented English, so after intermission, he rambled on at length about the recent passing of Marriner, eventually producing a short, slim baton that the maestro’s widow bequeathed to him. He then proceeded to conduct the rest of the concert with Marriner’s stick — a literal passing of the baton across the generations.

But before he got to that point, Martín used his bare hands to lead the world premiere of a piece purposely called Begin for the occasion by the LACO’s former composer-in-residence, Andrew Norman. In a preconcert talk, Norman first compared the intent and buildup of energy in his new eight-minute-long piece to Beethoven’s Symphony No. 7, also on the program, and then to Ravel’s Bolero.

I would side with the latter comparison, for Begin strikes me as an orchestral stunt in the spirit of Bolero. The piece starts minimally by concentrating on two notes and gradually the texture gets thicker, louder, more unruly, and dislocated in rhythm before the straying parts finally start to come together almost comically near the end. The metaphor seems to be democracy at work — clashing individual voices eventually reaching consensus — with most of the musicians playing standing up as a symbol of equality. It made for a rousing kickoff, technical difficulties and all.

With the musicians back in their chairs, mezzo-soprano Anne Sofie von Otter brought a cool, understated, lived-in pathos to much of Berlioz’s atypically intimate song cycle Les nuits d’été (Summer nights). The cycle deals with various stages of love, starting in the bloom of spring, growing darker until it reaches a cemetery, then on the rebound tempered with world-wise acknowledgment that love may not be forever. Martín gave it a remarkably responsive accompaniment, even more so when von Otter offered two pop songs, Léo Ferré’s “Elle tourne la terre” (She turns the earth) and Michel Legrand’s “Once Upon A Summertime,” as seductive, lushly orchestrated encores.

The Beethoven Seventh found all of the players except for the cellists on their collective feet again as Martín offered some idiosyncratic ideas on how he wanted the piece to go. He treated the symphony as a two-movement piece, playing the first and second movements without pause, and the third and fourth movements likewise. He smoothed out the divisions in tempo between the first three movements as well, finally revving up the machine in the Finale as the violins physically leaned into the accents. As in previous appearances, Martín doesn’t seem to be as concerned with total ensemble unity as he is with expressive turns within phrases, everything signaled in easy-to-follow gestures with hand or baton. Ultimately, the finale jumped as intended, bringing matters to a ripping, rowdy head.

Finally, on a personal note, there was a third Martin on several people’s minds that night — Martin Bernheimer, the longtime Los Angeles-based music critic who died earlier that day at age 83 in New York City. Martin used to teach music criticism in Schoenberg Hall a short walk away from Royce (I was one of his students, and later a colleague and friend), and his formidable insights and irrepressible sense of humor will be greatly missed.

The top-tier flutist talks about taking up the baton and the mutual trust he enjoys with the musicians at his new gig.