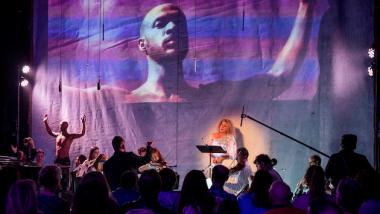 At Los Angeles Chamber Orchestra’s “SESSION pintscher” on Thursday at Mack Sennett Studios, curator and composer Matthias Pintscher asked the audience members to immerse themselves in a “sonic garden.” This proved easy to do amid the well-designed sets and visuals of the space, provided by theater-design company Four Larks.

The evening featured modern music set in different sections of a massive Silver Lake production space, through which the audience moved between pieces. Three guides led the way through the space while also serving as dancers and actors.

The evening began with Gérard Grisey’s Stèle (Stone) for two percussionists, situated at opposite ends of a large room. The audience sat between the players, enveloped in the sound of two bass drums competing with each other. Seemingly unrelated percussion lines sounded strong and clear and served as a strong introduction for the rest of the program.

Alban Berg’s Four Pieces for Clarinet and Piano added a reflective and quiet moment to the evening. “This music contains everything that can be said in music,” Pintscher told the audience before the piece. His commentary between works was useful throughout the  evening. Joshua Ranz, principal clarinet for LACO, provided a warm and understated reading that lent itself to the acoustics of the room. Pianist Gloria Cheng did well not to overpower the clarinet, and the duo produced a clarity that allowed the audience to catch the small details in Berg’s atonal work.

Pintscher himself had two original works on the program. The first, Study II for Treatise on the Veil, inspired by painter Cy Twombly’s work of the same name, featured a string trio and proved to be an exploration of bowing techniques. The musicians often used mutes, produced whistles and sliding noises as the musicians played beneath a projected series of vibrating notes. The use of extended bowing techniques allowed the musicians the opportunity to play close to the bridge or over their fingerboards, producing airy and gossamer tones.

The audience then made its way to a corner of the space bathed in bright, white light for Pintscher’s Uriel. Cheng, the pianist, and cellist Andrew Shulman gave a strong performance of the work, which also featured extended techniques including bowing the cello beneath the bridge of the instrument. The work received the evening’s strongest applause. Shulman navigated the intricate cello lines of Pintscher’s work, providing a highlight of the evening.

The concert’s climax was Maurice Ravel’s Trois poèmes de Stéphane Mallarmé, featuring the largest ensemble, including mezzo-soprano Michelle DeYoung and conducting by Pintscher. A live video feed projected the three guides on a screen above the musicians and showed text written on their bodies that seemed to reflect what DeYoung was singing. Pintscher’s clear conducting made for a balanced rendition, and DeYoung sang with notable breath control. She produced a tone of uniform strength that never faltered on Ravel’s longer melodies.

The evening ended with Iannis Xenakis’s Rebonds a, a work for solo percussionist. The piece proved a weak end to an evening of strong music. It felt anticlimactic to return from the large ensemble of Ravel to a solo percussionist in the middle of a room, despite its symmetry with the concert opener. At the close of the piece, the audience seemed not to realize the concert had ended.

Although the music was inconsistent, the concert was successful largely because of the wonderful LACO musicians and the design of the environment.