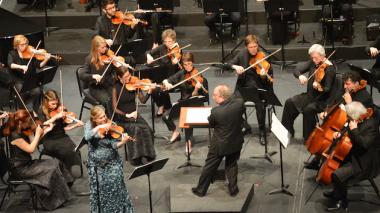 “Kahane returns” proclaimed the Facebook pop-up ad in bold red letters. And Sunday’s concert by the Los Angeles Chamber Orchestra at UCLA’s Royce Hall did have the feeling of a grand reunion.

Having stepped down last year as the orchestra’s long-time music director, Jeffrey Kahane’s inaugural return as Conductor Laureate turned into something like a musical love-in. He did not return as a guest celebrity. He returned as an old friend, and the warmth of that friendship permeated the concert.

It was also a wonderfully programmed showcase of the orchestra’s skill-set — from the bright, classical luster Kahane and the musicians brought to Haydn’s Symphony No. 99 in E-flat Major, to the atmospheric ebullience of Respighi’s Three Botticelli Pictures to the evening’s featured work, the West Coast premiere of Pierre Jalbert’s virtuosic Violin Concerto, with Concertmaster Margaret Batjer as featured soloist.

The first of Respighi’s Three Botticelli Pictures, “La Primavera” (Spring) begins like a mythical dawn in Arcadia, all a-flutter with birdcalls and luminous effects in the strings that sound like sunbeams. It was the perfect lead-in to Jalbert’s concerto.

This is the third commission that Jalbert has received from LACO and he was the first composer to take part in the orchestra’s Sound Investments program. On its way to Sunday’s premiere, the Violin Concerto was performed by the concertmasters of the co-commissioning orchestras, the Milwaukee Symphony and the Saint Paul Chamber Orchestra.

Composed in two, extensive movements, designated “Soulful, mysterious: Scherzando” and “With great energy,” the 26-minute concerto begins with a sonic landscape that closely mirrors “La Primavera.” There are gossamer effects in the strings and fluttering trills in the winds. Out of this dawn-like scene, the violin gradually emerges and takes on its primary role.

Jalbert is not a rock-the-boat revolutionary composer. His music is readily accessible, filled with intricately voiced instrumental coloration, and highly crafted. This Violin Concerto fits comfortably into the instrument’s historic repertoire with the soloist alternating between a cohesive blending with the orchestral textures, exchanging statements in varying levels of dialog, and standing out in virtuosic, bold relief.

The orchestration is lush, at times evoking the atmospherics of Ravel, at other times the exuberant energy and rhythmic propulsion of Erich Wolfgang Korngold’s concerto, with the violin soaring above the orchestra in a series of rapid figures and double stops ending with a boldly stated fireworks cadenza.

It’s in the second movement that Jalbert makes his most inventive compositional/ instrumental decisions, asking the violin soloist to “bend” notes into microtonal slurs, which are skillfully contrasted with the high-pitched ringing of bells and the resonating tones of a marimba.

Batjer played the work with an engrossing combination of emotional intensity and technical fluency on a resoundingly bright Stradivarius. Performing with the orchestra she knows so well, there was a consistent sense of comfort and support from the players and Kahane, the type of support that can only be nurtured over years of collaboration.

The frosting on the cake was the Haydn symphony. It was a Rolls Royce of a performance — smooth as silk, lustrous in its sheen, but with plenty of power under the hood.

It was a consummate study in communication between a conductor and his orchestra. Working without a baton, Kahane used his entire body language to draw out a superbly delineated and graceful performance. There were times when he indicated his intentions with nothing more than a raised eyebrow or a nod of his head.

One can only look forward to the next red-letter day when “Kahane returns” again.

A lack of information leaves the audience in the dark.