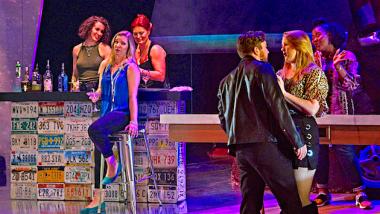 The phrase “If I were you ...” might imply advice from Miss Manners about how to handle a touchy social situation. But it also signals a darker impulse: to be someone other than who we are, to shape-shift. It’s a meme that has driven Romantic fiction from Faust and Wuthering Heights to the Harry Potter novels and zombie films.

In Jake Heggie and Gene Scheer’s new opera, If I Were You, premiered at the Merola Opera program this weekend, this gothic longing to take over another’s identity drives its central figure into a literal devil’s bargain. To escape a pathetic job and a frustrated life as a would-be writer, Fabian sells his soul and gains the power to escape into another’s body — and another’s, and another’s, finally leaving a trail of zombies behind him as he circles through an existential hell of nonidentity, until he collapses into a welcome death singing, ironically, “Hallelujah.” A dark story, indeed.

In the tradition of Berlioz and Gounod, Fabian is seduced into this hard bargain by a flamboyant Mephistopheles. This opera’s devil is a young woman who herself inhabits a dazzling array of identities, from E.M.T. to hair-dresser, continually popping up to enforce the deal. Even her name, in the best devil way, keeps shifting, from Brittomara to just Mara, and even Brittni. But she finds only a hollow victory: Fabian’s soul finally escapes its hell, saved — in an echo of Goethe — by the love of a faithful woman, here a kind of moon-goddess/girlfriend named Diana.

If I Were You was commissioned by the Merola Opera Program, San Francisco’s distinguished training school for young professional singers. As a vehicle for this 11-week vocal boot camp, Heggie and Scheer’s opera exactly fits the bill, providing multiple roles and rewarding vocal challenges. Four of the central roles were double-cast: I saw the Saturday afternoon production.

As Fabian’s soul moves from character to character, quite literally inhabiting each in turn, the opera demands extreme flexibility from each singer. Many of the roles challenged singers to voice both their original role and that of the peripatetic Fabian. “Why is my voice so low?” sang “Fabian” (a tenor, sung elegantly by Nicholas Huff) as he suddenly found himself in the body of his repulsive boss, Putnam (bass-baritone Rafael Porto). His question might well have served as a warning to the young Merolini about the Faustian world of opera — playing one day a hero and a star, the next a villain or a bit part.

As one might expect from composer Heggie (well known for Dead Man Walking, Moby-Dick, and It’s a Wonderful Life), the music is richly expressive and vocally demanding. Apart from some balance problems with the orchestra at the beginning, the singers projected beautifully in Herbst Theater, especially when singing from the front of the severely-raked stage.

As the devil, mezzo-soprano Brennan Blankenship — in a series of spectacular costumes — was satanically seductive in gesture and voice; and soprano Ann-Marie MacIntosh sang both lyrically and passionately as Diana, providing a welcome through-line as the one character who does not change shape.

The opera had three or four other meaty roles, including the lyrical soprano Elisa Sunshine as Diana’s friend Selena, baritone Timothy Murray as attractive bad-boy Paul, and tenor Brandon Scott Russell as David, a charming photographer who was (I believe) Fabian’s final soul-host.

But the very premise of a devil-facilitated transmigration of souls made for a hectic and confusing production. Each of Fabian’s many transitions to another identity seemed to shift not only his soul but also the focus of the drama itself, as the opera repeatedly abandoned a barely-known character to plunge into the anxieties of the next one.

The overall murkiness of the plot was reinforced by a quasi-mystical subtext of alchemical symbols and a recurring image (which I admit I never quite saw or understood) of elephants circling around a corpse. An abundance of projected symbols tended to overwhelm rather than clarify. A palindromic Sanskrit incantation, the instrument of Fabian’s migrations, seemed strangely forgettable in meaning and in music. If the characters can’t remember a leitmotif (and one admitted to that), how can the audience be expected to?

Part of the problem, I suspect, is the source text, Si j’étais vous, a 1947 novel in French by an expat American writer, Julien Green. From what I can gather, the book is too long, too episodic, and too “symbolist” to serve as the basis of a tight, two-hour drama, despite the best efforts of librettist Scheer.

Heggie’s music, passionate and earnest, felt burdened by the need to guide and cajole the audience through Fabian’s baffling shifts, and to convince us of the relevance of the book’s outdated spiritual mechanics. I missed the lyrical insights that Heggie brings to shorter texts in his wonderful art songs. Lighter comic moments — an argument about drinks in a bar, or “Brittni’s” unexpected rant about the life of a hairdresser — are welcome but infrequent. To be fair, tone and continuity are problems endemic to the Faust story as early as Christopher Marlowe’s 1594 Dr. Faustus. From bargain to final collection, the ur-Faust story seems to demand its own jerky progress, to proceed in a series of episodes — comic, satiric, bitter — each one pinpointing yet one more shiny devil-gift that swiftly proves empty.

Yet for all that, the Merola program is at core dedicated to training its brilliant young singers. So, bravo to the program, its coaches, directors, and organizers, for commissioning an opera that gave them such wonderful roles and tunes, and sends them out into the opera world with such a challenging and rich accomplishment.

A new opera by Jake Heggie is the jewel of the 2019 Merola season.

The West Coast premiere of Jake Heggie’s It’s a Wonderful Life is only days away.