Jamie Barton and Jake Heggie Blaze Forth in Unexpected Shadows

Parsing which is more sensational, the artistry or the music, is beyond the point. Unexpected Shadows (Pentatone), the all-Heggie recital from mezzo-soprano Jamie Barton, composer/pianist Jake Heggie, and cellist Matt Haimovitz, is destined to win multiple “Best Vocal Recital of the Year” awards as it makes the best possible case for the necessity and relevance of modern American classical song. 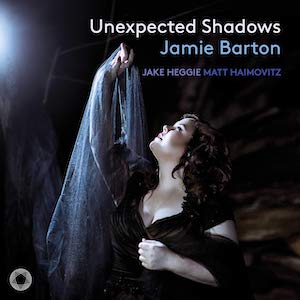 Everyone is in peak form on this recording. Barton purrs, croons, divas, and screams her way through four complete song collections along with the song “Music” from The Breaking Waves collection to texts by Sister Helen Prejean (Dead Man Walking), and the short “Ice Cube Aria” from Heggie and Gene Scheer’s recent opera, If I Were You. Her huge range and power allies with a larger-than-life personality. Heggie, who was clearly encouraging Barton to perform at her best, holds his own with stellar pianism whose ferocious vitality must have kept Skywalker Studio’s piano tuner very busy.

The full scope of this duo’s genius is on display in the contrast between grave songs that deal with fundamental issues of life and death, and the lighter ones that make fun of man, beast, and artistic creation itself. The former include “Music,” which reflects on the story of Dead Man Walking; the three songs of The Work at Hand, which document poet Laura Morefield’s emotionally bare journey through terminal colon cancer; and most of Iconic Legacies: First Ladies at the Smithsonian (texts by Gene Scheer).

The latter cycle, composed for Susan Graham in 2015, focuses on four Presidential wives who reflect on iconic objects at the Smithsonian: Eleanor Roosevelt on the mink coat that contralto Marian Anderson wore as she sang on the steps of the Lincoln Memorial, Mary Todd Lincoln on the hat that President Abraham Lincoln wore the day he died, and Jacqueline Kennedy on the White House Christmas card that she and JFK signed just hours before her husband’s assassination. Barton seems to sing from the souls of all three women — her rendition of Jackie’s song is devastating, with the high-set line, “Oh Jack!” filled with desperate longing — before turning on a dime to fully embrace the humor and charm of First Lady Barbara Bush’s literacy campaign alliance with the Muppets.

For drollery, look no farther than Heggie’s setting of Gavin Geoffrey Dillard’s Of Gods and Cats. Taking a break from some of the gay sexual poetry for which he is known, Dillard mixes cats, children, and mythological kingdoms in the most playful way. Heggie has a ball with Dillard’s delights, and Barton is right there with him on the playground.

But the best is yet to come. For the one-two punch(line), as it were, Heggie returns to Statuesque, the cycle about famous statues created for the superb character mezzo Joyce Castle. Armed with Gene Scheer’s texts, which are alternately evocative, coy, naughty, and side-splitting, he and Barton treat the first four songs as warm-up for “Winged Victory (We’re Through!).” Anyone who still thinks that feminists (or queer/ bisexual folk, for that matter) lack a sense of humor needs to hear this: Barton and Heggie’s tour-de-force performance will have them on their knees, begging for mercy and forgiveness.

I was begging as well — for breath, I was laughing so hard. You have to hear this capper to one of the most brilliant vocal recitals you are likely to encounter this year or next. Barton’s doesn’t have the subtle, nuanced artistry of the greatest art song interpreters, but when emotion and instinct triumph over intellect, she’s often marvelous and her interpretive and vocal brilliance deserve a place alongside theirs. If you can play back hi-rez files, by all means afford yourself of the additional timbral richness and body that the 24/96 files provide. All the more to treasure.

Brilliant Merolini were more than up to the rich challenges offered in the commissioned If I Were You.