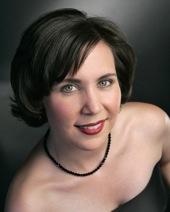 In recent years, soprano Jessica Rivera has emerged as a singer of remarkable vocal abilities; the Southern California native is also a committed advocate for contemporary composers. She impressed on both counts in a wide-ranging recital Sunday afternoon on the UC Berkeley campus.

The highlight of Sunday’s event, presented by Cal Performances in Hertz Hall, was the West Coast premiere of Mark Grey’s Ātash Sorushān (Fire angels.) Rivera, joined by pianist Molly Morkoski and the Ensemble Meme under San Francisco Symphony Resident Conductor Donato Cabrera, gave the new work a probing account. It was written to commemorate the tenth anniversary of 9/11, and incorporates texts by Niloufar Talebi.

Still, it was Grey’s new score that generated the most interest from the audience and elicited the most vivid response from Rivera.

Music lovers who have followed the soprano’s career could hardly be surprised. Rivera, who made her Santa Fe Opera debut in 2005 singing the role of Nuria in Osvaldo Golijov’s Ainadamar, has been a forceful advocate for new music by Golijov, John Adams (who was in Sunday’s audience), Esa-Pekka Salonen, and others. Her Bay Area appearances — with Michael Tilson Thomas and the San Francisco Symphony, and with the Berkeley Symphony under Joana Carneiro — have left no doubt as to her affinity for contemporary works.

Sunday, Rivera was at the center of a small maelstrom in Grey’s music. Composed in four movements for soprano and a seven-piece ensemble — string trio, woodwinds, piano, and percussion, with prerecorded voice and an electronic soundscape — Ātash Sorushān is an epic tale drawn from Zoroastrian tradition and featuring a female character, Mana (the Persian name for divine life force), and her male counterpart, Ahsha (an East Iranian word for truth). In Talebi’s poetry, these “angels with a message of purification and peace” assume mythic proportions: meeting, struggling, conjoining, and ultimately transcending.

Grey’s 20-minute score, fresh from its world premiere at Carnegie Hall, alternates between moments of frenetic activity and otherworldly serenity. It also poses myriad challenges for the vocalist, who sings her elaborate parts in English and Persian, with wide intervals and dynamic extremes over an often-agitated instrumental backdrop. Rivera handled it all with tonal sheen, dramatic urgency, and tremendous poise.

Rivera and Morkoski opened the program’s first half with Schumann’s Frauenliebe und -leben. The setting, of texts by the German romanticist Adalbert von Chamisso, portrays “A Woman’s Love and Life” through courtship, marriage, motherhood, and the death of her spouse; if the transitions are a bit abrupt, the writing is lovely (the cycle was one of several pieces Schumann composed as wedding gifts to his wife, Clara). With sensitive accompaniment from Morkoski, Rivera sang each setting with pointed expression, moving from the soft, yearning tone of “Seit ich ihn gesehen” (Since seeing him) to the desolation of “Nun hast du mir den ersten Schmerz getan” (Now you have caused me my first pain).

While the Ariettes oubliées, Debussy’s delicate settings of poems by Paul Verlaine, are favorites of many recitalists, Rivera and Morkoski imbued them with a deeply personal flavor. “Cest l’Extase” (This is ecstasy) came across on strands of silken tone, and “Il pleure dans mon Coeur” (Weeping in my heart) was suffused with longing. “Paysages belges: Chevaux de bois” (Belgian landscapes: Wooden horses), with its pastoral depiction of “Sunday fun,” is always charming; Rivera brought it to life in living color.