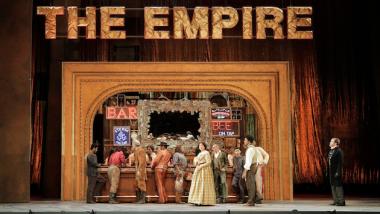 If you’ve followed the career of John Adams for any length of time, you know that given a great text, the composer writes great music. Harmonium, his 1980 choral-orchestral work, sets Emily Dickinson and John Donne. His setting of Donne’s Holy Sonnet, “Batter my heart, three person’d God,” was perhaps the greatest highlight of 2005’s Doctor Atomic, a previous San Francisco Opera commission. And Alice Goodman’s witty, probing, and poetic libretto spurred the brilliance of Nixon in China, Adams’s pathbreaking first opera.

How you feel about Girls of the Golden West, the composer’s new opera, which opened on November 21 at San Francisco Opera, will be deeply entwined with how you feel about the libretto. Ever since Goodman left the creative team of Doctor Atomic, all librettos for Adams’s stage works have been provided by director Peter Sellars, whose method of creating a libretto is that of a magpie: he rummages in historical texts and edits them into a narrative.

I use that word quite deliberately. For a man with a degree in theater and nearly 40 years of directing opera, Sellars has lost sight of two basics of theater: show, don’t tell; and, well, people on stage have been known to talk to each other. The libretto of Girls of the Golden West, set in 1851 and culled from the writings of Mark Twain, Frederick Douglass, Argentine poet Alfonsina Storni, Louise “Dame Shirley” Clappe, James Williams, and several vernacular song collections, largely consists of second- and third-person narratives. There’s way more telling than showing, and the lack of first-person emotional response and interaction among the characters distances the audience from the powerful situations unfolding on stage.

And that’s a pity, because the texts chosen put a fascinating collection of individuals on stage. The plot, such as it is, revolves around historical events taking place in Rich Bar, in California’s gold country, mostly as recounted in letters written by Dame Shirley to her sister. There’s enough conflict for two operas in those letters, given the volatile mix of gold, sex, and racial strife in the region’s population of Mexicans, Native Americans, African Americans, and whites. Racial hatred shows its ugly face in the terrible poverty of the Native Americans, the buying and selling of Chinese prostitutes, the near-lynching of an African American, and the torture of Mexicans. A woman defends herself from a rapist and is swiftly executed for murder.

And yet despite this rich potential, Girls of the Golden West comes up dramatically and musically short. Sellars strings together a series of vignettes to create the first act, introducing a sizable cast of characters but doing little with them. Somehow, although the opera’s title implies a focus on the women of Rich Bar, a majority of the music and narrative seems to be performed by and about the men.

Adams, struggling to provide some direction to the run-on narrative, composes an unfortunate quantity of run-on music. The opera’s sound world is typical Adams: You could never mistake the syncopated blocks of orchestral sound, scrims of divided strings, and threatening low brass for anyone else. But without well-structured text to set, most of his vocal writing becomes directionless and unmemorable, with too many phrases ending in the same mannered way, with a drop of a tritone, sixth, or octave. With the exception of the miners’ choruses, sung with forceful vigor by the men of the San Francisco Opera Chorus, there’s little of the rhythmic imagination and vitality of Adams’s best work.

But the composer of Nixon in China does come to the fore from time to time. He writes a lovely duet for Josefa Segovia and her lover Ramón, recalling a languorous afternoon together, and a haunting setting, sung not long before a fatal stabbing, of Macbeth’s “Is this a dagger that I see before me?” He gives the former slave Ned Peters an aria of tremendous power, drawn from Frederick Douglass’s speech “What to a Slave is the Fourth of July?”

Baritone Davóne Tines’s magnificent delivery of that aria is among the opera’s musical high points and also a point of frustration that exemplifies the dramatic issues in this opera. Immediately after the aria, Ned is dragged off by a mob, and we hear from Dame Shirley, but we don’t see, that only the pleading of his friends saves him from being lynched. It’s the last we see of Ned, whose abrupt exit means the audience has no closure with a character we’ve come to love.

Whatever the weaknesses of Girls of the Golden West, San Francisco Opera has engaged a cast of brilliant young singers to perform it. Dame Shirley is very much at the center of the opera, a lively, knowing observer of and participant in the Rich Bar goings-on. Debuting soprano Julia Bullock portrays her sympathetically and sings with a radiant, plangent tone. The sweet-voiced tenor Paul Appleby sings ardently as Joe Cannon, a miner recovering from a broken heart while entangled with Ah Sing, a Chinese prostitute. Soprano Hye Jung Lee looked good and acted well as Ah Sing; her slender lyric soprano sometimes took on an acid edge.

Mezzo-soprano J’Nai Bridges sang Josefa Segovia with glowering intensity and a beautiful dark tone. Baritone Elliot Madore was subtle and courtly Ramón. The bass-baritone Ryan McKinny, who sang Nixon in the Adams opera earlier this year at the Los Angeles Philharmonic, also made an impressive debut as Clarence, a character who participates in the action but is also something of a Greek chorus. He delivered Macbeth’s soliloquy with chilling power.

David Gropman’s spare set design is something of a puzzle. There’s not much in the way of scenery and props, and much of what there is appears briefly and exits quickly, including a stagecoach, a bed, a table, a chest, a mantelpiece, and a (fake) mule on wheels. Tree trunks double as cottage doors. During the second act, an enormous (and surprisingly mobile) tree stump takes up nearly half of the stage, providing a platform for dancers but limiting the movements of the principal singers and chorus. Rita Ryack has designed beautiful, well-researched, costumes for each station in life represented in the opera.

Sellars, directing as well as writing the libretto, has decided to leave the wings visible to the audience and most of the stagehands in modern dress. I found their comings and goings, and various movements in the wings, distracting. Sellars’s direction of the performers is serviceable, but doesn’t show much special insight into their characters.

Grant Gershon, director of the Los Angeles Master Chorale and resident conductor at the LA Opera, has long experience with music of John Adams, and did a terrific job with a complex and difficult score, as did the San Francisco Opera Orchestra. Special kudos to Clark W. Fobes, for his star solo on E-flat clarinet during Lola Montez’s spider dance and to principal clarinet Jose Gonzalez Granero for beautiful work elsewhere in the opera.

Overall, Girls of the Golden West is a dispiriting experience, given the potential in the source material and John Adams’s enormous compositional skills. The opening night audience applauded politely at the curtain, but with nothing like the wild enthusiasm that greeted 2012’s Nixon in China. Seven performances remain. If you’re an Adams completist, a California history buff, or you’d like to see a superb cast doing its best without nearly enough to work with, by all means, take one of them in. Otherwise, you might want to rent a video of Nixon and stay home with a work of undisputed genius.

Julia Bullock Gets to the Heart of Things

The rising soprano reflects on her evolution as a singer and on preparing for her upcoming role in Girls of the Golden West.