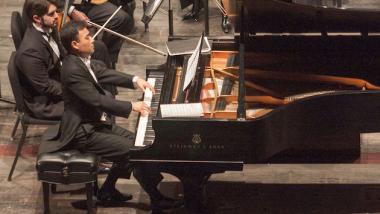 Carlos Vieu conducted Symphony Silicon Valley in a bold and vivid program of a variety of music on Friday, March 16. I heard it from the front balcony of San José’s California Theatre, always a sonically exciting place to sit.

Pianist Jon Nakamatsu was the headliner, but not the only soloist of distinction. Many orchestra members stepped up admirably. The caressing, offstage trumpet of John King in Respighi’s Pines of Rome, an exotic, North African-sounding turn on English horn by Patricia Emerson Mitchell in the same work, the surefooted flute of Sarah Benton in Debussy’s Prelude to the Afternoon of a Faun, the cool, brassy French horn of Meredith Brown in Inocente Carreño’s Margariteña, and a grand melody from the entire rejuvenated cello section under Evan Kahn in the same work were particular highlights.

Nakamatsu’s piece was Beethoven’s Piano Concerto No. 3. Vieu led this in the emphatic style he brought to the entire program, never letting the listeners forget that the usually gently played opening movement is actually in C minor, Beethoven’s most heaven-storming key. Nakamatsu unleashed his tempered-steel drill-bit persona to keep up, rumbling deeply through even his opening runs in order to catch attention. His trills and accents gleamed fiercely. By contrast, the slow movement was the soft and melancholy one, even though it’s in the major mode. Here Nakamatsu was gentle yet simultaneously energetic. The Rondo finale split the difference in mood, cheerfully and enthusiastically jumping into each new section.

Nakamatsu responded to the audience applause with a wistful, almost fragile rendition of his encore, Schumann’s “Of Foreign Lands and People” from Kinderszenen.

Two smaller works staked out distinctive places in the color spectrum. Debussy’s Prelude was presented as the opposite of impressionistic. It was filled with bright, primary colors and played with a strong dramatic arc, perhaps as if it had been written by Richard Strauss. Benton and the other soloists proceeded with confident, straightforward aim rather than rhapsodic wandering.

Carreño was a leading Venezuelan composer and one of Vieu’s mentors. Margariteña, his most popular work, dates from 1954 and is a symphonic development of folk tunes from the Isla Margarita, Venezuela’s largest Caribbean island and the composer’s birthplace. Some of these tunes are dancelike, but the work is principally songful, lacking the rhythmic snap of more familiar Latin American bonbons by the likes of Ginastera or Márquez. It is, however, a pleasing piece, orchestrated with intense color and crafty skill, particularly in blending in the brass — often muted —with the rest of the orchestra. Carreño was himself an orchestral horn player and shares the skill of other composers who have sat in the back of the orchestra in knowing what to do with the players back there.

After the elegance of Margariteña, the orchestration of Respighi’s Pines of Rome seemed blunt and slightly crude, even in the cold and damp Catacombs movement. (Most of the evening’s few playing flubs were saved up for this piece, also.) What it actually was, though — and properly so — was not crude, but shameless. As the Roman soldiers march in titanic splendor down the Appian Way in the work’s finale, it’s best to forget that Mussolini had already been installed in Rome when this music was written in 1924, and just glory in the moment.

The Symphony certainly did that. During the finale, as the music got bigger, Vieu’s conducting got broader. For an extra spatial effect, he brought in a few brass players posted in tiny “Juliet” balconies on the upper side walls of the theatre. But it was not just in the finale that the Pines of Rome was massive. The Catacombs rumbled with Nakamatsu-like depth, the children in the Villa Borghese played raucously, and that nightingale recording in the Janiculum boomed out as if the bird weighed 40 pounds. This concert was a big, exciting show all the way through, and the Respighi was primed to sear that in the audience’s memory.

Symphony Silicon Valley’s showcase of Hungary came in an exploration in the obscure but worthy corners of the repertoire and a young and dazzling solo performer. Three works by modern Hungarian composers of the same generation, plus three by foreigners evoking the country, were saved from being too much of the same thing by liveliness and a riot of orchestral color.