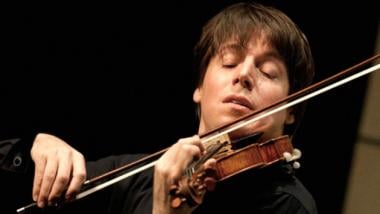 Joshua Bell wowed audience and orchestra members alike with his performances of the Tchaikovsky Violin Concerto this weekend. The packed Davies Symphony Hall could be heard breathing a collective sigh of amazement as he finished a flawless and captivating first movement cadenza. Violinists on stage could be seen shaking their head in awe tinged with bewilderment.  To hear a musician of Bell's caliber can be as humbling as it can be inspiring.

Bell was virtuosic as ever, with his signature, confident stage presence and sweet tone in all registers. The clean accuracy with which he hit the high notes and harmonics in the highest register was just stunning. Though performed every single year, the Tchaikovsky concerto was vitalized and passionate, and Maestro Pablo Heras-Casado and the San Francisco Symphony responded with equal vigor. Bell was sporting a black vest over a skin-tight plum-colored shirt, which was soaked to the elbows with perspiration by the end.  Apparently, he gave it all he had that Friday night, returning for the fourth and fifth curtain calls without his instrument despite audience pleas for an encore.

The other half of the concert featured two "chamber symphonies," one by John Adams (1992) and one by Arnold Schoenberg (1906). In the Adams piece, a rock drum set and keyboard synthesizer were relegated to a distant corner of the stage while a small chamber orchestra of double woodwinds plus four strings was huddled closely together about 20 feet away. The music is intricate with myriad counter-rhythms bustling against each other, which is probably why the players on the pre-20th-century instruments didn't want their ears dominated by the loud percussion and synths.

The two instrument categories occupy different sound worlds and hit the ear with a different sort of attack. The first movement, Mongrel Airs, basically sounded like a difficult rhythmic exercise with loud metronomes. As the piece wore on, the musicians found their groove and sonic balance. Associate Concertmaster Nadya Tichman's third movement cadenza, which lead to intense jabbing from the double bass, contra-bassoon, and low register electronic keyboard, was a particular highlight.The lush sound of the large string section was a welcome change from the Adams piece, in which the one-per-section strings scraped and struggled not to be covered by the woodwinds.

Schoenberg's chamber symphony was performed as a full-orchestra arrangement so the "chamber" in the title technically doesn't apply. The lush sound of the large string section was a welcome change from the Adams piece, in which the one-per-section strings scraped and struggled not to be covered by the woodwinds (Perhaps the strings should have been amplified slightly to blend better with the synths). On the other hand, it would have been interesting to hear Schoenberg’s seldom-performed original, smaller instrumentation.

In this larger version, the brass shone through with staircases of perfect fourths crisscrossing a thickly harmonized and rhythmically restless undercurrent of notes. Heras-Casado enticed a passionate sound from the orchestra throughout the concert, which spanned three distinct eras: the purely romantic Tchaikovsky, full of triadic European grandeur; the fin-de-siecle Schoenberg bursting at its harmonic seams and looking to orchestral colors for expression; and the late 20th-century Adams, more obsessed with rhythm and texture than harmony.