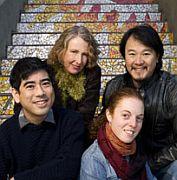 Michelle Dulak Thomson on February 5, 2008
In a Bay Area music scene crammed full of resolute, relentless eclectics, the Del Sol Quartet stands out less for packing bewilderingly various elements into its programs than for doing it with such ease and stylishness. The Del Sols' grand mélange of a recital Tuesday night, courtesy of Berkeley Chamber Performances, reprised its Old First Concerts program of a couple months back. For a packed audience in the ballroom of the Berkeley City Club (more chairs were needed, and obtained), the ensemble and two guests, clarinetist Jeff Anderle and didgeridoo player Stephen Kent, presented a quartet of pieces divided by wild extremes of geography and united by the intensity of their colors and the vividness of their gestures. The first half of the program was dominated by Australian composer Peter Sculthorpe's 16th String Quartet. Several of Sculthorpe's later quartets contain optional parts for didgeridoo, the Australian aboriginal wind instrument whose startling low drones are kept going by circular breathing. Kent and the Del Sols gave this one its didgeridoo-included premiere a little over a year ago at San Francisco's Other Minds Festival. The piece is in five brief movements, the didgeridoo appearing in all but the central one. Its subject is the experience of asylum-seekers — mostly people who fled Afghanistan and its environs in the wake of 9/11 and the U.S.-led war against the Taliban — who reached Australia only to be held in remote internment camps. The odd-numbered movements take their thematic material, Sculthorpe writes, from "an ancient love song from Central Afghanistan." The intervening movements are brusque scherzos titled, respectively, "Anger" and "Trauma." From the quartet came yearning, passionate strains, moments of eerie calm, and strange birdcalls. Sculthorpe seems particularly fond of the "seagull-cry" effect that a cellist can make with a glissando in artificial harmonics (a device first introduced into a piece, I think, by George Crumb in his 1971 Vox Balaenae). But in addition to the gulls there came flocks of other, weirder fowl; the end of the fourth movement was beset by them, chattering and squawking sul ponticello. The didgeridoo most obviously anchored the music with its powerful low drone (on three different pitches over the course of the piece), but there were subsidiary effects — not only the wash of higher harmonics that is the instrument's most characteristic sound, but also a startlingly physical rhythmic huffing in places and, once, a wild call like an elephant's bellowing. The last movement, "Freedom," is meant to represent "dreams of a free life beyond confined spaces and razor-wire fences." The opening, though lovely, initially affected me as cheap: Here was the Afghani tune of the first and third movements, only now rendered in radiant major mode, all its anguish (and all its augmented seconds) vanished. Complexities and tensions crept in over time, though, and the music took on a richer sort of elevation. In places, the string harmonics and the wash of harmonics from the didgeridoo meshed in such a way that I couldn't tell which was which. It was heady stuff, and played with dedication and concentration.

Lately it has seemed as though you can't swing a cat in the Bay Area without interrupting a performance of Osvaldo Golijov's 1994 Dreams and Prayers of Isaac the Blind. Partly that's because the composer made a string-orchestra version of the string-quartet accompaniment as part of the Magnum Opus commissioning project, so that no fewer than three Bay Area orchestras programmed the piece last season. Partly it's because the original quintet version's performing history is dominated by the Kronos Quartet and the St. Lawrence String Quartet, both of which have recorded the work and both of which are based here. But mostly it's because the piece is neat enough, and its solo klezmer-clarinet role irresistible enough to a certain kind of player, that it really is getting played everywhere. And why not? Jeff Anderle, the clarinet soloist on Tuesday night, is a member of the bass clarinet duo Squonk and the bass clarinet quartet called Edmund Welles, both ensembles devoted to messing around with wonderfully improbable sounds (the quartet's cover of Spinal Tap's Big Bottom has to be heard to be believed). Certainly, nothing in the immensely demanding solo part of the Golijov daunted him. He cajoled, wept, insinuated, commanded, shrilled, prayed. An appalling spot near the end of the long first movement, when the bass clarinet shrieks at the inconceivable top of its register, found the audience almost frozen in terror. The Del Sols, for their part, conveyed the ecstatic sweep of the piece's long stretches vividly, while not stinting its stillnesses. There were places where the ensemble sounded overstretched — the string writing is often highly strenuous, and the violin-unfriendly acoustic of the ballroom can't have helped — but none where it faltered in character or understanding. For all the solo writing's brilliance and allure, this is a long piece (roughly 35 minutes), and a multilayered one, that needs expert handling to maintain direction. Anderle and the Del Sols pulled it off with panache. Surrounding the two big works were two slighter ones. Derek Bermel's Coming Together, for clarinet and cello, opened the program, played by Anderle and Del Sol cellist Hannah Addario-Berry. The piece is a study in glissandos and gestures, the two instruments approaching each other, commenting in increasingly insinuating ways, and ultimately joining in a rough, eager, ever-accelerating melee of groans and shrieks such that the listener has twigged to the title's double entendre long before the event in question occurs. (The composer writes: "The intimacy becomes disarming, like enduring the sound of cats in heat in the yard next door or overhearing a frisky couple in an adjoining hotel room." Indeed.) Anderle and Addario-Berry were gleefully shameless. Perhaps it was my imagination, but I suspected that both players got a kick out of hers being the low "voice" in the affair, his the high one.

Percussion to the Fore

After the Golijov on the second half, the five players stowed their instruments. They returned, together with Kent and a boatload of assorted Central American percussion instruments, to perform Arturo Salinas' 1995 Awiroma, "for six or more performers using percussion instruments." Del Sol violist Charlton Lee explained: "We went looking for a piece for didgeridoo, clarinet, and string quartet, and this is what we found." The piece is designed to be performed with audience-participation elements that are simple and few but that combine in fascinating ways as the performers' patterns shift out of sync with one another. I haven't seen so much fun made out of so little since In C. Awiroma began modestly with everyone on claves, and shifted successively to hand-clapping, shakers, and various small drums, the tempo getting a modest goose with each shift. At one point the players rhythmically whispered the names of myriad vanished northern Mexican tribes as they played. Ultimately the music shifted a final time, to the big congas and frame drums that had been playing the role of Chekhov's gun on the wall since the stage was set up for the piece, and the work ended, exhilaratingly, with a bang. Because there had been no audience participation in the Salinas piece, the ensemble threw some in by way of an encore. This was an Australian aboriginal chant, taught to an audience divided into high and low voices by Kent, and led by the six musicians, didgeridoo-accompanied, as they paraded down the aisle and out of the hall. It was a strange but apt ending to a joyously eclectic concert.