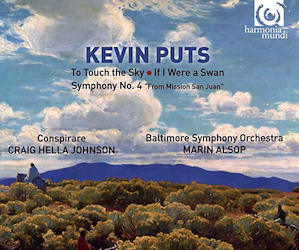 Ordinarily, reading program notes enhances your understanding of the music. Sometimes, though, there are things you are really better off not knowing. In the case of Kevin Puts' Symphony No. 4, I think I would have liked the piece better had I not known the plot.

The work is subtitled "From Mission San Juan," and was commissioned by a longtime devotee of the Cabrillo Music Festival, which gives concerts at Mission San Juan Bautista among other venues. Puts accordingly researched the history of the Mission, and discovered that it was called the "Mission of Music," because the friars taught the newly-baptized indigenous Mutsun Indians to sing Catholic liturgical music. Except that the pesky Indians persisted in also singing their own music.

In the second movement of the symphony, the battle of musics is played out in real time. Except that the Mutsuns' music is, well, close enough to copyright infringement on Carlos Chávez's Sinfonia India as to give one pause, while the friars, strangely, speak not in the accents of Baroque Catholicism but in the vein of the quieter bits of Copland's Appalachian Spring. I'm inclined to think that the quasi-Chávez is homage (the composer was himself director of the Cabrillo Festival in the early 1970s), but there's still something disquieting about the juxtaposition — the perky polyrhythmic music for the Mutsuns, the white-bread Americana music for the friars. When I put this disc on for the first time, having told my husband the plot, he called up from downstairs, "Save me, save me, 21st-century white composer!" It really is a bit like that.

But only if you know the plot; otherwise, it's a most eloquent and well-built piece of music, spacious and long of line, canny in its deployment of color (the man knows what to do with winds), and never miscalculating the shape of a movement.

But only if you know the plot; otherwise, it's a most eloquent and well-built piece of music, spacious and long of line, canny in its deployment of color (the man knows what to do with winds), and never miscalculating the shape of a movement. Not, that is, until the last, for which the program notes claim a "nigh-Mahlerian intensity" (it's good, but it isn't that). The ending is the oldest and dingiest trick in the concert band composer's repertoire: The brass hit the final chord, diminuendo, crescendo, and then everyone swats it together for the finish. As the end of a piece otherwise so full of incidents of many and subtler kinds, it's a bit of a let-down.

The rest of the program here is choral, and suffers a bit from the same spoiler problem. The 2012 choral song cycle To Touch the Sky, setting texts by female poets, is a lovely work, harmonically rather in the "aching dissonance" vein of Morten Lauridsen. The texts (which range chronologically from Sappho to Mother Teresa) are moving, the music equally so; the long final setting of Hildegard von Bingen's "O nobilissima viriditas" (Most noble evergreen; it's sung in English) is breathtakingly lovely.

But it's followed by a reprise of the opening music, to the first words of the Magnificat. It's a jolt, and was presumably meant to be one. And the explanation is there, again, in the program notes. "While the religious concept of the biblical Mary is for me purely mythological" — Puts has read a book by Andrew Harvey, and thinks of Mary as the ewige Weibliche, Woman with the capital W, as it were. Kali, Tara, Durga, the Tao. So the cycle ends with the opening of the Magnificat, as it begins.

There is some extremely interesting and inventive choral writing in there. Puts uses nonsense syllables and plosives to great effect.

There is some extremely interesting and inventive choral writing in there. Puts uses nonsense syllables and plosives to great effect. There are places in To Touch the Sky where there are swirls of phonemes that are like flocks of birds. And in the other choral work on the disc, If I Were a Swan, there is a rhythmicized clucking of sorts, that sounds like a woodwind section until you discover, eventually, that it's the sound of human tongues. That is a piece not soon to be forgotten, full as it is of joyously painful dissonance and, below it, that deliberate sense of time ticking past.

The performances here are terrific. Marin Alsop and the Baltimore Symphony do very well by the Symphony No. 4, and the choir Conspirare positively sings the pants off the two choral works, which were written for it.