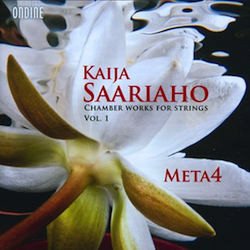 Kaija Saariaho seems better known now for big projects than small ones, but the piece that first got me interested in her work was one of the latter, a piece for solo cello titled Sept papillons (Seven butterflies) — a piece in which the cellist's left hand fluttered remarkably like a butterfly itself, alighting on harmonics and flitting around pitches with seeming nonchalance. That work isn't here in this first half of a two-disc survey of Saariaho's chamber music. But the music that is, is a fine, if occasionally jarring, survey of nearly a quarter century of the composer's work.

Saariaho has always been intensely interested in variety of timbre. When writing for ensembles as small as those here (the largest involves five players, including a controller of real-time electronics, while two are for solo stringed instruments), she reaches avidly for that variety wherever she can find it. So the string players here spend a lot of time on or near (or, occasionally, behind) the bridge with the bow, and a fair amount of time crunching the bow into the string so hard as to break the pitch. Add in the many microtones (pitches not in the pitch-system approximated by the piano keyboard), slow glissandos, rapid pitch alternations across strings, and the like, and we are in an edgy sonic environment indeed.

This is music that spends most of its time, one way or another, near the emotional and physical breaking point. The crunched and splintered sounds, all but ubiquitous in the slower parts of these works, erupt into positive mayhem at times. If the loudest and most violent of these episodes happens in the 1987 string-quartet-with-electronics Nymphéa, that's partly because five people can make more noise than two, and partly because the electronic enhancements (which work off the live sound, as well as adding elements of their own) sometimes make you think you're hearing 30 people rather than five.

In that sense, the work is a lot more like Saariaho's orchestral music than it is like its companions here. There's a density of incident that's nowhere else in this collection. And what incident! There are some eruptions of texture in there that sound as though a cadre of superintelligent squirrels have gotten into the collective works and are just seeing what they can do. It's fascinating, indeed mesmerizing, and wholly unlike anything I've heard before; you often really can't tell what's live and what isn't, and there's a sort of acoustic halo around much of the undeniable string playing.

(The work was written for the Kronos Quartet, which I think was already, by 1987, playing only with amplification. But this isn't the sound I associate with Kronos; it's more as though the acoustic instruments and their delayed or manipulated shadows and an electronic element distinct from either are all slithering around one another in a place where anything might happen at any time.)

It's fascinating, indeed mesmerizing, and wholly unlike anything I've heard before ... there's a sort of acoustic halo around much of the undeniable string playing.

After that — or rather before it, since it's the last work on the disc — most of the other works sound as though they're afraid of seeming wan without the sonic superstructure. The other piece involving other than acoustic instruments, Vent nocturne for viola and electronics, is a long (nearly 15-minute) two-movement work in which the prevailing electronic sounds are of wind and breath, with an occasional sprinkling of pitch. The viola skitters in and out and turns microtonal pirouettes; the winds blow and sometimes seem about to speak, and yet not all that much seems to have happened in the end.

The best of the shorter pieces, to my mind, is the 1997 Spins and Spells, a solo cello work written as a competition test piece. It involves scordatura (tuning the open strings differently from the ordinary tuning), and the combination of open strings lets Saariaho do all manner of fun things with what are called "natural" harmonics — ones built on the harmonic series of the open string, so you only need touch a point on the string lightly and you get a flute-like pitch far above it. That's not all there is to the piece, which gets gritty in its interior, but it's what will stick with me.

So will the broken, despondent Nocturne for solo violin, written in memoriam Witold Lutoslawski in 1994. Here the fractured, injured violin sounds Saariaho favors find their right context. I'm not so sure about the other two violin works here. The 2010 Tocar (like Spins and Spells written as a compulsory work for a competition) lays the sound effects on a bit thick, though the conceit of the violin and piano essentially circling around one another in search of common ground is a fine one. Calices, from a year earlier, is a bigger piece, in three movements, and with an interesting trajectory, more or less pockmarked with explosions all the way through, but dissolving into a simple, repetitive filigree at the last — glassy with ponticello and shot through with harmonics, but having achieved some sort of peace.

The string players are the Finnish quartet Meta4, which despite the unbearably cute name is a terrific ensemble, both all together and disassembled. (Democratically, the violin works are divvied up between the two players, with Antti Tikkanen getting Calices, while Minna Pensola gets Tocar and the Nocturne; violist Atte Kilpeläinen has Vent nocturne, and cellist Tomas Djupsjöbacka Spins and Spells.) Pianist Anna Laakso is nimble and sometimes downright ferocious in Tocar and Calices, and Marko Myöhänen handles the electronics in the two pieces using them.