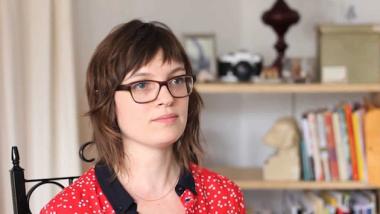 Occasionally in Katherine Young’s slam creak bzzz, the same electronic element, sounding both like deep bubbling and bird song, would whip past like a flag. In the electro-acoustic pieces, the electronics blurred into busy muttering from the string quartet, but this sweeping sound stood out, adding an organic element that was less present in the other works. By the middle of the quartet I could see a dark camp site, bright in the middle and surrounded by rich, moving darkness.

Katherine Young, wasteLAnd’s featured composer this season, is a Chicago-based composer, improviser, and electro-acoustic bassoonist. wasteLAnd opened and closed their sixth season with full concerts of her music at Art Share L.A., last night’s consisting of all string quartet or trio pieces. The concert had an immersive continuity to it, and the Formalist Quartet, which specializes in collaboration and premiering new works, drew all the pieces tightly together. At first, I thought I might become oversaturated by Young’s noise-centered approach to string writing, but the consistency allowed me to sink deeper into her vocabulary, and to hear more than I would have had only one of these works been programed.

Her vocabulary of string techniques ­— bowing on the body of the instrument, grinding the bow into the string, playing behind the bridge, etc. — was markedly uniform between the pieces, to the point where I wondered about the intentionality of this similarity. In her earlier quartet Inside UFO 53-32 (2007), the sparseness of the writing and the fact that most of the sounds produced were pitchless made some passages seem like an index of extended techniques. Looking back, this piece acted like a crash-course in Young’s string language for me, and I can appreciate more the crispness of certain passages, like the articulated air sounds, feeling very much like an empty, steamy engine room.

It is hard to not hear these special techniques as simply the byproduct of an unusual action. If the violinist bows on a tuning peg, a sweet small pitch might result. If the cellist jiggles her knee into the instrument while bowing a pitch, an interesting stuttering rhythm will result. However, people tend not to think in this way about “normal” playing, in these “if/then” statements. If a violist bows on a string while depressing that string with a finger on the left hand and oscillates that finger up and down the string a pitched vibrating note will result. No, we tend not to think about it that way.

Through the evening Young’s pieces turned my ears around. Though the majority of the playing was in the form of extended techniques, I began to hear her supple sound-melodies, to lose these distinctions between noise and pitch. Near the end of her string trio bow, breath, crow (2016), I fell in love with this passage that was made up of an electronic element that sounded akin to a propeller underwater, microtonal chords grinding balefully out of the cello, and inching high intervals between the violin and viola. The pitch content of this passage had crossed over into the realm of noise, but in Young’s world all noise is emotional. This passaged gelled into something tragic and steady, and I was happy to feel yearning distinctly from the distant thudding coming from the speakers.

The second half was opened by Young’s loving arrangement of a 1986 Arthur Russell piece called Hiding Your Present From You. She managed to faithfully bring this cello, electronics, and vocal track to a string quartet, retaining the lanky sweetness of the original. Both versions are highly recommended.