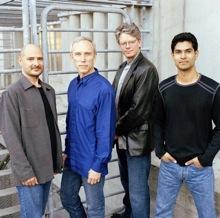 When planning programs for classical concerts there are two basic approaches: variety show (something classical, something Romantic, something “modern”, usually in chronological order), or themed concerts (e.g. all-Beethoven concert, all-Russian concert, Gypsy-inspired music, etc.). Order and balance on the program is crucial, setting the dynamic arch of the entire concert; choosing and ordering pieces is a form of musical composition

The Kronos Quartet have taken program-planning to a new level, stitching together works by 12 different composers, played without pause and with carefully planned segues. In doing so the group essentially created a new 90-minute masterpiece: Awakening, a “musical meditation on the anniversary of 9/11.” The program was first played on Sept. 11th, 2006 at Herbst Theatre and was repeated in Memorial Auditorium on Wednesday, Oct. 13, 2010 as the opening concert of Stanford Lively Arts’ 2010-2011 season.

It has been almost a decade since America was attacked. Since then 9/11 has been the subject of political controversy, political opportunism, humor, profiteering, and what not. So much has been made of that day that we often forget the emotions we felt on that day. Awakening brings back those memories through diverse approaches ranging from subtle to direct.

As always, Kronos takes hold of the entire concert-going experience, not merely chunks of music framed by coughing, chair-shifting, and clapping. The entire production leaves an impression, not just the musical message: Lighting work by Laurence Neff for truly moving visual effects and spotlights, and amplified sound design by Scott Fraser massively expands the string quartet’s aural possibilities. Stage design, choreography, and costume (jeans and sport coats rather than the outdated tuxes) were also an artistic touch. Recorded music was played in the hall as the audience filed in, setting a different tone (the concert begins before the performers walk on stage) and preparing the audience. The Kronos Quartet walks on stage accompanied by electronic sound effects and turned-up recordings in lieu of the conventional applause procedure.

Awakening is divided into three unnamed segments, each with a different overall mood, corresponding to emotions felt in time of trauma: sadness, anger, and finally acceptance. The three sections also highlighted three streams of contemporary classical music that the Kronos specialize in: ethnic-inspired world music, electronic/noise-music, and minimalism. All of the pieces on the program were written or arranged specifically for the Kronos Quartet.

The first section featured four short pieces from Central Asia: Awakening by Dmitri Yanov Yanovsky from Uzbekistan; Oh Mother the Handsome Man Totures Me, an Iraqi song arranged by Ljova nad Kronos; a traditional Iranian melody arranged by Jacob Garchik, and Raga Mishra Bhairavi: Alap by Ram Narayan from India. Common to all these pieces were static drones like the emptiness of a desert, topped by layers of sound and long meditative melodies imbued with a devout spirituality. In the context of the 9/11, reference to Islam is unavoidable; the connection between the intensely spirituality in these melodies in context of Islamic fundamentalism is material for heavy reflection. The melodies’ haunting and moving power is undeniable.

It was a bit difficult to distinguish between pieces as they were played atacca and were eerily similar, but some memorable moments stuck out. In a stroke of versatility and open-mindedness typical of the Kronos Quartet, second violinist John Sheba picked up the Indian sarangi, a knee-mounted stringed instruments, while violist Hank Dutt played one of the longest, most arresting and powerful viola solos I have ever heard, aided by a hefty dose of electronic reverb and delay effects.

The second half of the concert got to the dark violent core of 9/11, with Einstürzende Neubauten’s Armenia, Oswald’s Spectre, and Michael Gordon’s The Sad Park. Armenia again broughtout the Kronos versatility and open-mindedness, as members left the quartet’s traditional semicircle to hammer on bits of scrap metal strewed artfully around the stage. The chaotic metallic surroundings could have been an industrial waste site but also resonated with images of ground zero after the attack. At one point, cellist Jeffrey Zeigler picked up an electric circular saw and grinded it against objects on the stage, sending sparks everywhere. The grating sound produced was not unmusical, especially when heard in a concert setting. Seeing a sharp blade spinning close to such a special musician’s fingers was nerve-racking. Gordon’s piece featured recordings of children describing 9/11 with sentences like “there was a big boom and then there was teeny fiery coming out” played on repeat over the speakers while the quartet played percussive repetitions.

The final third of the concert featured a return to the meditative mood from the first third, though this time from a different angle and with spirituality that felt more Western-secular as opposed to Middle Eastern religious in works by Osvaldo Golijov, Gustavo Santaolalla, Terry Riley, Aulis Sallinen, Vladimir Martynov, and a Swedish traditional arranged by Kronos. Patterns of rhythm and intervals that at first sound alienating are repeated in a minimalistic hypnosis that turns hostility into comfort. For the Swedish song, the Cantabile Youth Singers walked on stage one by one like little angels dressed in street clothes. They sang with a sweet, eye-watering beauty.

9/11 can be remembered on any day of the year, not only on anniversaries and designated memorial days because, as Kronos first violinist David Harrington writes, “Most of carry within ourselves an alarming movie replaying the events of Sept. 11, 2001. In Awakening Kronos offers a new soundtrack to this internal movie.”