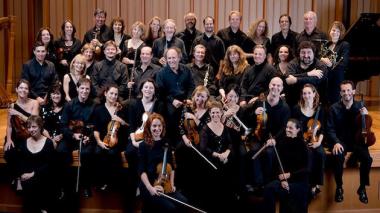 The same week the Los Angeles Chamber Orchestra (LACO) announced that Spanish flutist/conductor Jaime Martín would become the sixth music director in the orchestra’s 50-year history, the ensemble performed a concert at UCLA’s Royce Hall that was totally professional in its music making and surprisingly and embarrassingly amateurish in its inattention to the concert program.

The concert opened with a premiere commission by Los Angeles composer/sound designer Ellen Reid. And if you were able to arrive an hour before the 7 p.m. curtain time (which I was not), you would have heard a discussion of the new work including its title, Petrichor. Otherwise, you were left in the dark.

LACO season brochure went to press so long ago it wasn’t possible to include any details about the piece beyond two cryptic comments by Reid that it was spatial and musicians “will be scattered all over the hall.”

The evening’s conductor, Douglas Boyd, did not discuss the piece before the performance but referred the audience to the program insert. There was no insert. Reid’s Petrichor did, as she said, splay little groupings of musicians throughout the hall — violins to the left, winds to right, a horn in the balcony, with the remainder of the orchestra clustered on stage.

It began, like several other new works I’ve recently heard, with a series of dawn-like twitterings that slowly built to a blazing orchestral climax. Gentle murmurings, soft trills, and melodic chirping came from all around the hall. When the inevitable crescendo came, Reid used the opportunity to switch tonal gears from dulcet consonance to growling dissonance, with the onstage orchestra offering a succession of full-voiced, ominous tones.

Exchanges were volleyed around the hall ending with a return to a melodic section in the upper register that ended the piece like so many twinkling stars.

Boyd referred the audience to the poems printed in the program for Benjamin Britten’s Serenade for Tenor, Horn, and Strings. There were no poems, which left people fruitlessly searching page by page during the performance. The program did state that Benjamin Britten was born in 1936. He was born Nov. 22, 1913. Had he been born in 1936, he would have composed his 1943 Serenade at the age of 7. I struggled to decipher the words Thomas Cooley was singing, however sweetly his high tenor voice sounded. The performance by LACO’s newly appointed principal horn, Michael Thornton, was a good deal crisper and cleaner.

The concert concluded with a performance of Joseph Haydn’s Symphony No. 104 in D Major (“London”). And in keeping with its program design, a photograph of the composer was included. Haydn, of course, died in 1809, 30 years before the invention of photography. The photograph was of Brahms.

The Baroque and Classical repertories have been the Los Angeles Chamber Orchestra’s bread and butter ever since it was founded 50 years ago by Sir Neville Marriner. The orchestra’s performance of Haydn’s final symphony restated the case, although Douglas Boyd’s tempos, particularly in the Minuetto, were so rapid they would have left actual dancers in the dust.

As LACO enters its second half-century it would be a good time to heed the words of the great modern architect, Mies van der Rohe, who pointed out, “God is in the details.”

Correction: As originally published, this review stated that Ellen Reid's composition began with prerecorded electronic sounds. The composer has clarified that all of the sounds in he piece were created on acoustic instruments.