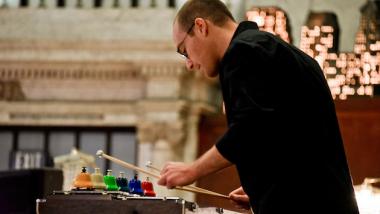 Now in its fourth season, the Kaleidoscope Chamber Orchestra, which was featured recently in the L.A. Philharmonic’s “Noon to Midnight” marathon, is one of several new orchestral ensembles that have emerged in Los Angeles. They maintain a “pay what you can” policy at both their concert venues: The Los Angeles Theatre Center, 514 Spring St. in downtown L.A. and First Presbyterian Church, 1220 Second St, in Santa Monica.

Made up primarily of highly skilled younger musicians, the ensemble’s concerts regularly combine works from the standard repertory with cutting-edge contemporary work. They have begun offering commissions, and this year Kaleidoscope will conduct its first international instrumental and vocal competition. Open to all ages from all countries, the winners will receive $15,000 in prizes, performances of their work with the orchestra, housing, and round-trip airfare to Los Angeles. The application deadline is April 1. For contest information and an application go to the Kaleidoscope website.

Sunday’s matinee concert in Santa Monica was a perfect example of Kaleidoscope at work. The program bookended performances of Mozart’s Trio in B-flat Major and Bartok’s String Quartet No. 5 with four West Coast premieres: Obliquely Wrecked (for violin, piano, and cello) and Alpha (for cello, percussion, string quartet, and tape) by Pascal Le Boeuf; Head to Toe (for glockenspiel and desk bells) by Molly Joyce: and Scallops and Bollocks for Tea (for violin and tape) by Melissa Dunphy.

The audience was unusual, combining seasoned aficionados with the musically naive. During a preconcert Q&A one man asked about the difference between a viola and violin. Without a hint of condescension, he was given a detailed answer and a demonstration. Though relatively small in numbers (100 maybe), it was one of the most enthusiastic, attentive, and appreciative audiences I’ve seen in a while.

The program was skillfully constructed, beginning with a lithe and melodic rendering of the Mozart Trio by Benjamin Hoffman (violin), Clement Chow (cello) and Irene Kim (piano).

It provided a nice comfort zone for many in the audience before heading into the complex tonalities and atonalities of Le Boeuf’s Obliquely Wrecked. Unfortunately, Boeuf was not in attendance because he was in New York attending the Grammys where his composition Alkaline — from the album Imaginist recorded by the Le Boeuf Brothers and the JACK Quartet — was nominated in the Best Instrumental Composition category. (He didn’t win.)

Performed with bravado by the same musicians that had delved in the Mozart Trio, Obliquely Wrecked is a six-minute crash course in classical form deconstruction. At times it ticks and pulses like an infernal machine. There are outbursts of string flurries and an emphasis on the piano played in various ways: traditionally, as a string instrument for strummed glissandos, or as a resonating chunk of wood.

The most intriguing aspect of the work is the way Le Boeuf dovetails the old and new, combining purely atonal interplay with passages, particularly from the piano, that reference the lushness of, say Brahms.

Le Boeuf’s other composition, Alpha, was considerably more hard-edged and assaultive in its combination of a rock/jazz drum kit and a big bass drum with cello, two violins, and viola. It is a work Le Boeuf describes as “a battle piece for cello and drum set” and was originally written for cellist Nick Photinos of Eighth Blackbird. It was played Saturday, with crafted hostility, by Clement Chow (cello), Jeff Stern (percussion), Alex Granger (viola), with Benjamin Hoffman and Chiai Tajima (violins).

Head to Toe by Molly Joyce is a short, playful piece that combines bright, ringing mallet-driven pitches from a glockenspiel with five specifically pitched desk bells. It glistened in the church’s acoustically bright auditorium.

Though only around five minutes in length, Scallops and Bollocks for Tea from Australian Melissa Dunphy was the most fascinating piece on the program. It combines musical history, virtuosic writing for the violin soloist (Alex Granger), and aspects of video game lore. On the surface, it is a set of variations on the familiar tune of the Colonel Bogey March for tape and violin. But there is so much more going on. Dunphy explains.

Scallops and Bollocks for Tea is an homage to CSIRAC, one of the earliest computers, developed and built in the late 1940s by the Australian Council for Scientific and Industrial Research in Sydney. One of the engineers working on the project, Geoff Hill, was also a musician. And in 1951 he programmed CSIRAC to play some well-known tunes, making it the first computer to play music. This was no mean feat. Because of the nature of CSIRAC’s serial architecture, programming music into it was an arduous process as code was introduced to the machine via punched paper tapes. Among the first melodies played by CSIRAC was the Colonel Bogey March … It was never recorded. But in 2005 it was meticulously reconstructed from the original paper tapes.

The sample that Dunphy uses to open her piece is the recording made from the original tapes. The remainder of the pre-recorded portions were composed using sounds created by the Ricoh 2A03, the 8-bit microprocessor and programmable sound generator from a Nintendo Entertainment System video game console.

In those five minutes, Dunphy managed to cross-reference the pioneering days of computer-generated music, a popular tune from World Wars 1 and 2, along with Malcolm Arnold’s score for The Bridge on the River Kwai, and the playfully innocent birth of video game music technology. Performed superbly by Granger, it was simultaneously old and new. And according to Dunphy, there is a new movement evolving in which composers are using the old innards of Nintendo systems to compose new music. They call it chiptunes.

Performed without an intermission, the concert ended with the dark, shadowy textures of the Bartok Quartet. It sounded both comforting and surprisingly old.

Kaleidoscope’s upcoming concerts will take place Feb. 10 and 11 (with premieres by Viet Cuong, Aart Strootman, and Alyssa Weinberg); and March 10 and 11 (with new works by Nina Shekhar and Gregor Mayrhoffer); April 28 and 29 (premieres by Katherine Balch and David Hertzberg); April 12 and 13 (premieres by Donald Crockett and Christopher Cerrone).