The 16th century saw Europe rocked by schism, as Luther’s challenge of reformation attacked Rome’s domination of the Christian church. The struggle quickly escalated into war — ideological and military. Against the introspective rationalism of reformation, embattled Catholicism defended itself with a self-conscious appeal to emotion, and to that end, enlisted the greatest artists and musicians. 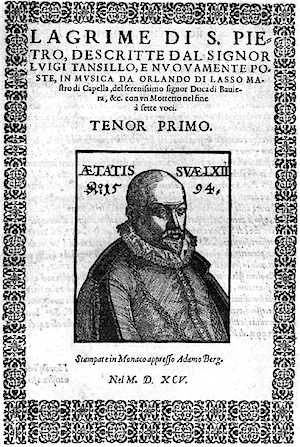 One of the masterpieces of Rome’s Counter-Reformation is Orlando di Lasso’s Lagrime di San Pietro (Tears of St. Peter), performed last week by the superb LA Master Chorale and presented by Cal Performances. Ironically, Luther himself would probably have thrilled to this probing presentation of Lasso’s emotional psychodrama of Saint Peter after his denial of Jesus on the night before the crucifixion.

Lagrime, written shortly before Lasso’s death in 1594, is an extraordinary creation for an old man racked by depression. Long by Renaissance standards (some 90 minutes in performance), it comprises 21 linked pieces of complex vocal music, with no instrumental accompaniment. Lagrime is as rich, as demanding — and as dark — as Shakespeare’s Lear, its near contemporary.

For all its status as a masterpiece, however, Lagrime is a daunting work to perform in the 21st century. We share with Lasso and his contemporaries neither the anxiety of those particular religious wars, nor a taste for the hyperbolic and mannered poetry of grief. Most importantly, our culture has little experience of the subtleties and power of Renaissance polyphony — music that we usually encounter as remote in its high-art elitism.

That was decidedly not the case with the LA Master Chorale performance, directed by the extraordinary Peter Sellars. This Lagrime was theatrically, poetically, and musically gripping, delving into the work’s emotionality with unabashed commitment. Twenty-one singers (three for each of the work’s seven vocal lines) sang the entire piece from memory, while the rich poetry of the text was projected onto supertitles (in an uncredited English translation).

Sellars staged Lagrime, without props, by inventing a rich throughline of gestures for the singers, who constantly moved about the bare stage, sometimes clutching their heads, embracing each other, or turning away in grief, sometimes angry, sometimes loving. Conductor Grant Gershon circled about and through the group; he too seemed a member of this imagined community of suffering bodies and souls.

The drama was in the music as well as the staging. Tempos, affects, and dynamics changed suddenly to highlight the cruxes of the text: loud and soft, angry and pleading, tender and despairing. Individually, each singer-actor projected his or her commitment to the music and to the staging. Collectively, they performed, with all the ensemble, blend, diction, and intonation one would expect from a great choir — even as they fell to the floor or clutched each other in twos and threes of shared despair and concern.

The singers, barefoot and dressed in ragged gray T-shirts and leggings, evoked the barefoot disciples and servants in the paintings of Lasso’s great contemporary Caravaggio: no elegant Renaissance saints, but street people hired as models and painted with all their scruffiness, yet enacting the great dramas of the ministry and passion of Christ.

It was impossible to hear this music as “merely aesthetic.” Blood, limbs, tears — the images that fill these Renaissance poems — became more than metaphors. Death, that over-used trope of Petrarchan love poetry, felt real when the singers lay on the floor like corpses.

As a psychodrama, the initial impact of Lagrime was strikingly personal, the anguish of a sinner-saint caught in a dark night of the soul. On reflection, though, it went beyond the personal to the political: even the most powerful amongst us live with daily reminders of their guilt, their failings, their betrayal of those they love.

That political message was apt in the 16th century, when Rome’s power was being seriously threatened. Lasso, after all, was writing about the first pope, the founder of the seat of Roman Catholic power. The composer refused to glorify that power, choosing rather to anatomize his heart and proclaim the saint-pope’s essential humanity, warts and all.

Some such powerful reminders of the humbling humanity of privilege are appropriate to the political climate of today, as well. In this performance, at least, Renaissance polyphony demonstrated that it can still speak truth to power.

Jenny Wong conducts works that grapple with the aftermath of death in different ways.

The groundbreaking director and librettist talks about his reimagined Perséphone, his fascination with Stravinsky, and the role of the artist today.