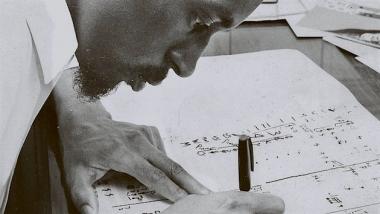 The Old First Concerts performance this past Sunday may have been the first time San Francisco has hosted a program of Julius Eastman’s works. But the Western classical-music subculture has been experiencing a revival of Eastman’s works for more than a decade. Composer Mary Jane Leach produced Unjust Malaise, a record of Eastman’s works for New World records in 2005, Leach and Renée Levine Packer edited a collection of scholarly essays about the composer in 2015 entitled Gay Guerrilla, the Otolith Group created a film about him in 2017, and, more locally, the Berkeley Art Museum hosted a concert of his works Evil Nigger, Gay Guerrilla, and Our Father in 2012. As the titles suggest, Eastman’s identities as a black and gay man are at the center of many of his compositions.

Except for Touch Him When — a piece of slowly unfolding musical gestures for piano, four hands — the first half of the program consisted of works with queered Christian themes. Prelude to the Holy Presence of Joan d’Arc, Our Father, and Hail Mary took Christian elements familiar to those raised with its rituals (Joan of Arc, the Lord’s Prayer, the rosary) and set them on edge using unusual sonic techniques of extreme repetition, parallel organum, or technology.

The musical content of Prelude to the Holy Presence of Joan d’Arc is a few short gestures and ornamental techniques for solo bass voice, the lyrics a single sentence cut up into fragments repeated again and again, with music and lyrics occasionally altered slightly. Richard Mix, a bearded and bespectacled bass, sang the work from Old First’s pulpit, bible open before him. After calmly listening to his tuning fork, he thundered the regally descending four notes that open the work: “Saint Michael said ...” Little by little, the whole text unfolded, “Saint Margaret said, she said, Joan, speak for me. When they question you, speak boldly.” The repetitions made new words and pitches visceral, doors to deeper states of engagement. Mix guided us all the way there, dropping to a powerful, low register where he deployed a thoughtfully quiet dynamic level. By the end, there was no doubt we were in for bold music.

Luciano Chessa and Regina Myers closed the first half with a beautifully uncomfortable realization of Hail Mary for megaphone and piano. Myers played the same, pedaled melody line on the piano as accompaniment to Chessa speaking a portion of the rosary quietly, slowly, repeatedly over the megaphone. “Hail. Mary. Full of. Grace.” Chessa dwelled on syllables, plosives sparking bits of sonic debris, clouds of overtones briefly hovering around aspirated moments. Heartbreaking and eerie feedback evoked an apocalyptic vespers service, the outside city noises adding to the effect.

The entire second half was dedicated to Eastman’s Crazy Nigger, an hour-long piece for four pianos using repeated notes and figures to build huge waves of sound — the modularity of Terry Riley’s In C uniting with the intensity of Charlemagne Palestine’s Strumming Music. Occasionally these waves fell down into single, repeated notes or repetitions at the octave, with a slow accumulation leading to the next wave. I oscillated between a sense of eternal now-ness during the beautifully crafted dynamic high points and expectation during the calmer portions. Not everyone stayed for the entire hour but those who did were treated to an extended climax grander than John Adams’s Hallelujah Junction and more thrilling than Handel’s “Hallelujah” Chorus. Planted audience members joined the four pianists on-stage, adding additional melodies to the already dense and full-throated polyphony. Bass octaves grounded the joyful myriad melodies like all the bells tolling at the highest festival.

The title deserves discussion, and I leave it to Eastman himself, who explained his use of the N-word, describing a project of reappropriation before a concert in 1980. To hear Eastman’s explanation, scrub forward to 3:07:28.

The concert at Old First is part of a re-engagement with Julius Eastman’s work and the composer himself. He is going through a process of canonization. The music is engrossing, the content often political and always thought-provoking. My vote is for Saint Eastman.