The LA Phil Strikes a Swinging Blow for Symphonic Ellington

Duke Ellington wanted to have it both ways. He longed to be legit, to have his music played in formal concert halls and to be recognized by the gatekeepers as a serious musician. Yet in doing so, he also wanted to keep his music firmly planted in his people’s jazz and blues roots, while also attempting to do things in those idioms that had never been tried before. As pianist Ethan Iverson wrote in his blog, citing Duke’s “Across the Track Blues” as an example, “Ellington expanded what was possible within the folkloric form. That’s part of what made him such a genius; he could find new shades of blue.”

Hence Symphonic Ellington, a series of extended pieces, usually cast in the form of suites, that try to give symphony orchestras something to play within the Ellington idiom. They have yet to establish a solid foothold in the repertoire everywhere, but that new world may be a-comin’ soon. As classical groups accelerate their inclusion of Black composers into the repertory, Ellington is increasingly seen as a composer who consistently stood up for the history and dignity of his people.

That day has already come for the Los Angeles Philharmonic, which back in 2019 staged a superlative Harlem Renaissance weekend, led by Thomas Wilkins in Walt Disney Concert Hall, that featured some Ellington concert works. The Phil followed up over the past weekend Jan. 20–23 with four concerts of all-Ellington programming, again conducted by Wilkins who did such a fine job in 2019.

First, let’s get one issue out of the way. There’s no way that a symphony orchestra, or even a modern-day big band, is going to sound exactly like the Duke Ellington band. It can’t be done (although the antiquarian Jazz at Lincoln Center Orchestra has come very close), for Duke wrote his music for the unique timbres, inflections, and personalities of his band’s collection of brilliant oddballs and characters. Go dig out the recordings if you’re looking for that; there are hundreds to choose from.

Moreover, Ellington never learned to write for a symphony orchestra; he always palmed off the task of arranging for the orchestra to an outsider. So, along with adding strings, winds, and horns alongside the ranks of a big band, you have the additional filter of the arranger coming between the listener and the Ellington sound.

Be that as it may, Wilkins knew how to handle the balance of dealing with the thick harmonic weight of big band harmonies blown up to symphonic size, and managing to lift the mastodon off the ground with something resembling the loosey-goosey swing of an Ellingtonian rhythm section. Whenever the drums could summon that crackling Sam Woodyard-style backbeat, things jumped.

The mixture started to click Thursday night (Jan. 20) in Night Creature, a playful, little-known 1956 suite in a David Berger transcription in which the second movement creeps along like the title would suggest and the third movement has an Afro-Cuban clavé rhythm amid the string serenades and growls from the brass soloists. Ellington’s idealistic strife-free vision of a New World A-Comin’ (1943) is a flowery piano concerto containing several cadenzas in a Duke-meets-Rachmaninoff manner, with one happy-go-lucky tune intervening and a coda in Maurice Peress-arranged Technicolor. Jazz’s Gerald Clayton was the piano soloist, and he exploited the opportunities to flash some technique to the hilt.

My complaint about Peress’s suite from Black, Brown and Beige (1943) — the sole work that was played in all four concerts — is that it only includes music from the “Black” section (“Work Song,” “Come Sunday,” “Light”) and doesn’t reflect the astonishing scope of the whole structure. It was Ellington’s massive expansion of everything he had done up to that point in order to depict Black history and its people in all its diversity over the complete version’s 48-or-so minutes.

The Peress suite covers only about two-fifths of B, B and B’s timeframe, and omits a lot of great material like the wonderfully swinging “West Indian Dance” or collaborator Billy Strayhorn’s suave portrait of upper-crust Black life in “Sugar Hill Penthouse.” What was left in this continuously played suite was a pair of grand-sounding bookends, thick block textures, lush strings, the inevitable echoes of Johnny Hodges in the alto sax solo during “Come Sunday,” and just enough pop in the swing rhythms.

Likewise, the four excerpts from the late-period ballet The River (1970) do not adequately represent that work, for Ellington produces fascinating modernist dissonant effects to depict his imaginary river’s journey to the sea in some of the missing sections. The 17 minutes of Ron Collier symphonic arrangements for Alvin Ailey and the American Ballet Theatre played here were sometimes pastoral in mood with a few exotic instrumental touches, markedly different in timbre from the other works on Jan. 20’s program. Even in his last years with Strayhorn gone, Ellington was absorbing new musical languages and colors.

Come Sunday Jan. 23, as it were, the bulk of the program was turned over to a generous selection of excerpts from Ellington’s three Sacred Concerts. For all of his extensive secular pursuits, Ellington was a deeply religious man — so much so that he is quoted as saying he was afraid to be in the same house with people whom he knew to be nonbelievers. He considered the Sacred Concerts to be the most important things he had ever done — and I believe it, for he poured some of his most emotional music into parts of them. The Los Angeles Master Chorale’s presentation of excerpts in 2004 was the most moving concert I have heard in the Grant Gershon era, and not surprisingly, the Sacred Concerts sequence turned out to be the highlight of the LA Phil’s Ellington celebration.

The First Sacred Concert — a thrown-together yet surprisingly effective patchwork stocked with some fresh material augmented by parts raided from Black, Brown and Beige, the Emancipation Proclamation centenary musical My People, and New World A-Comin’ for solo piano — was represented by three selections. Then came two selections from the Second Concert, which consisted of then-all-new material, and finally three from the Third Concert, long regarded as the weak link in the trilogy, although the excerpts heard Sunday held their own with the others.

Among the gems to be found, two stood out. “David Danced Before the Lord With All His Might” from the First Concert, recycled from My People, is actually “Come Sunday” all spiffed up as a concerto for tap dancer, staccato chorus, and orchestra. Nevertheless, it was one of Ellington’s most striking brainstorms and dancer Chloé Arnold produced an eclectic smorgasbord of rhythms with her tap shoes. “Something ‘Bout Believing” from the Second Concert is an upbeat, emotional, showbizzy statement of belief where I chose to ignore Duke’s hokey, at times downright intolerant lyrics and bask in marvelous Ellingtonian harmonies and the swinging beat.

Twelve vocalists from a bewildering variety of musical and theatrical idioms covered the choral and solo parts. Sy Smith, Aretha Scruggs, and Ashley Támar had the unenviable task of coping with the treacherous vocal lines that Ellington wrote for Alice Babs, the incomparable Swedish soprano with a pitch-perfect feeling for jazz. They mostly passed the test, even way up high. The uncredited arrangements for symphony orchestra enhanced the original music to a greater degree than in the other Ellington suites, the strings wrapping a warm velour robe around the rhythm section without diluting its swinging pulse much.

Alas, attendance was scanty at the two concerts that I attended; no doubt people were still frightened away by omicron fears. But really, Disney Hall is one of the safest gathering places you can find in town with its new booster requirement for entry, which went into effect Jan. 18. And the ushers were on the alert, looking hard for people not wearing their masks correctly.

The revered Hollywood Bowl conductor talks about bringing the jazz legend’s symphonic works into the canon, and reveals the challenges of “COVID conducting.”

Robert Glasper Reimagines Duke Ellington From the Jazz Side

Glasper’s imagination takes off in the wildly eclectic second set, replete with the String Candy Orchestra, a DJ, and electronic voice-overs.

About Time to Hear Some Duke Ellington 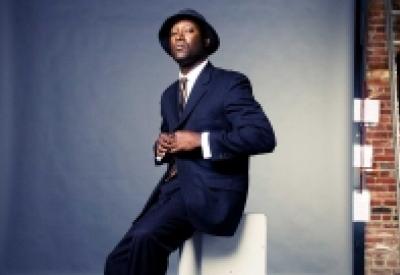