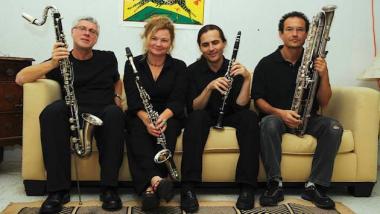 No composer created more conspicuously alluring settings for clarinets than Duke Ellington, and Beth Custer’s Clarinet Thing spent much of Sunday afternoon, Jan. 19, exploring those striking sonorities. The quartet, which kicked off the 2020 Third Sunday series at St. Alban’s Episcopal Church in Albany, features a nonpareil foursome, including noted Brazilophile Harvey Wainapel, the supremely versatile Sheldon Brown, and the inveterately inventive Ben Goldberg. Custer, a prolific composer who’s distinguished herself writing for silent film, dance theater, and television, is the ringleader. A master clarinetist herself, she’s kept the band performing over the past three decades, though in recent years Clarinet Thing sightings have been few and far between. With the St. Alban’s parish hall providing an ideal acoustic environment, the quartet performed seated and unamplified surrounded by more than a dozen instruments, offering a transporting reminder of the band’s utterly singular sound.

Between them, the quartet covers just about the entire clarinet clan, from the piping, unruly E-flat clarinet to the brusque contrabass clarinet, with a subterranean register that sounds like an electronically generated tone (that rarely seen horn, played by Custer, belonged to the late, beloved Ralph Carney, a founding Clarinet Thing member). Opening with the luxuriant polyphony of Ellington’s “Azure,” a gossamer tone poem that edges toward atonality, the band blended and phrased together with such fine-grained control it was impossible to differentiate the horns in ensemble passages. The arrangement of “In A Sentimental Mood” slowed the tune’s usual tempo down a few beats, the better to enjoy the vulnerable ascending line.

After two pieces from the mid-1930s, Brown introduced his arrangement of 1927’s “Jubilee Stomp” by noting that he wanted to make sure some early Ellington was part of the program. With Goldberg’s popping contra-alto clarinet providing propulsive fuel, the interlocking grooves conjured a bustling dance floor. Billy Strayhorn’s ravishing ballad “Lotus Blossom,” another essential piece of Ellingtonia, offered another case study in Clarinet Thing as an arranger’s palette, as the quartet gradually layered harmonies on the lapidary, achingly beautiful melody.

The band’s originals were just as effective. Goldberg turned Clarinet Thing into a gospel quartet on one piece, while Custer’s “Geodesic Dome” took the quartet in a playful new direction, keying on the thick textures of doubled bass clarinets. Part of what makes the band so consistently compelling is the contrasts between the fluid tone of the B♭ clarinets (what’s usually known simply as a clarinet), the woody bass clarinets, and the thick, often percussive sound of Goldberg’s contra-alto.

The concert’s second half came back to Ellington with an arrangement of 1928’s “Creole Love Call” inspired by Rahsaan Roland Kirk’s interpretation on his classic album, The Inflated Tear. Featuring Brown, the sultry blues took on a swelling, self-possessed elegance that seemed to fill the social hall and spill down the stairs. Similarly reimagined, the arrangement of “Black and Tan Fantasy” foregrounded Ellington’s quotations from Chopin’s “Funeral March” from his Piano Sonata No. 2, exacerbating both the tune’s audacity and torrid eroticism. More than a decade since the release of the quartet’s second album, Cry, Want (BC Records), the performance made it abundantly clear that Clarinet Thing deserves another round.

Selections from Lutosławski to Mozart provide a reverse history of the instrument.

The vaunted Israeli clarinetist brings the best of Brazilian jazz to Stanford.