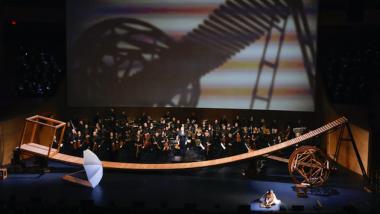 Not all of a great composer’s later works are equally revivable, though we tend to think that the fully mature composer cannot err or be off his game. But the Los Angeles Philharmonic’s decision to present a full-scale production of Shakespeare’s The Tempest on the limited stage of the Walt Disney Concert Hall featuring Jean Sibelius’s incidental music conducted by the Finnish composer’s countrywoman, Susanna Mälkki, proved a waste of talent, time and funding. The hall was only three-quarters full when Thursday’s performance began. It was less than half full after intermission.

Actually, calling it a full production of Shakespeare’s play is generous. According to director, Barry Edelstein (of San Diego’s Old Globe Theatre), the project took more than a year-and-a-half to create, during which he and Mälkki worked closely to reshape the material. The result was a 100-minute “hybrid” (Edelstein’s word), a jigsaw puzzle requiring substantial cuts to the play and various rearrangements and cuts of Sibelius’s score.

There were times, Edelstein explained, when he and Mälkki felt the music just didn’t work dramatically with its corresponding scene. So, they went through the score and picked music they felt worked better and made the switch. Then, as a contemporary interjection, Edelstein chose to slip in excerpts taken from Auden’s lengthy poetic analysis of play, The Sea and the Mirror. With all these extras, the play was reduced to its bare bones, with just enough time to tell the main story.

The performance called for a cast of 12 actors to perform the play; 10 dancers, “The Shapes,” to provide added movement and fly Ariel about the stage; a full complement of Los Angeles Philharmonic musicians (crammed to the back of the stage); five vocal soloists, and the Los Angeles Master Chorale seated on the sides  — 150 people in all, according to Edelstein’s count

The incidental music for The Tempest was one of Sibelius’s last completed projects. It was a commission from the Royal Theatre in Copenhagen, which was planning a mega-production of the play in 1926 for full orchestra and chorus, operatic singers, actors and a ballet. Although he accepted the commission, Sibelius kept putting it off until he either ran out of excuses or the Royal Theatre made him an offer he couldn’t refuse.

Ultimately, he composed 45 accompanying segments, including a ballet, some as brief as a minute or two. The entire score consists of one hour and 15 minutes of music. Some of Sibelius’s creations are exciting, atmospheric, and engaging. “The Storm” that begins the play is dark and ominous, a musical middle ground between Wagner’s overture to The Flying Dutchman and Britten’s seascapes from Peter Grimes.

The most beautiful music comes from the combination of a lilting flute (played by Cathy Karoly), plucked harp (Maria Casle) and vibrant strings that Sibelius created to represent the sprightly, lighter than air quality of Ariel. In contrast, to depict the “monster” Caliban Sibelius made his ponderous footfalls appear in the lower strings. The ballet music is superficially pleasing but hardly memorable. Of the various songs (which are sung in Danish) the most impressive is the lament, “Full fathom five, my father lies” which was sung by mezzo-soprano Elisabeth DeShong.

Much of music, however, is innocuous, like film-music underscoring. There are bucolic effects to enhance love scenes, bouncy music for comic moments, all mixed in with an abundance of Finnish folk-flavored melodies and songs.

The music, no matter how well it was conducted by Mälkki, could only make half the evening bearable. The actors performing Shakespeare’s drama, unfortunately, were a hodge-podge of ability, from top-flight to almost amateurish. It was a hit-and-miss enterprise.

There were three standout performances: Audrey Corsa made a wonderfully naïve, though very contemporary, Miranda. Beth Malone (fresh from her New York performances as the Angel in Angels in America) was totally charming, a sprite with attitude as Ariel. Michael Genet played Alonso, the aged King of Naples, with regal poise.

With all the fine actors in Southern California who might have been available to play Prospero, why would you cast Lior Ashkenazi? He may be a highly respected Israeli actor, but his accent is so thick that every fifth word he spoke was unintelligible. In addition to being incapable of speaking his lines “trippingly on the tongue,” Ashkenazi’s performance never came close to capturing the complex combination of magical wizardry, revenge-seeking hatred, fatherly love, despotic imperialism, and, ultimately, majestic forgiveness that is Prospero.

In the large cast, Grantham Coleman as the love-struck cast away Ferdinand came across as simplistically ardent. Kevin Cahoon was a mincing, squeaky-voiced, sitcom version of Trinculo. Tom McGowan was a dullard of a Caliban.

Even at 100 minutes, this Tempest was tiresome and becalmed.

A stellar return from Finnish guest conductor Susanna Mälkki, an admirable performance by Jeremy Denk, and a climactic 30 seconds of ecstasy in a seven-minute “aperitif” not heard here since the Loma Prieta earthquake.

Orchestra and conductor were in top form, but Latvian violinist Baiba Skride stole the show.