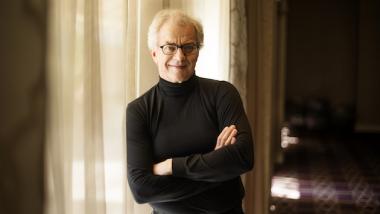 Third in a row of foreign guest conductors presenting repertoire from their nations of birth with the San Francisco Symphony, Finnish maestro Osmo Vänskä, music director of the Minnesota Orchestra since 2003, again showed his worth.

Even for a tone poem, Finlandia is an odd hybrid of a piece, more rhapsodic than symphonic, full of sudden transitions and mood changes. Martial outbursts and stirring melodies lead up to an inspiring hymn, which, since its inception (in 1899–1900), has become popular enough to serve as an unofficial national anthem for Finland. In an interview in the S.F. Symphony’s program notes for this concert, Vänskä intimated that he always has tears in his eyes when conducting the piece.

In spite of that, Vänskä presented a Finlandia that was rather detached, but in a positive sense. With a conducting style that I would call effective and angular rather than graceful, the Finnish maestro let the drama inherent in the score of Sibelius’s monstrosity speak for itself.

Over the years, I have developed a healthy dislike for Finlandia, and Saturday’s performance did little to change that. In that respect, I am in the good company of the composer himself, who reportedly came to resent the piece because its popularity took attention away from his other, more significant compositions.

One such composition is the Violin Concerto in D-Minor, Op. 47, Sibelius’s only solo concerto, eloquently played last weekend by Latvian violinist Baiba Skride.

Skride produces a marvelous tone that ranged from ethereal and fragile at the opening of the concerto, to more meaty and powerful as the technically demanding concerto progressed. Dressed in a lavish gown, Skride had an interesting story to tell, and she did so in a convincing way.

Especially in the second movement, Adagio di molto, Skride created moments of incredible and indescribable beauty and intensity. There was a clearly audible, collective release of breath on the part of the audience after the movement ended and the last note had faded.

Hearing Shostakovich’s First Symphony makes you wonder how anyone can create something like it at age 19. This is the mature Shostakovich in a youthful nutshell. All the elements that characterize the rest of his 15 symphonies are already present and well established in this first one, written in 1924–25 as his graduation piece for the conservatory in what is now Saint Petersburg.

Vänskä and the members of the San Francisco Symphony excelled in their exploration of the colorful tonal richness of the piece and the way in which Shostakovich manages to write music that works on both a microscopic and an astronomic scale.

The Scherzo of the second movement was manic and mischievous; the third movement (Lento) oppressive and harrowing; but slowly the mood lifted, the clouds parted, and Vänskä swept the orchestra into the incredible finale.

Osmo Vänskä Looks Beyond the Expected

The Finnish conductor joins the S.F. Symphony for a program of Sibelius and Shostakovich

New Grammy-winner Osmo Vänskä, no longer with the Minnesota Orchestra, prepares a varied Finnish/Russian concert with the S.F. Symphony.