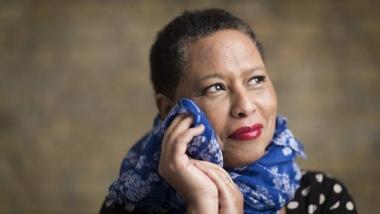 The Left Coast Chamber Ensemble offered pairings of modern compositions and the earlier works that served as their inspiration on a virtual concert titled “Please Elaborate.” The concert began and concluded with instrumental music by the 20th-century master Benjamin Britten, as well as songs that inspired him by the Renaissance composer John Dowland. The heart of the program featured two works by Jamaican-British composer Eleanor Alberga which were in turn inspired by Johann Sebastian Bach’s Chaconne and the Lullaby of Johannes Brahms. The concert was filmed on Nov. 8 at the beautiful private garden of Marilyn Schuster and Susan Van Dyne and at the Center for New Music in San Francisco.

John Dowland is one of the most accomplished composers of the Elizabethan era and his song “Come Heavy Sleep,” which opened the program, is as suffused with melancholy and as obsessed with sleep and death as a Shakespearean soliloquy. Eschewing the rigid structures of Renaissance motet and madrigal, Dowland, in his Booke of Songes or Ayres for voices and lute, was fascinated by the opportunity for flexible expression offered by the early Baroque approach to musical rhetoric. He consistently used the interval of a descending fourth to emphasize depression, lengthened note values to depict longing for release, and unusual modulations to heighten changes of mood. Soprano Nikki Einfeld sang with exquisite sensitivity to Dowland’s musical setting and text.

Benjamin Britten quotes that text on the opening page of his Nocturnal after John Dowland. Sharing Dowland’s melancholic obsessions with dream, sleep, and death as conduits for cathartic release, Britten depicts different emotional states of the dream world in a series of variations. The burden of Dowland’s song, that sleep is a blessed relief from the worries of the waking day, is dramatized by a series of mostly disturbing variations, each depicting a different mental state. Dowland’s theme does not appear in its original form until the very end of the piece, where it synthesizes the fragments heard in the dream variations into a sublimely peaceful whole. Guitarist Michael Goldberg skillfully captured the mood of each variation

Britten is justifiably best-known for his operas, but musicologists from Peter Evans to Benjamin Dwyer have maintained that Nocturnal deserves a far higher place in the view of Britten’s achievement than it has yet gained. Goldberg made the case with his performance.

Eleanor Alberga is a leading British composer whose Oh Chaconne! was originally composed to precede a performance of the Bach-Busoni Chaconne, and I wish it had been done that way in this performance. A compelling composition — passionately and intelligently performed by pianist Eric Zivian — it begins with fragments of the Bach which are gradually reassembled, first building to a climax and then returning to tranquility.

Alberga’s No-Man’s-Land Lullaby was inspired by a visit to landscapes that were, during the wars of the twentieth century, also the sites of men dying slowly and uncomforted in a place called No-Man’s-Land. Haunted during her visit by the melody of Brahms’s Lullaby, Alberga composed her threnody with Brahms in mind. Violinist Phyllis Kamrin and pianist Eric Zivian brought both pathos and passion to the performance of both works.

The conclusion of the evening, mirroring the opening, returned to the music of John Dowland and Benjamin Britten. Dowland’s songs “If my complaints could passions move,” and “Flow My Tears,” were the inspiration for Britten’s Lachrymae for viola and piano. As in Nocturnal, Britten’s uses his modern language to investigate Dowland’s obsession with dark moods..

Britten’s variations concentrate on the original opening eight-bar theme of “If my complaints, with an unexpected interpolation, halfway through, of “Flow My Tears.” After these reach their climax, Britten replaces the original theme with the conclusion of Dowland’s song — very beautiful music we had not heard until this point — revealing a transcendent peace for which we did not even know we had been longing. Soprano Nikki Einfeld and guitarist Michael Goldberg performed Dowland’s exquisite song with emotional directness and grace. Violist Phyllis Kamrin and pianist Eric Zivian captured every nuance of Britten’s subtle and evocative score.