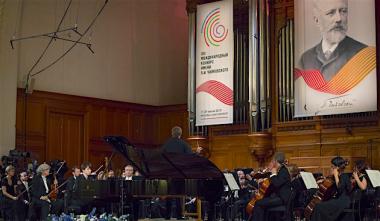 The quadrennial Tchaikovsky International Music Competition ended in Moscow and Saint Petersburg, Russia last week. For 2019, wind instruments were added for the very first time, making it one of the most comprehensive music competitions in the world. Not atypical for this competition, there were a few surprises and controversies, but in the end, winners were chosen for each of the instrument categories. I attended the finals competition, held over three days at the Moscow Tchaikovsky Conservatory.

The finals are a grueling ordeal: Each competitor plays a Tchaikovsky concerto and one other, back to back. Six chose to play Tchaikovsky’s first piano concerto and another Russian concerto, while one chose to play the rarely heard Concerto No. 2, paired with Brahms’s No. 2. It was a risky choice, but it set him apart from the rest of the large field.

The first day began with a confident performance by Konstantin Yemelyanov, who played the thrilling Prokofiev Concerto No. 3 almost as a warm up to the titanic Tchaikovsky First. Rather than dominating the orchestra at all times, he would often pull back, coyly drawing the audience to the stage. A local favourite, Dmitry Shishkin, followed, and while his calculated style left some audience members cold, it was full of intricate details, revealing that he is a thinking pianist. Though he played the identical program as Yemelyanov except in the reverse order, Shishkin threw colourful punches and laughter in his Prokofiev performance, and made lyrical lines soar in his Tchaikovsky.

Then the biggest surprise of the competition occurred. An Tianxu was anticipating to play the Tchaikovsky No.1, but the orchestra reversed the order and began with Rachmaninoff’s Rhapsody on a Theme by Paganini. An quickly responded, but arrived at the first note a beat too late. He was able to collect himself during the orchestra’s introduction, but it was a surreal moment. Nevertheless, he navigated the variations cleanly. Fatigue or distractions seemed to seep into his Tchaikovsky, and he rushed through the last movement.

An, apparently, made a request for changing the order of the program, which was approved by the judge. The change was not communicated to the orchestra, however. Compounding the problem, the announcer gave the old order then corrected himself and announced Rachmaninoff in Russian only, so An was unaware of the mistake. He declined the offer of a second chance the next day.

The second day began with a sincere and poetic reading of the Tchaikovsky No. 1 by Alexey Melnikov. The real substance was in the Rachmaninoff No. 3, where the music seemed to gasp for air, drowning in the depth of depression. The triumphant last movement was still carefully measured, though with confidence and a sense of healing.

Alexandre Kantorow had been seen as a “different” pianist. From being the only pianist to play a Kawai in the earlier stages, he brought two concertos that no one else was playing. It should not be a surprise that he, too, is a student of the highly esteemed Rena Shereshevskaya, who also taught Lucas Debargue, the fourth prize winner in the previous competition, and distinguished himself with his unique approach.

Kantorow began a convincing interpretation of the seldom heard Tchaikovsky No. 2 with a heightened sense of ensemble. Here, Kantorow was at times a soloist, and blended with the orchestra at others. Particularly in the second movement, Kantorow exhibited his keen sense of collaboration, accompanying a violinist and cellist. Brahms’s second concerto also showcased Kantorow’s sensitivity, quite distinguished from the testosterone-laden performances by other competitors. Kantorow possessed an exquisite sense of a concerto in concert with the orchestra.

The last night began with Maō Fujita, who had garnered the locals’ adoration in the earlier stages. Nicknamed Pokémon from the moon, Fujita charmed the audience with clear articulation and outlines even in the thundering opening chords of the Tchaikovsky. The sparkling clarity was even more evident in his Rachmaninoff No.3, where his sparing use of the sustain pedal revealed inner details rarely heard in torrents of notes.

American Kenneth Broberg performed the same program as An, but delivered a lush performance, with a general use of the sustain pedal to fill the hall with resonance. He projected an expansive sonority that contrasted with Fujita’s, particularly with some added octaves for extra weight.

In the end, it didn’t seem to surprise the Moscow audience that Kantorow was declared the first prize winner. It was the first time a non-Russian pianist had won the piano division since Ayako Uehara in 2002. Then he was declared the overall Grand Prix winner in the gala concert in Saint Petersburg the next night. His unique repertoire combination and approach to music may have been risky, but in the end, he was rewarded handsomely. It was particularly impressive given that it was the first time he had entered a major international competition.

The young pianist gave an audience of enthusiasts a generous introduction to his Cliburn-medaling form.

Author/pianist Stuart Isacoff recounts the dramatic story of Van Cliburn’s Tchaikovsky Competition victory at the height of the Cold War.

The Cliburn competition anointed its first winner from South Korea.