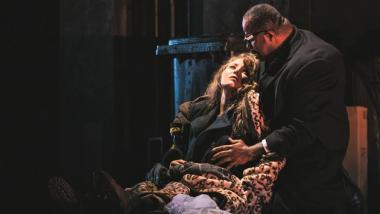 Seattle Opera has come a long way since its seasons were dominated by Ring cycles in which Valkyries waved their spears from high-flying carousel horses. Ever since General Director Speight Jenkins was succeeded by Aidan Lang (who has recently passed the torch to former SFO Artistic Administrator Christina Scheppelmann), the company has made a concerted effort to bring opera into the present by examining the stereotypes that are endemic to many of the most beloved works in the canon.

With a “bad boy” Duke of Mantua (debuting Armenian tenor Liparit Avetisyan) inspired by Silvio Berlusconi, the former Italian prime minister whose tenure was marked by what Hume describes as sexual scandal, political incorrectness, immaculate tailoring, and cosmetically enhanced smiles, her production centers on a court that reeks of toxic masculine arrogance.

Hume’s Rigoletto, in which the interior of the Duke’s palace (designed by Richard Roberts and effectively lit by Jason Morphett) looms over many of the opera’s scenes, proved an ideal fit for the musical drama. Hers is an extremely attractive, unified, and unforced update that makes the opera more real and emotionally impactful than any production of Rigoletto I’ve witnessed.

Frequent Seattle Opera conductor Carlo Montanaro brought a flexibility of tempo to opening night that harkened back to the golden age at the start of the recording era. He allowed Avetisyan to bend and extend phrases, and to linger on important notes that included a thrillingly interpolated, extended B natural at the end of “La donna è mobile.” Even the pacing of the beloved quartet, “Bella figlia dell’amore,” bore more similarities to the old Caruso recordings than to some of the strict metronomic readings of the late 20th century. As much as Montanaro and his cast honored the letter of Verdi’s score, they also acknowledged that great theater requires expressive freedom.

Avetisyan’s acting was exceptional, with body language that projected “arrogant bastard” far beyond the footlights. Vocally, he went from strength to strength; his “Parmi veder le lagrime” (“I can almost see her tears”) was as beautiful as his “La donna è mobile” was thrillingly repulsive. For a short while, you could almost believe that there was a tender heart beneath the Duke’s despicable public persona.

If “Caro nome,” Rigoletto’s great soprano showcase for Rigoletto’s naïve daughter Gilda (Idaho-born Madison Leonard), didn’t contain the last iota of flexibility, that was due to Montanaro’s careful attention to the soprano’s strengths. Leonard has an absolutely pleasing, sweet, and youthful voice, as well as a high extension that grows stronger as it enters the “money note” territory that includes a strong if not completely effortless high E-flat. She may not at this juncture possess absolute mastery of subtle shading or bell-like coloratura — she emits a bit of breath as she hits high staccato notes, and her trill is not well-projected. But Leonard is so lovely to listen to, and so physically perfect for the part, that her artistry was a major asset.

The greatest singing actor of the production was opening night’s Rigoletto, dramatic baritone Lester Lynch. Gifted with a large, multi-hued voice whose warm core inspires empathy and compassion, Lynch made of Rigoletto a complex, multi-dimensional human being whose repellent swings between acrid jest, self-condemnation, and victim/persecutor were tempered by a father’s deep love for his daughter. His instrument does not fully have the dark, spiteful bitterness possessed by some notable Rigolettos, but his vocal beauty and emotional honesty made for a deeply touching, vulnerable portrayal. Lynch’s gift for bringing out the tender, wounded heart that motivates Rigoletto left me mesmerized.

Glass’s In the Penal Colony and Mozart’s La finta giardiniera comment on the human condition from different perspectives.