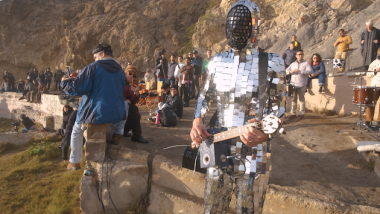 Imagine, if you will, the sound of an electro-acoustic cello, reeled in from a saltwater pool and jolted to cranium-splitting life by two musicians in futurist regalia. See it: the bleak fogscape, the sublime coast — the air, mud, brine, and algae slowly swallowing an edifice of charred concrete. Here, by the cliffs and gulls: what are you feeling? “Do you know where you are?”

“Tremble Staves,” writes Chacon — an award-winning Navajo composer and recent winner of the Berlin Prize — turns to “moving and stationary bodies of water” to model the “relationships that animals (people included) might have with each other, or with the land, with collisions in nature, or with something else that we can’t comprehend, even at our most spiritual and vulnerable.” By linking “narratives of the San Francisco Bay Area’s complicated relationship with water” with “overlapping Navajo creation stories,” Tremble Staves draws new attention to the crumbling structures grafted onto the shore. (The Sutro Baths, dreamed up in the late-nineteenth century by Adolph Sutro, once housed the world’s largest indoor swimming complex. The Baths burned down in 1966, leaving skeletal structures awash in the waters they were built to control.)

For Tremble Staves, monitors and percussion rigs followed the site’s curves and tiers; the audience faced the roaring ocean and a central “stage” area. To the left was a placid, moss-lined pool. And on the stage sat Andrews and Meyerson’s prepared guitar and electro-acoustic percussion kits. Andrews wore a prismatic suit made of mirror tiles (think disco ball meets chainmail), and his face was a discomfiting void. Meyerson wore a brown, blue, and green one-piece adorned with earthy designs and robust black plumage along the chest, arms, and shoulders. Smiley wore a patterned, hooded shawl with a cyclops visor and a wooden staff.

Once underway, the piece’s aural textures oscillated between the stuff of ambient lullaby, impending doom, and pre-industrial ecosystems. Distortion and feedback became, as with some of Chacon’s earlier work, purifying aesthetic tools; glitchy, bitcrushed scrunches of wood, water, metal, and membrane joined microtonal dissonances in exploration of decolonial possibility. Andrews and Meyerson occasionally pushed their amps to their peaks, flooding the ruins with white noise and industrial clatter. (Think an overdriven power drill against a pane of brittle glass.)

During the third movement, “Delta,” Andrews live-taught and conducted a quartet of electric guitarists — Theo Moss, Izzy Spanswick, Nathan Marks, and Marcus D’Avignon — controlling their individual volume levels, reverb lengths, and effects pedals while seated at a blinking console. The quartet, meanwhile, explored different techniques on cue, reacting to one another’s gestures: pick slides, string bends, tremolos, finger taps, string and pinch harmonics, and slide glissandi. Amid it all, the ocean churned beneath a slate sky, contributing to a mounting bleakness: ruins and noise, stagnant pools and stinging memories.

While at times oddly paced, the musical composition succeeded in that it drew new attention to the performance site itself. Chacon’s use of abrasive textures and post-tonal material — and Andrews and Meyerson’s fully memorized, virtuosic delivery of incredibly difficult passages — left the audience with an appreciation for what sound can reveal.

The fifth and final movements, “Distributary” and “Sound,” made this especially clear. During “Distributary,” 13 percussionists began a series of increasingly complex calls and responses around the Sutro Baths perimeter, coordinating their rhythms while upward of 50 feet apart. Bass drums, floor toms, large cymbals and gongs, thunder sheets, rototoms, metal bowls, triangles, kitchen tiles, and whistles abounded. And Smiley, as if in league with the cosmos, delivered world-shifting language: “[this was] a dream now exposed to the sun.” As if on cue: the clouds cleared, the breeze lightened, and the sun bathed all in cinematic gold.

“Blessed be these ruins,” Smiley continued. “All belongs to water; water belongs to all.” Andrews and Meyerson, by then equipped with mobile instruments, cleansed the audience with a whinnying guitar and a clanging metal tank before climbing the site’s large hill in exit. And while everyone near me craned their necks to follow their sound and watch them recede, I couldn’t help but feel, seated there amid the beach flies, that we were meant to look instead at what lay before us — at that active, life-bearing ocean and that sinking palace of sand.

Are We Done With Genre Yet? How Young Musicians Are (Again) Dissolving Boundaries

Du Yun, The Living Earth Show, and Cleveland Uncommon Sound Project are only a few of the musicians who say that they’re actively subverting categories.