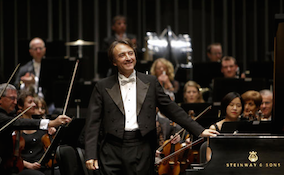 The London Philharmonic Orchestra is one of the world’s most versatile orchestras, and it is quite likely also one of the orchestras that is most heard around the world.

Not only because of concerts at its home base, London’s Royal Festival Hall, its summer residency at the Glyndebourne Opera Festival, its national and international concert tours, and numerous performances for radio and television. But also, and perhaps mostly because of its regular work for the UK and Hollywood film industries, recording soundtracks such as the Oscar-winning score for the Lord of the Rings trilogy.

Halfway through its 10-day North-American tour, continuing to New York, Toronto, and Chicago later this week, the London Philharmonic (LPO) was in town for two concerts as part of the San Francisco Symphony’s Great Performers Series. Vladimir Jurowski, LPO’s Principal Conductor since 2007, led the orchestra in two programs that were very different in character, but equally well received by an appreciative San Francisco audience.

An orchestra that goes on tour will typically travel with a program that shows off its best musical assets, but in the case of the LPO it is hard to determine what those are — except maybe everything. And as can be expected from a world-class orchestra, the LPO also brought a world-class soloist along: French pianist Jean-Efflam Bavouzet.

The London Philharmonic is steeped in the performance traditions of every kind of music that was ever written for symphony orchestra — and the flexibility with which it assumes a different musical identity with every program piece is astonishing.

LPO’s Sunday performance showed the orchestra’s more traditional side in a program with a distinctly 19th century feel: Prokofiev’s third piano concerto from 1921 as the ‘youngest’ piece, plus Tchaikovsky’s voluptuous Pathétique from 1893, and a symphonic poem by Antonín Dvořák, The Noonday Witch from 1896, as concert opener.

The LPO’s distinctly Old World sound was an ideal conduit for Dvořák's musical imagery, especially through the orchestra’s magnificent soloists in the wind section.

Based on a Slavic folktale, this cinematic piece of music has a dramatic storyline that is colorfully illustrated in the score. The LPO’s distinctly Old World sound was an ideal conduit for Dvořák's musical imagery, especially through the orchestra’s magnificent soloists in the wind section.

The Monday concert felt more contemporary, and started off gritty and enervating with Chorale by contemporary Finnish composer Magnus Lindberg (b. 1958), before it became really gnarly in Shostakovich’s Eighth symphony (1943).

Lindberg wrote Chorale in 2002 and based it on the chorale "Es ist Genug" (It is enough) by J.S. Bach. In Lindberg’s treatment however, Bach’s melody is transformed, obscured, or otherwise in disguise, floating just above or right under the largely dissonant surface of the music. As a composition, Chorale is most like an exercise in musical texture and shifting aural patterns. It ends in a series of dense tone clusters, heavy with low strings and brass, that dissolve in an ethereal major chord.

Vladimir Jurowski leads his orchestra with economic precision and without any expression of drama in his bearing. Even when the music’s volume or temperament would justify grander gestures, his arms hardly ever reach outside of his podium. He barely ever changes position, but somehow his hands are everywhere, keeping time, sculpting one of Shostakovich’s haunting melodies, or signaling a section or soloist.

Jurowski’s restrained conducting style forms a stark contrast with Jean-Efflam Bavouzet’s dynamic piano playing. He jumps up and down on his piano stool, gets half to his feet at the end of a powerful phrase and doesn’t shy away from a bit of showmanship.

Interestingly, this manifested itself more in his interpretation of Rachmaninov’s Rhapsody on a Theme of Paganini on Monday, than in Prokofiev’s third concerto the night before. Bavouzet gave the Rachmaninov a real and substantial edge, but allowed Prokofiev’s concerto and its already grotesque and overstated contrasts to speak for itself. Occasionally Bavouzet’s temperament got the better of him, but what he lost in articulation, he more than made up for in expression.

What really sold me were Bavouzet’s virtuoso encores: Massenet’s Toccata in B-flat Major after the Prokofiev concerto on Sunday, and a truly riveting Feux d'artifice from Debussy’s Preludes, Book 2, No.12 on Monday: simply spectacular.

Hard to believe it was the same orchestra.