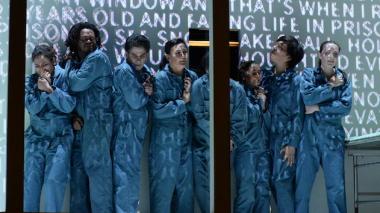 Long Beach Opera Gets Political With In the Penal Colony

Long Beach Opera (LBO) has devoted a great deal of attention to the operas of Philip Glass. It was the first company in Los Angeles to perform Akhnaten; Glass’s adaptation of Edgar Allan Poe’s The Fall of the House of Usher; and his setting of poems by Allen Ginsberg, Hydrogen Jukebox. Most significantly, it was the first company in the U.S. to stage Glass’s caustic bio-opera about Walt Disney, The Perfect American, a short freeway ride away from the Magic Kingdom.

LBO is currently presenting a very unusual adaptation of Glass’s opera, which is based on Franz Kafka’s horrific 1914 short story In the Penal Colony, which premiered in 2000 in Seattle. It marks a first collaboration between LBO and the Cal Rep theater company of Cal State Long Beach. It is as much a piece of agitprop theater as an opera (you might call it an agitpropera). The production (which plays through May 5 at the university’s Studio Theater) is politicized beyond the implications of Kafka’s story. The opera’s libretto by Rudy Wurlitzer is interspersed with contemporary text drawn from interviews conducted by members of the CSULB Rising Scholars’ program for previously incarcerated students.

As described by Jeff Janisheski (Cal Rep’s artistic director and director of the production) this hybridized In the Penal Colony “mashes together Glass’s hypnotic opera with a devised theater piece.” And where Kafka dealt in metaphor, this production is decidedly current and strident in its messaging. “Prison labor (in America) is a modern form of slavery,” writes Janisheski in the program. “And prison culture perpetuates an endless cycle of racism and violence.”

Kafka, who wrote his short story on the eve of World War I, meant it as a nightmarish indictment of mad government embracing mad science. To see the story as an indictment of capital punishment, Kafka wrote, was to miss the bigger picture. It would be like saying George Orwell’s Animal Farm is a manifesto on poor animal husbandry.

Kafka sets his story on a nondescript, desolate island. Long Beach Opera’s contemporary design by Danila Korogodsky sets the action inside a sterile, glass box prison populated by baton-wielding guards who oversee a Greek chorus of eight inmates in blue prison garb. Throughout the opera they shout out statements about their mistreatment, their fears of confinement, and the dehumanizing effect of prison life. “I don’t have a name! I am a number!”

Following this opening diatribe, the opera begins with the arrival of a midlevel bureaucrat, known simply as The Visitor. Sung by tenor Doug Jones, he makes it clear that he has no real interest in the task he’s been given, to observe an execution and file a report.

He is met by “The Officer”— a “good soldier” and obedient servant of the system who is given an impressive interpretation by baritone Zeffin Quinn Hollis. With an abundance of pride, he introduces the Visitor to the penal colony’s unique tool of execution. It is a demonic devise that ever-so-slowly carves the prisoner’s crime into their flesh until, after many hours of horrible suffering, the prisoner realizes the nature of their crime and dies. In the short story, as well as in the opera, the machinations of how the infernal machine performs its deadly task is delivered in grisly, sadistic detail.

As a substitute for an actual machine, Janisheski choreographs the prisoners into a living mechanism. With the victim secured to the machine, the inmates’ fingers become the penetrating needles as projections (by Lily Bartenstein) show a series of gruesome schematics. LBO Artistic Director Andreas Mitisek conducts a string quartet and bass who are situated above the action.

Philip Glass’s capacity to produce operas is prodigious; we are now at 23 and counting. Some are landmark masterpieces that defined minimalism in the second half of 20th century. In the Penal Colony, however, is not one of Glass’s great creations. Its all-too familiar melodic and structural template, while providing an effective atmosphere, feels like a one-size-fits-all score that could be adapted to suit almost any operatic occasion. The vocal lines feel superimposed and do not come trippingly off the tongue. I assume that the cohesion of the string playing at Long Beach Opera’s production improved in subsequent performances.

It soon becomes clear that the penal colony and its monster machine are in a state of decline and its very existence is about to be reevaluated by the new regime. In the opera’s most effective aria, the Officer longs for the golden era of the colony when executions drew huge crowds anxious to watch the machine at work and witness the transformative suffering of the condemned. It was a time, he sings, when budgets were flush and he was a young man dedicated to his mentor, the Old Commandant, who designed the machine and ruled the island with an iron fist.

When the machine begins to break down, the Officer tries to bribe the Visitor to file a positive report. When that fails, he frees the final prisoner and commits suicide by means of the machine. Kafka, however, does not allow his story to end as a passion play. Instead, the machine goes mad itself and rips the Officer to shreds, which is pretty graphically presented in this production.

As the Visitor, Jones offers a well sung, if not dramatically nuanced interpretation. He is not prepared for the level of fetishistic adoration the Officer has for the infernal machine. He is repulsed by it. As the opera ends, he flees the island, glad to be rid of the whole affair.

The integration of the two distinctly different texts may provide a Scared Straight element to the production. But it blunts the clarity of Kafka’s intent. If there is a truly Kafkaesque equivalent to be drawn at this moment, it would be to depict the plight of immigrant children on the border who have been separated from their parents, placed in cages, held in indefinite detention by an all-powerful government, with little or no comprehension of the “crime” they have committed. That’s Kafka!

NOTE: All performances of Long Beach Opera’s In the Penal Colony are sold out.

A moving, masterful production of John Adams’ Death of Klinghoffer raises vital political and religious issues that refuse to die.