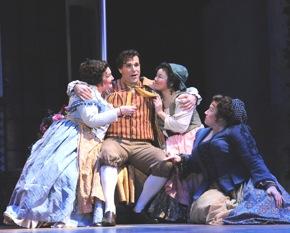 Long Day at the Barber's

The Barber of Seville is such a beguiling opera, it’s not hard to see why some mistake it for an easy one. But producers approaching Rossini’s bel canto masterpiece do so at their peril. Opera San José’s current revival is an instructive case in point: If its sole purpose was to expand the horizons of its young singers, then Saturday’s opening night performance at the California Theatre might be judged a success. By almost any other standard, a listener would have to conclude that the company’s reach had exceeded its grasp.

Opera San José has achieved sparkling results with Barber in past seasons, but the opera’s effervescent charms were in short supply in the production’s first of eight performances (repeats continue through Feb. 27). Directed by Jose Maria Condemi, conducted by Bryan Nies, and featuring the first of two alternating casts, opening night was a largely lackluster affair. There were intermittent bright spots in the two-hour, 50-minute performance, though, for the most part, the jokes fizzled and the voices never quite soared.

This company certainly isn’t the first to strike out with Barber, which is based on the Beaumarchais play that also inspired Mozart’s Marriage of Figaro (Barber is a kind of prequel, depicting the courtship of Count Almaviva and Rosina, who are married in Mozart’s opera). Rossini’s 1816 score requires singing actors possessed of precise vocal skills and keen buffa timing; the old adage that “drama is hard, but comedy is harder” may well have been coined with this work in mind.

Unfortunately, those sketches never became human. Condemi’s directing missed on two fronts: He didn’t invest the love match between Almaviva and Rosina with any discernable heat, and he didn’t make the comic business particularly funny. Left to their own devices, the singers turned in mostly one-dimensional performances.

Nies, who has conducted with insight in other assignments for this company, also seemed overmatched. The evening started well, with a taut, springy performance of the overture, and the conductor elicited shapely orchestral playing in several subsequent scenes (the Act 2 storm sounded aptly turbulent). Mostly, though, he struggled to maintain coordination between stage and pit. Whenever the singers faltered in Rossini’s ornate vocal passagework, the conductor either hesitated or sped up to keep the action moving; either way, he never achieved a cohesive flow.

Principals at Sixes and Sevenses

The cast was clearly committed, and in some scenes, vigor was enough. Mastery of the opera’s technical demands, though, remained elusive. Figaro is the principal cog in the comic wheel, but Krassen Karagiozov, who made his first appearance surrounded by four adoring women, often appeared one step behind. The baritone lacked the charisma and nimble wit of the matchmaking barber; his stage movements seemed random, and “Largo al factotum,” sung with harsh tone, was shorn of vocal appeal.

As Almaviva, Michael Dailey was the evening’s standout. The tenor boasts a smooth lyric instrument, albeit one that tends to lose pitch at the top; he started a little haltingly in “Ecco ridente,” but warmed to the performance, singing with admirable tenderness and earning laughs as a drunken Lindoro and the adenoidal pedant, Don Alonso.

Betany Coffland may yet make a fine Rosina; Saturday, the singer introduced an agile, well-projected mezzo voice and a vibrant stage presence. But her singing often sounded constrained, with unattractive, lemony top notes. “Una voce poco fa” lacked the requisite allure, and, as the evening wore on, the voice never full bloomed.

The comprimario roles were handled capably, yet without much distinction. Silas Elash offered a blunt approximation of Bartolo. Isaiah Musik-Ayala was a bland Basilio, Tori Grayum a dutiful Berta. Anders Froelich (Fiorello) and Stephen Howes (Ambrogio) rounded out the cast. The chorus sounded lusty but tended to mill about aimlessly, and failed to infuse Condemi’s Keystone Kops–style business with much zest. Barber takes place over a single day in Seville; here, it suggested the longest day of the year.