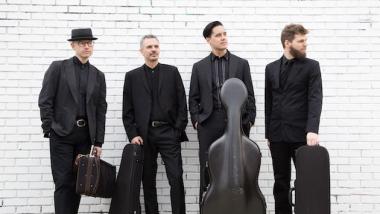 Looking for a Map With Brooklyn Rider

The string quartet Brooklyn Rider made its first appearance at San Francisco Performances on Friday, Nov. 16, presenting a concert of old and new music called “Healing Modes.” The big piece on the concert was Beethoven’s Quartet in A Minor, Op. 132, which was preceded by four short works, by Caroline Shaw, Gabriela Lena Frank, Reena Esmail, and Matana Roberts, all written in response to the Beethoven and to the theme of healing. All were commissioned for Brooklyn Rider and all were given their premieres earlier this year. The quartets by Roberts and Esmail were first performed earlier this month, on Nov. 2.

At the start of the program, violist Nicholas Cords spoke a bit about healing and music, complete with references to current events, and about the role of music as a healing art. I can’t say that I found this particularly persuasive, because he spoke in poetical generalities, without reference to, for example, music therapy. He also did not address the ways in which music and sound have been used as weapons; see, for example, Alex Ross’s 2016 New Yorker article, “The Sound of Hate.”

The program notes for each of the new works did describe how each work relates to the composer’s conception of healing. Caroline Shaw named her quartet Schisma based on a passage from the Book of Exodus in which God tells Moses how he will protect Moses when he passes by. She relates this to the third movement of Op. 132, to which Beethoven gave the title “Heiliger Dankgesang eines Genesenen an die Gottheit, in der lydischen Tonart” (Holy Song of Thanksgiving from a Convalescent to the Deity, in the Lydian Mode). Shaw further points to Greek islands that have become refugee camps for Syrians fleeing their civil war and seeking asylum.

Schisma has much of the textural variety and interplay among instruments that her Pulitzer Prize-winning choral piece Partita for 8 Voices has. She quotes a section of Op. 132 and runs variations on it — in pizzicato, in pairs of instruments, in harmonics, bowed, played in a minor key — with a most beautiful ending.

Frank’s Kanto Kechua #2 has a more personal association with healing, because it stems from music she wrote after a serious medical diagnosis but before successful treatment for her condition. Kanto Kechua #2 also incorporates motifs from Andean folk music. I found it pretty, but with many stops and starts, a series of fragments that never quite cohered. Perhaps this was the composer’s intention.

Before Roberts’s borderlands..., we heard from the quartet about how different the piece had been for them to learn and perform, because borderlands... has a graphical score and incorporates elements of chance; it will be different every time they perform it. Indeed, the players rolled dice and perhaps relied on other chance operations during the performance. They brought great concentration to this work, which I found brilliant and sometimes disturbing. It would have been good to hear a second time on this program, in hopes of observing how it can change from performance to performance.

Reena Esmail is a cross-cultural composer and performer, trained in both the Hindustani and Western classical music traditions. Zeher (Poison) blends these traditions, using the Western string quartet but with ornamentation, harmony, and string technique at least partially from Hindustani traditions. Drones, slides far different from typical string portamenti, and ornaments sometimes gave Zeher the flavor of Western medieval music; sometimes the harmonies followed the Hindustrani tradition to the extent of surprising audience members more familiar with Western harmony.

Brooklyn Rider’s repertory consists almost entirely of 20th century and new music, with a bit of Beethoven and the Debussy quartet thrown in. From this concert, it’s clear that their strength lies very much with the new and newer. While the “Heiliger Dankgesang” movement was lovely and the second movement tripped along nicely, the group’s balance of the quartet left a good deal to be desired. Their choice to use fairly minimal vibrato robbed the work of much warmth and lyricism. First violinist Johnny Gandelsman was unable to clearly articulate the rhythms of his part’s runs in the first movement. The group’s performance lacked the kind of rhythmic vigor and structural clarity that Beethoven’s music demands.

In the end, it was not aurally clear how all of these works related to healing, and except for the Shaw, their relationship to Op. 132 was also not particularly clear.

Brooklyn Rider string quartet plays just fine outside the mainstream, and even co-composes works for itself.

On the Edge With Kronos, JACK, and Brooklyn Rider

Keeping up with these quartets isn't easy, because, as new recordings show, they are always doing something new.

With its Brooklyn Festival, the Los Angeles Philharmonic celebrates a phenomenon in new music, which is (or will soon be) thriving in your neighborhood, too.