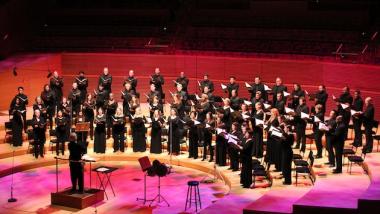 Songs of harmonious community and uplifting spirit gave way to the ominous foreboding of a Mass for the dead in the season-opening concert by the Los Angeles Master Chorale Saturday at the Walt Disney Concert Hall.

The concert, conducted by Grant Gershon, opened with a radiantly sung, expanded incarnation of Shawn Kirchner’s Songs of Ascent with texts drawn from Psalms 120–134. It was followed by the shadow-filled landscape of the Mozart Requiem.

“I like to create programs that sometimes present maximum contrast,” Gershon told the audience.

But the two works, despite their vast separation in time, intent, and source material, made a fascinating pairing — the former an exploration of mankind’s struggle to overcome the conflicts of war (specifically religious wars) and live together in harmony, balanced against the overwhelming dread of what may come after death, “the undiscovered country” where we (in Christian theology) shall all be judged for our actions.

Kirchner, who is an 18-year member of the Chorale (he joined as a singer the same year Gershon became music director) was awarded the post of Swan Family Composer-in-Residence. It was during his tenure that Songs of Ascent was given its premiere in 2015. Gershon describes it now as, “a more fully worked-out version.” For his part, Kirchner told the audience in no uncertain terms, “That’s it. I’m done!”

Conceived as a song cycle for chorus and four soloists, the work is based on the 15 Biblical Psalms known collectively as A Song of Ascent. The usage of the word “ascent” in its Biblical context refers to steps or stations (as on a pilgrimage). But Kirchner’s intent was also to present the sections as a succession of ascending pitches. It should be noted that in his Chichester Psalms, Leonard Bernstein incorporates two of the Psalms, concluding the work with Psalm 133 as a vision of peace and reconciliation.

Perhaps that is why Kirchner’s score (for string orchestra and harp) offers a hint of Bernstein styling in the opening orchestral passage that introduces Psalm 132, “Lord remember David,” the baritone solo role being taken by Rod Gilfry with harpist JoAnn Turovsky (whose playing emerges throughout the piece) symbolically representing the voice of David.

The work evolves in three parts. The first section (Psalms 132, 122, 131, 127, and 128) depicts a type of utopian community (Kirchner was raised a pacifist in the Church of the Brethren, an affiliate of the Quakers). The structural language is richly harmonic and tonal with the soloists and chorale (in unison and sectional divisions) raising their voices in praise of the Lord. The soprano solos were sung with ethereal lightness by Liv Redpath.

The second section (Psalms 124, 120, 129, and 130) represents the chaos that can result when wars are fought over religion when both sides claim God is on their side. The two opposing camps are symbolized by a warrior tenor (Robert Norman) pitted in antiphonal responses against his baritone opponent (Abdiel Gonzalez).

In this section Kirchner expands the orchestral vocabulary to project a heightened level of rhythmic tension and staccato animosity. But he could have pushed further than he does. His unwillingness to introduce even a hint of clashing dissonance feels like a moment of playing safe.

The final movement (Psalms 121, 126, and 134) begins emotionally with the poetry of Psalm 121, “I will lift up mine eyes unto the hills.”  It is a glance toward the heavens that begins the process of reconciliation and unification, symbolized by the two warring male soloists gathering together in a heartfelt embrace.

Grant Gershon is so familiar with Mozart’s Requiem his memory more than served and he conducted without a score. For the performance, the chorale and orchestra were supplemented by the solo voices of Redpath, Gilfry, Norman, and mezzo-soprano J’nai Bridges.

Gershon’s pacing seemed to be conceived for optimum dramatic impact. The opening plea for “eternal rest” combined a sense of hope tinged with deep emotional sadness. Then, plunging almost at a headlong pace, came the Dies irae, a world of fiery judgment. Some sections hurtled along in bright explosive bursts and quickly faded. Others, such as the Lacrimosa (sung beautifully by Redpath) were lingered over for optimal impact.

Hearing the Requiem in the acoustical brilliance of the Walt Disney Concert Hall was particularly exciting, ending in the Lux aeterna with the chorale and the soloists raising their voices on high.

Grant Gershon May Be the Hardest Working Man in Choral Conducting

The L.A. Master Chorale’s music director seems to be involved in every choral concert and opera in town.

Mozart’s Requiem Brings Out the Best in the Masterworks Chorale

If you haven't already (or even if you have) now is the time to check out International Orange Chorale of San Francisco.