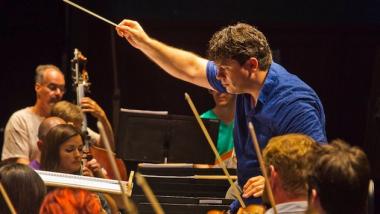 Following Marin Alsop’s departure after 20 seasons as the music director of the Cabrillo Festival of Contemporary Music, all eyes were on incoming conductor and music director Cristian Mačelaru. Would he continue with Alsop’s casual, chatty podium style? Would the programming change in any significant way?

Based on the concert of Saturday, August 5, called “Tributes” and the first of two tribute-oriented programs, it appears that Mačelaru will continue, rather than disrupt, the patterns set by Alsop during her long tenure. He is responsible for the bulk of this year’s programming, which includes music by a wide range of composers who might be described as accessible and largely tonal, plus a sprinkling of works that would be considered more challenging. He spoke directly to the audience before the concert began, and had each of the composers who were in attendance speak briefly about their works, all very typical of the homey atmosphere of the festival, and all very much in Alsop’s style.

Saturday’s program showed both the risks and rewards of a program constructed around homage to others. Gabriela Lena Frank’s Three Latin Dances are an unabashed tribute to the Leonard Bernstein of West Side Story, that most kinetic of Broadway scores. The first, “Jungle Jaunt,” is full of fun, with prominent timpani and percussion and lots of repetition, while the second, “Highland Hawari,” is moodily anxious. The last, “The Mestizo Waltz,” is intended as a “lighthearted tribute to the mestizo, or mixed-race, music of the South American Pacific coast,” according to the composer’s program note, but unfortunately it sounds rather more like stereotypical bullfight music. And overall, the Three Latin Dances came across as wan compared to Bernstein’s model.

James Stephenson’s violin concerto, Tributes, received its West Coast premiere. The concerto is a tribute to everyone who contributed to its creation, which casts a wide net because it includes not only specific individuals but “composers and soloists, past and present, who have written and performed timeless and inspiring violin concertos.” Violinist Jennifer Frautschi, for whom the work was written, gave a strongly phrased and tonally beautiful account of the solo part, but the concerto is oddly proportioned and without much structural focus. The bustling, yet meandering, third movement, which the composer told us had been composed first, is the longest, and while it’s got plenty of ideas, none of them are worked out in a way that builds momentum toward the intended big climax at the end of the piece. The solo cadenza interrupts the momentum, rather than building it, and isn’t nearly enough of a showpiece for the violinist to justify itself. A cadenza might well have worked better in the shorter first movement.

The most attractive and effective of the three movements is the second, the theme of which the composer, facing a composer’s block, took from Louis Armstrong’s improvised scat singing in the song “Hotter Than That,” slowed down considerably, and adapted for his own use. In this movement, the leisurely feel works quite well. Still, the mood of the concerto left me feeling as though I’d spent a half-hour or so in the New York City of 1940s film noir, not a very contemporary feeling at all.

David T. Little introduced The Conjured Life, a Cabrillo Festival commission and world premiere, with a question: “What do we owe to Lou Harrison?” He went on to answer it in some detail even though, to his deep regret, he’d never met the late composer. “Lou is everywhere!” he said. And, indeed, echoes of Harrison are all over The Conjured Life, starting with the invocation of a gamelan, the Indonesian orchestra with which Harrison was so closely associated, at the opening of the first movement, “Invocations.”  Repeated pounding on a bass drum anchors the middle movement, “A Nest of Shadows,” which Little told us outright contained some kind of secret hidden in plain sight. I couldn’t figure out the secret, but the slow, processional progress of the movement had real shape and grandeur. The sweet closing movement, “Aubade (for Lou Harrison),” full of chiming bells and a solo violin, invoked the dawn in Harrison’s memory.

Double Play, by Cindy McTee, consists of two continuous movements, “The Unquestioned Answer” and “Tempus Fugit” (Time Flies). The first uses the main theme of Charles Ives’s The Unanswered Question as its central building block; McTee strews it about the orchestra, turns it backwards, and builds a tense, dark movement out of it. “Tempus Fugit” opens with the unsettling sound of multiple, out-of-synch clocks, conjured up in the percussion section. A series of themes follows; each could be a fugue theme, but somehow none of them get anywhere. Finally, some counterpoint develops, and then, surprisingly, big-band chords in the brass lead right to the climax and close of the piece.

The Cabrillo Festival Orchestra played with its customary flair and brilliance; there can’t be too many orchestras that prepare so much new music so well and in such a short period. In a program of unfamiliar music, it’s hard to draw broad conclusions about Cristian Mačelaru, but on first hearing, it seems that he’ll be a worthy and musical successor to Marin Alsop.

The new director of the Cabrillo Festival of Contemporary Music wants composers to follow their passion and forge a connection with the audience.

A young conductor, just breaking out as a star, claims a post filled 25 years ago by another rising star.