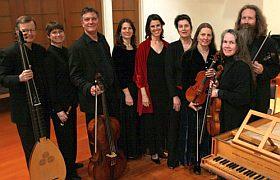 One of the nice things about an ensemble like Warren Stewart’s Magnificat, which I heard Saturday at St. Mark’s Church in Berkeley, is that having a flexible roster of musicians enables it to match itself to the needs of the music at hand. Giacomo Carissimi’s 1650 oratorio, Jephte, which Magnificat performed, has been a particular victim of the tendency to recast early music into the Romantic mode of grand works: adding wholesale orchestrations and lush vibrating string parts to this work for continuo and soloists. Composer Hans Werner Henze once managed to work in parts for tom-tom, boo-bam, banjo, marimba, glockenspiel, trumpets, and four flutes when commissioned to orchestrate it for a London Bach choir.

So it was a relief to hear Magnificat perform the work in a manner the composer may have recognized and, not surprisingly, at the ensemble’s usual high standard. I might fault Magnificat for going too far in the other direction: performing the work’s choruses by soloists. Still, by virtue of attracting the right solo voices, Magnificat achieved a moving choral effect.

The beauty of Jephte’s concluding chorus, one of the great choruses of all time, is the reason the work remains marginally familiar. The biblical Jephta story is essentially the same as the Greek Idomeneo story: The hero makes a vow to God that if he is victorious on his quest he will sacrifice the first person he sees when he returns. In Jephta’s case it’s his daughter, thus providing an opportunity for expressive sad music. The masterwork was clearly known to another great Baroque composer. In addition to writing an excellent Jephtha oratorio 100 years after Carissimi, Handel found it fitting to appropriate Carissimi’s choruses in some of his other oratorios, especially when he needed choruses for Jews in various forms of bondage.

Jephte’s concluding chorus [is] one of the great choruses of all time.

Another highlight is a moving aria sung by the daughter when she finds out about her fate, an aria often excerpted by sopranos. For Magnificat Catherine Webster sang this with her typical admirable beauty, applying the requisite amount of virginal purity to Carissimi’s plaintive melodies. It is generally a good idea in this music for listeners to absorb the beautiful singing while avoiding the translation. For example, Carissimi’s daughter is happy that she will die for God as a “burnt offering” (Greek: holocaust), but bewails that she will die a virgin. Actually, this part of the text came from the book of Judith — another biblical sacrificial virgin. Written for Catholic Rome, this older worldview of blind submissiveness and fatalistic thinking permeated the vocal works on the program.

Other Works of Interest

Also in this fatalistic vein, soprano Jennifer Ellis shone in Carissimi’s virtuosic solo motet, Suonerá l’ultima tromba (The last trumpet shall sound). As was the case for much of the program, the motet sits low in her range, giving her few opportunities to let her voice sail out. She nevertheless coped with the challenge brilliantly, adding a suitable wallop of expressiveness. Bass Peter Becker was appropriately diabolic in the oratorio Historia di Job, showing off a thrilling low D as he tempted countertenor Andrew Rader, whose voice was as solid as his character’s faith. The oratorio Historia dei pelligrini di Emmaus (Story of the Pilgrims of Emmaus) is a silly work that, aside from a fun chaconne chorus, can safely be returned to storage; veteran tenor Paul Elliott’s voice is starting to fade somewhat, so he was cast against type in singing the lines for Jesus.

Katherine Heater, playing harpsichord and organ, and theorbo player John Lenti provided excellent and sensitive support for Magnificat’s singers. In Heater’s place, I would have had a hard time suppressing a chuckle playing Michaelangelo Rossi’s solo Toccata 7, which starts innocently enough but then launches into wild chromatic paces that sound ever more absurd, especially in the archaic tuning system.

In another piece on the program, Lenti relished the harmonies of composer Johann Kapsburger’s Toccata arpeggiata for solo lute, playing them at a slower tempo than I have usually heard it, but one that worked. This masterpiece encapsulates the best of Stairway to Heaven and the “Moonlight” Sonata some 400 years before AC/DC and 200 years before Beethoven, and provided a more spiritual experience than the sacred music in this concert.