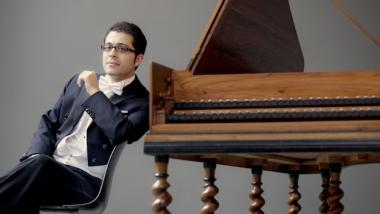 In the two years since signing a recording contract with Deutsche Grammophon to release the esteemed label’s first harpsichord albums in three decades, Mahan Esfahani has been stirring some controversy around the world.

In particular, in the album titled Time Present and Time Past and in recitals around the world of the same title that followed, Esfahani mixes the traditional Renaissance and Baroque period standards with edgy 20th-century repertoire using the latest digital technology. His recital in Cologne earlier this year nearly caused a riot, perhaps not unlike the Paris premiere of the Rite of Spring in 1913, or Ballet Mécanique in 1926 at the Carnegie Hall.

The San Francisco audience at the Strand Theater late Saturday night was certainly more open-minded or forgiving. They sat politely through the minimalist Steve Reich’s Piano Phase (1967) with nary a cough, though it may have felt like an eternity for some. Originally written for two pianos, Esfahani transcribed it for a harpsichord and a harpsichord recording, and he performed one part against the other part he previously recorded. The slow shifting of the phase of the two parts, which repeat the same 12-note sequence but at slightly different tempi, felt as if the room was breathing. There are parts where the recorded part stops playing, leaving Esfahani to continue repeating the sequence, but the recording later joined Esfahani in perfect synchronicity. How this was accomplished, I have no idea.

Reich was not the only work presented that incorporated recorded music. Earlier in the program, Esfahani presented the eerie and visceral Jardin Secret II by Kaija Saariaho, whom Esfahani met at the Aspen Music Festival. This work combines live harpsichord performance that provides textural and rhythmic counterpoint to the recording of electronic noises that filled the hall, including the composer’s erotically nuanced breathing. There were moments that were reminiscent of György Ligeti’s harpsichord work, Continuum, but the contrast between the live performance and the recorded noise created a soundscape with a sharp focus on the instrument on the stage against the backdrop of the enveloping noises. The music was perhaps more about the time and the space in which the sound is present about than the sound itself.

Esfahani interspersed the program with more “traditional” harpsichord repertoire. He opened the program with William Byrd’s The Passing-Measures Pavan and Galliard from the Renaissance period. Here Esfahani showed off his rigorous discipline as a traditional harpsichordist, with clear and deft trills and articulations. The finale in particular was flamboyant and full of spontaneity. Bach’s Toccata in C Major was fluid, with a sense of fresh discovery and exploration.

In a seemingly daring move, Esfahani performed three Scarlatti sonatas followed by six brief sonatas by American composer, Lou Harrison. He performed the total of nine sonatas without a break, asking the audience to hold the applause until the end of the set — with an apology for being presumptuous. Lou Harrison is said to have had a particular affection for the Baroque period, and his works may have been meant to be performed on instruments tuned in just intonation. The beautifully decorated Curtis Berak harpsichord was tuned in equal temperament, and intervals may not have had the purity that just intonation could produce. However, the rich yet austere writing possessed vibrant colors one may not always expect from a harpsichord. Even though Scarlatti and Harrison were separated by 200 years, there was a deep connection that showed the timeless quality of the sound.

Speaking of colors, Toru Takemitsu’s Rain Dreaming possessed an illusion of vibrant colors that should be physically impossible from a harpsichord. Unlike the piano, it is technically impossible to manipulate the harmonics to alter the color and timber of the sound on a harpsichord. Yet, Esfahani created such an illusion from subtle manipulation of timing, bringing out certain voices against others.

Here lies Esfahani’s mastery of the instrument. He seems to possess the uncanny sense of how the audience hears and interprets sound, and how we can be fooled into hearing what may or may not be there. Esfahani presented the audience with a wide range of repertoire that challenges the conventional perception of the instrument being of limited use and otherwise shoved to the dusty corner of the room. Esfahani makes a convincing case for the full range of the instrument, and demonstrated possibilities rarely heard in harpsichord concerts under lesser hands.

With respect to Reich, though, Esfahani left one possibility unexplored. On an instrument with two manuals, it would be physically possible to play both parts on a single instrument. While desynchronizing the two parts may require a corpus callosotomy, it would be a stunt that would actually deserve a riotous response from the audience.

Esfahani concluded with what may be the world premiere of the only harpsichord piece by Benjamin Britten, discovered just days before the performance. With a fugato and variations, it evoked an image of the lost world that is yearning to be rediscovered.