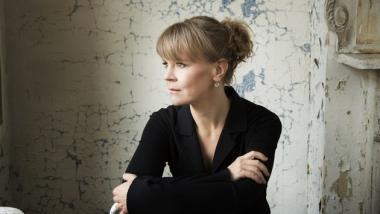 Commissioned by Serge Koussevitsky for the Boston Symphony, the massive 10-movement work premiered in 1949, conducted by a very young Leonard Bernstein who filled in at the last moment for Koussevitsky.

It’s a work that has a distinguished place in the LA Phil’s repertory, with notable past performances conducted by Michael Tilson Thomas, Zubin Mehta, Esa-Pekka Salonen, Gustavo Dudamel, and now Mälkki.

Often performed as an entire program unto itself, Friday’s performance was preceded by the U.S. premiere of Trans for harp and orchestra by Kaija Saariaho with Xavier de Maistre as the featured soloist, a role he has commanded since he performed the 2016 world premiere in Tokyo. The work’s chamber-size orchestration and instrumental coloration, which reflects a strong Messiaen influence, made it ideal to begin the program.

As explained by Saariaho, the title, Trans, refers to “transitions” as in a metamorphosis and “transmitting” the traditional three-movement concerto’s themes that are developed and exchanged between the harp and orchestra. The challenge, the composer explained during a pre-concert conversation, was to create a piece where the fragile tones of the harp could be balanced and not obscured by the full force of the orchestra. As a result, the concerto relies almost entirely on sectional interplay with the harp with particular coloration and contrast provided by glistening effects in the percussion which includes glass chimes, bowed cymbals, small bells and glockenspiel.

The first movement, “Fugitif,” establishes an atmosphere of shadowy washes of color in the orchestration that provides an ideal background for the harp. The second movement, “Vanité,” refers to a particular style of still life painting. Themes appear and reappear as if viewed from different angles and Saariaho employs expanded techniques for the harp, including striking the strings with the flat of the palm and allowing the sound to fade away as an extended diminuendo. Though the final movement, “Messager,” is the most virtuosic, the overall mood of the concerto is one of masterful subtlety.

With its multitude of influences including Indian talas, ancient Mexican architecture, birdsong, Tristan and Isolde, Medieval chant and modality, Greek metric systems, and Catholic mysticism, the Turangalîla-symphonie (despite the passage of more than 70 years) remains a supreme challenge for musicians and audiences alike. Even with study and multiple hearings, the work’s complex compositional mechanisms and philosophical approach to the physical and ethereal nature of love and death defy comprehension. Think of it as the Ulysses of 20th-century modern music.

The title is drawn from a 13th-century compilation of Indian rhythmic systems, combining the Sanskrit word “turanga” (referring to the movement of a horse as a study in time and rhythm) with the word “lila” (to play). But the title is little more than a trailhead that leads to Messiaen’s monumentally scaled succession of tonal and emotional landscapes.

From the first statement of the massive “Statue theme” (inspired by ancient Mayan pyramids) bellowing forth in the trombones to the two “Love Songs” with their lyrical clarinet lines, the perfume-scented garden (with its nocturnal piano birdcalls) “Jardin du sommeil d’amore” (“The Garden of the Sleep of Love”) to the ecstatic exuberance of “Joie du sang des étoiles” (“Joy of the Blood of the Stars”), this was a virtuoso performance that culminated, 75 minutes after it began, with Mälkki directing a crescendo that almost took the roof off Disney Hall.

The piano performance by Thibaudet (the equivalent of about three concertos, most of it played at lightning speed) was remarkable for its stamina and exquisite expressivity, as was the haunting electronic keyboard styling and waving vibratos performed by Millar on the ondes martenot, which now adds a quaintly nostalgic quality to the work.

If there was a defining aspect to Mälkki’s performance, it was her ability to combine an immense sense of orchestral grandeur with perfectly defined metric precision. Massive forte outbursts were atmospherically balanced by instrumental subtlety and coloration.

As stated by the composer, the symphony was conceived to depict “joy that is superhuman, overwhelming, blinding, unlimited.” Friday’s performance did justice to that vision.

Michael Tilson Thomas Clicking on All Cylinders With the LA Phil

His masterful setting of a Carl Sandburg poem highlights the first concert of MTT’s two-week residency in Los Angeles.

150 performers stranded in a becalmed production.