In the quarter century since Maria Schneider released her first album, 1994’s Evanescence, the arranger, composer, and leader of one of jazz’s finest large ensembles has provided an object lesson in how an uncompromising artist can continue to write and record music on her own terms. After three albums for the German label Enja she’s financed and produced her recording projects through the pioneering platform ArtistShare, using a patchwork of grants, commissions, and patron support to create a wondrously idiosyncratic body of work often inspired by her encounters with nature. 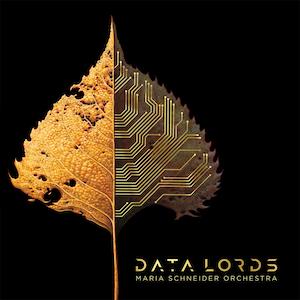 Her love of natural splendor suffuses her ninth release, the two-disc album Data Lords, but this ambitious, bifurcated project takes her 18-piece band into territory where she hasn’t trod before. Half cautionary tale and half rapturous celebration, her message is as blunt and direct as her voicings are shaded and subtle. The first disc, “The Digital World,” explores the damage done by the technological colossi who are shaping the contemporary order (an issue that Schneider has often addressed off the bandstand too, writing essays and articles and testifying before Congress).

Throwing Google’s naïve and presumptuous motto back in the company’s face, her piece Don’t Be Evil swirls with menace as Ben Monder’s snaky guitar and Ryan Keberle’s predatory trombone evoke the addictive lure of the scroll. But Schneider is no Luddite. She seems more in her element celebrating the obsessive commitment and genuine desire for connection of ham radio operators with CQ CQ Is Anybody There? The piece builds from wispy ethereality to Greg Gisbert’s clarion, electronically processed trumpet.

While the first disc is effective, I found the second, “Our Natural World,” more diverse and satisfying, as no one else in jazz builds lapidary passages with Schneider’s patience and attention to detail. The music ranges from the calm, beatific Sanzenin, which features Gary Versace’s accordion tracery, and the playful, darting tribute to potter Jack Troy, Stone Song, a showcase for Steve Wilson’s quicksilver soprano sax. She’s at her most expansive on Bluebird, an 11-minute piece that features Versace’s accordion and Wilson’s alto sax gliding, swooping, and soaring, buffeted by gusts of brass.

The fact that Schneider has been writing for largely the same cast of players, following in the footsteps of Duke Ellington, Thad Jones, and her mentor, Gil Evans, is part of her debt to jazz’s orchestral tradition. One recent addition is drummer Johnathan Blake, whose supple pulse and superb dynamic control demonstrates why he’s such a widely admired (and oft-employed) player. She’s kept busy in the five years since the release of her Grammy Award-winning album The Thompson Fields (including a Grammy-winning collaboration with David Bowie). Timely and trenchant, Data Lords is most moving and memorable when Schneider is inspired by what she loves rather than loathes.

An Electronic Lover in Eden

Bassist/composer Lisa Mezzacappa takes the leap into opera in an original way.

The celebrated Iranian singer and Kronos collaborator crosses new boundaries with a CD of traditional and contemporary Persian poetry recorded with a Norwegian jazz trio.