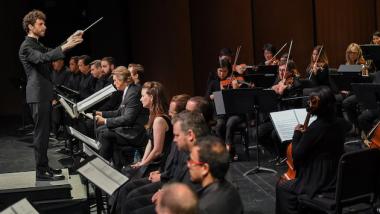 Los Angeles has been getting a good look at the many facets of Matthew Aucoin, the energetic 28-year-old composer-conductor-pianist-librettist-poet-lecturer who is concluding his second year as Los Angeles Opera’s artist-in-residence.

The pendulum has swung both ways for Aucoin as an opera conductor here — a performance of Philip Glass’s Akhnaten in 2016 that had trouble finding its groove and an often-electrifying Rigoletto this month that is still running (through June 3). Halloween 2016 found him underscoring a screening of the silent horror film Nosferatu where he composed pastiches of German music, conducted a 14-piece orchestra, and improvised on the piano. And in the middle of Rigoletto’s run, Aucoin took time out May 25 to conduct the first of two performances of his Walt Whitman opera Crossing — a West Coast premiere — at Beverly Hills’ Wallis Annenberg Center for the Performing Arts.

Are we witnessing the opening chapters of a multipronged career that is threatening to assume Bernstein-like proportions? Or is it too much ambition too soon?

There is certainly plenty of ambition in Crossing, which Aucoin conceived when he was still at Harvard (it received its premiere in Boston in 2015). The opera is set near the end of the Civil War, where after finding his wounded brother and shaken by the sight of other suffering soldiers, Whitman decided to suspend his career as a New York-based writer and work as a volunteer nurse in Washington, D.C. army hospitals. This part of the story is true, and it is also true that he met a young Confederate soldier named John Wormley, whom he refers to fleetingly in his war journal.

From here, Aucoin spins a fantasy of his own, writing the libretto himself with a liberal sprinkling of condensed passages from Whitman poetry. In a preconcert talk, Aucoin said that his original model was Janáček’s searing From The House of the Dead, with grim testimonials from a cast of wounded soldiers. But he ended up ditching that idea by zeroing in on an imagined relationship between Whitman and Wormley.

At first, Wormley says he is from Boston — and for about three-quarters of the opera, we wonder why this “Bostonian” clearly has a Southern accent — but he doesn’t reveal his true identity until after a messenger announces the end of the Civil War. Seizing upon disputed evidence that Whitman was gay, or at least bisexual, the 103-minute opera eventually becomes a love story, posing Wormley as a challenge to force the middle-aged Whitman to look at himself in the mirror.

Judging from descriptions of the Boston and Brooklyn Academy of Music productions, I imagine that this premise would have been more riveting had the opera been fully-staged. But this was a concert performance — a coproduction with the Wallis by L.A. Opera’s Off Grand offshoot — with no props, with members of the L.A. Opera Orchestra onstage and the 12-member male chorus lined up front on either side of the vocal soloists and conductor. The music was left to its own devices, and it just didn’t hold up.

Aucoin’s score trudged onward, busily overdecorating everything in a mostly anguished, amorphous tonal idiom, often blanketing even the formidable resources of the vocal soloists. The vocal lines were operatically sustained, but there was too much going on — almost none of it particularly memorable — within the orchestra underneath them. Nothing really powerful came through until Whitman’s aria “Flood-tide below me” (from the poem “Crossing Brooklyn Ferry”), cannily placed just before the intermission break a long hour after Act I began. The less-discursive Act II came off better as the dramatic arc of the piece became clearer.

Fortunately, this performance had the presence of the creator of the Whitman role, baritone Rod Gilfry, who, without costuming and makeup (one reviewer of the BAM production thought that he even bore a resemblance to photographs of Whitman) still conveyed the granitic authority of the middle-aged poet. Tenor Brenton Ryan as John Wormley could credibly go one-on-one with the formidable Gilfry, though at times both were rendered almost unintelligible by the onstage orchestra. Thank goodness for the supertitles.

The ever-rising bass-baritone Davóne Tines conveyed his own brand of authority and anguish as the runaway slave-turned-Union-soldier Freddie Stowers, and soprano Liv Redpath made a brief songbird-like appearance as the messenger. The left-handed Aucoin led the orchestra in his by-now-familiar animated manner, and the chorus of wounded, disillusioned soldiers made its biggest impact with the ever-relevant line, “We are the money spent to win this war.” There is some power and contemporary resonance in this Civil War opera — and some in the Wallis audience were visibly moved — but you have to wade through thickets of portentous note-spinning to find it.