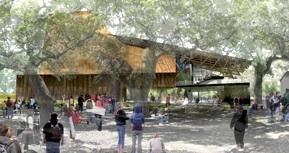 Dan Leeson on October 12, 2009
Sunday afternoon’s inaugural performance at the sumptuous new Center for the Performing Arts at Menlo-Atherton opened both eyes and ears. The performers were pianist Wu Han and cellist David Finckel, the artistic directors of [email protected], along with a colleague, the clarinetist Anthony McGill of the Metropolitan Opera Orchestra; the composers were Beethoven and Brahms.

The facility, built on the campus of the Menlo-Atherton High School, is a $32 million investment financed by a bond issue. It seats 500 and can be used by a wide variety of performing organizations, though, if the opening concert is any harbinger, chamber music will be the facility’s specialty.

CPA’s cantilevered roof and glass front face an irreplaceable group of oak trees that were seedlings before the American Revolution. The images of the trees, deliberately reflected in the glass front, also influence the hall’s interior where a leaf motif is woven into the carpeting. On the sidewalls of the concert hall, luminous acoustical panels (also bearing a leaf design) can change color to help establish and maintain the music’s mood. The facility also contains space for the sprawling Menlo-Atherton High School’s instrumental program, as well as a cafeteria.

The most compelling characteristic of the Menlo-Atherton CPA is the hall’s acoustic personality, designed and supervised by Paul Scarborough of Akustiks of New Haven. No matter how qualified the acoustician is, though, when concert halls are designed the acoustics often seem to be a throw of the dice. Happily, this one is almost perfect, whether by design, good luck, or Kentucky windage.

The result is a physically beautiful and acoustically splendid concert hall that’s flexible for all kinds of groups, from solo recitals to opera. It’s probable that — like De Anza College’s Flint Center, where the San Francisco Symphony often plays and even records — the CPA will become a popular professional recording venue. [email protected] is going to use it for their festival programs. Though designed for chamber music, once the acoustical reputation of the hall is known, the CPA will undoubtedly become a desired performing venue for almost any group.

Three by Three for Three

The music chosen for the initiation of the center were two trios for clarinet, cello, and piano, plus a piano concerto cleverly disguised as a cello sonata.

Like Mozart before him and Brahms after him, Beethoven also was associated with a virtuoso clarinetist, the Viennese Franz Joseph Bähr, for whom the trio in B-flat, Op. 11, the first work on the program, was written. While the clarinet and cello have delightful lines, this really a pianist’s piece. Although Wu Han played her part brilliantly, I felt that some first-movement tempos lay on the knife edge of being too fast for adequate execution.

The second work, the Beethoven Sonata for Cello and Piano in G Minor, Op. 5, No. 2, is even more of a piano composition than the Op. 11 work. The putative cello voice is certainly not trivial, but, considering the exceptional technical requirements of the piano line, it’s of secondary importance in terms of what it brings to the total performance.

Following intermission, the audience was dazzled by a brilliant execution of the Brahms Trio, Op. 114, one of the finest pieces of Romantic chamber music in the repertoire. Here, the leading voice is the cello, executed by Finckel with total authority. In each of the four movements, he took charge and effectively supervised the progress. McGill is no shrinking violet as a clarinetist, yet in this performance Finckel was the boss.

For an encore, the group played the seventh of eight short works by Max Bruch. It’s a charming piece, though not in the same class as any of the other works on the program. As an encore, however, it does the trick.

Taking It All In

The three star performers made a fine trio, partly due to the efforts of Wu Han (see an SFCV profile). While the other players generally focused on their performance parts, glancing at each other only when circumstances permit, she was always in motion, turning her gaze away from her printed score to look at the other players for extended periods, often as long as several seconds — a feat requiring a fantastic memory and a thorough grasp of the music.

By its nature, chamber music requires considerable attention to what your partners are doing. Wu Han created a helpful and important intimacy and strengthened the cohesiveness of the performances. Such attention to the details of the other players’ efforts is an important quality that makes her such a superb chamber musician.