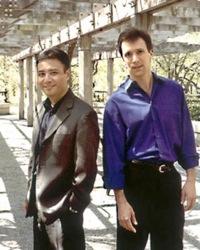 On Friday, the remarkable duo of clarinetist Jon Manasse and pianist Jon Nakamatsu gave a sensational recital of works that covered the period from the first half of the 19th century to a celebratory composition written for the centennial of Benny Goodman’s birth, which occurs this year.

Presented at the Sacred Heart Catholic Church in Saratoga, the concert program included a first-half Duo by the early 19th-century composer Norbert Burgmüller, who drowned while suffering an epileptic seizure in 1836, at the age of 26. Robert Schumann’s memorial notice stated that, since Franz Schubert’s early passing eight years earlier, no death was more deplorable than that of Burgmüller. The work is a charming, highly original, and sweetly melodic composition from someone lost too early.

The Brahms Sonata in E-flat, Op. 120, No. 2 followed Burgmüller’s work. From Manasse’s first entrance, I knew we were in for a special evening. His playing is so luminous, his performance of the work so well-structured and intelligent, that it brought the sonata to life for me. It is a composition I know well, and to be frank, I had never succeeded in unlocking its secrets. But in Manasse’s hands it opened like a flower and made perfect sense.

And in his entirely equal contribution to the performance, Nakamatsu was part and parcel of the brilliant interpretation. I had never before heard him in any role other than as a soloist, but Friday he was significantly more than merely an accompanist to someone else’s glory. He was a participant of equal value, without whom the Brahms sonata would not have achieved its extraordinary performance.

Following the intermission, the program took on the kind of excitement that music lovers get to enjoy in exceptional circumstances. After a performance of the Leonard Bernstein sonata — his first published composition, written while a student at Curtis Institute — the audience heard two phenomenal works that brought it to its feet.

Memories of the Great Licorice-Stick Man

The first was Paquito D’Rivera’s composition The Cape Cod Files, commissioned this year for the “Jon/Jon duo” by the Cape Cod Chamber Music Festival. Opening with a movement titled “Benny,” in commemoration of the 100th anniversary of the birth of Goodman, the great American jazz and classical clarinetist, it was based on one of his own best-known tunes, Memories of You. Effectively a set of variations on the tune, the panoply ran from slow blues to boogie-woogie. It was followed by a movement called “Bandoneon,” named after the South American accordion that uses buttons instead of keys and is capable of great expressiveness.

So controlled were the players that they played right through an electrical malfunction that caused a giant bang, without seeming to notice.

A third movement, “Lecuonerias,” honored the Cuban composer Ernesto Lecuona (1895-1963), a pianist and author of the well-known Malagueña, a popular jazz, marching band, and drum-corps standard that is still in favor.

The work’s final movement, “Chiquita Blues,” was a real handful of notes, expertly executed by the player pair, containing a clarinet glissando and a “smear” that rivaled the famous beginning of George Gershwin’s Rhapsody in Blue.

Yet it was the concert’s final work that resulted in the most explosive audience reaction. Titled Four Rags for Two Jons, by John Novacek, it was a kaleidoscope of styles that required blazing techniques from both performers. The very brilliance of the composition will likely hurt its performance possibilities, because few players will be able to execute the work with the panache displayed by the Jon/Jon duo. The technique displayed by both men was like a fireworks display.

For an encore — the players might have been mobbed, had they not had one ready to go — the pair played a wild and brilliant fantasy on Gershwin’s 1930’s tune I Got Rhythm.

Among the nonmusical things the players brought to the stage was a sort of Penn and Teller routine in which one person does all the talking while the other remains mute. Manasse was the talker and, while most of his commentary was charming, he needs to develop a better, more fluid speech style. Almost every time he paused in his otherwise pleasant talk, he came out with the speaker’s nightmare, an “uuhhh.” After a while I could focus on little else, and even started to count them.

One of the jokes Manasse told was amusing. In his comments on the bandoneon, he recounted the brief story of a man who left his accordion locked up but visible in the back seat of his car. When he returned, he found a window smashed in, and a second squeezebox thrust in next to the first. Readers may remember the bumper sticker that says: “Play an accordion, go to jail. It’s the law!”