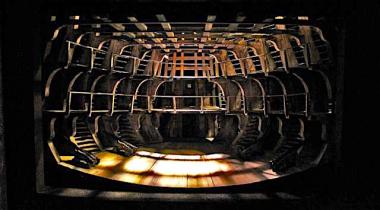 Power. In opera, it means so much more than big or loud, the shaking of rafters. The power of opera to seize and hold attention and emotions was appealingly demonstrated Saturday night for an audience of some 2,000 in the War Memorial Opera House.

Portraying, respectively, Madame Lidoine and Mère Marie de l’Incarnation, the doomed nuns of Francis Poulenc’s Dialogues of the Carmelites, the two young artists engaged hearts and minds in the uniquely affecting way music must provide to realize the art’s potential.

The “Mes chères filles” (My dear daughters) aria and duet was one of the high points of the Grand Finale, the culmination of the San Francisco Merola Opera Program‘s 12-week training course of 24 young singers, four apprentice coaches, and Australian apprentice stage director Greg Eldridge, who was also responsible for staging the event.

Participants were selected at auditions far and wide, bringing the artists to San Francisco from Canada, South Korea, New Zealand, Colombia, Brazil, Australia, and 12 states. They have been coached, trained in operatic repertory, foreign languages, diction, acting, and stage movement; they rehearsed and participated in master classes, and received important private coaching.

On Christopher Oram’s striking set — both enormous and confining — for Britten’s Billy Budd (featured next month on the San Francisco Opera fall season), the three-hour “graduation exercise” unfolded well, but only after a somewhat rocky start. Under the direction of George Manahan, the orchestra at first sounded tentative and not quite in sync, but soon hit its stride.

By the third excerpt, orchestra and singers came together, and mezzo Brennan Blankenship, in an aria from CharlesGounod’s Romeo and Juliet, and then soprano Anne-Marie MacIntosh in an excerpt from a kindred opera, Vincenzo Bellini’s The Capulets and the Montagues reminded the audience what these season-closing events are about.

Lyric beauty of voice combined with outstanding diction characterized tenor Brandon Scott Russell’s performance of an aria from Dvořák’s Rusalka, the hit of the SFO summer season just a few weeks ago.

Among the occasionally over-busy stage directions from Eldridge, one of the more successful (if still unreasoned) shticks was the appearance of baritone Edward Laurenson as Don Alfonso in drag to fume about women who cannot be trusted, in Mozart’s Cosi fan tutte (So do they all). Musically, the selection was eminently straightforward, with Esther Tonea’s bright Fiordiligi, and tenor Michael Day’s passionate Ferrando; apprentice coach Andrew King accompanied them on harpsichord.

Next, soprano Chelsea Lehnea, tenor Salvatore Atti, and baritone Rafael Porto realized intense musical drama in Gaetano Donizetti’s Maria Stuarda as, respectively, Elisabetta — the queen about to sentence Mary, Queen of Scots, to death — Leicester, Mary’s champion, and Lord Cecil, urging Elizabeth I to get rid of her rival.

Lighter, agile, beautiful voices came from soprano Elisa Sunshine as Marie in Donizetti’s Daughter of the Regiment and soprano Patricia Westley as Nannetta in a magical scene from Verdi’s Falstaff.

As it has become a questionable standard at these concerts, one closing scene is never enough, so the perfectly finale-appropriate Falstaff scene of “Ninfe! Elfi! Doridi!” was followed by an Offenbach excerpt, a recitation from Shakespeare, and then the real Falstaff closer of “Tutto nel mondo e burla”... a half-hour after the promised finale to the Finale.

The new Merolini alumni are now heading home, but a few fortunate ones will return as Adler Fellows once the selections are announced in the near future. As to the current Adlers, they will have their own Grand Finale in an annual event called “The Future Is Now,” to be held on Dec. 6 in Herbst Theater.

Brilliant Merolini were more than up to the rich challenges offered in the commissioned If I Were You.

It was a group effort that brought home Mozart’s final Italian comedy at Merola, all the way down to the apprentice coaches.