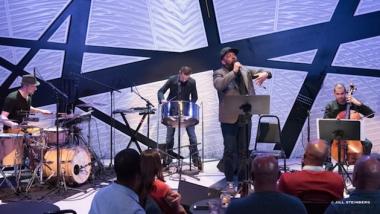 At the first break for applause after a face-melting drum solo, poet and spoken-word artist Roger Bonair-Agard commanded, “This ain’t golf, make some noise for Sean Dixon, the filthiest drummer in Los Angeles.” We, the generous handful in the black-box theater at The Wallis, tried our best to comply — the applause never felt like enough for the wealth the band was giving.

The show is a set of 10 pieces, all sizzling with the tightness of Dixon’s drums and the push and pull of Bonair-Agard’s poetry, all underpinned by Andy Akiho’s rhythmic and melodic signature, rooted in the sounds of his steelpan. Aside from the first song of the set, all the pieces are a combination of Akiho’s solo steelpan works and poems by Bonair-Agard — either arranged for all four performers, or, like that drum solo and a later solo by cellist Jeffery Zeigler, are further improvisations on the music and the poetry. The grooves are irresistible, and the poetry, integral to the groove itself, had my mind racing, and tears welling.

The name comes from the story of Japan’s Ariana Miyamoto, the half-Japanese half-African American Miss Universe winner of 2015, who was rejected by the Japanese public as not being “pure” enough to represent Japan. The band, newly formed in 2015, read about Miyamoto and thought this name suited their own mission well, because of their own half-Japanese members and their ideology of accepting and acknowledging mixed cultures, in music, language, and people.

I loved the piece about the birth of Bonair-Agard’s daughter, and the 15 hours he drove to be there. The sunniness of the steelpan lifted up the breezy passages of the poem about standing on a roof top. The groove was calm, shining through the gravity of a birth and all the life the father went through to get there. Zeigler held down the bass here and in many of the other pieces, though his role expanded in others, as it did in the piece that was maybe the height of the evening. It was an epic piece encompassing the poet’s history with steelpan, his fading memory and distance from his first home, and the brilliance of the “greatest pan arranger,” the Trinidadian Jit Samaroo, a son of Indian immigrants. As the complexity of the poem mounted, the music ramped up in tandem; at one point a roof seemed to shatter as Akiho put down two of his four sticks and what sounded like a hail storm issued from his instrument.

Aside from the electric cello, the presiding connection between these artists is that crucial elements of their art forms have origins in black cultures. Dixon is a white drummer whose style stems from jazz and hip-hop, Akiho’s primary instrument is from Trinidad, Bonair-Agard is a black spoken-word poet from Trinidad. In a poem that he described as a list of pointers for people to not be “asshole gentrifiers,” Bonair-Agard asks for white people to “one time make yourself not the center.”

This band’s project seems important right now because even as they work within the contemporary classical music sphere, they allow the black aspects of their art to be front and center here. They are a racially mixed group, and through this music they are giving space to the important cultures that inspire their work, and voice to the people who live in them.