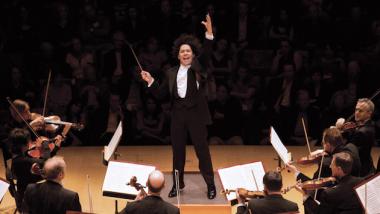 The featured performance of the Los Angeles Philharmonic’s Green Umbrella concert on Tuesday was to have been the world premiere of Ted Hearne’s opera, Place, for six voices and 18 musicians conducted by Gustavo Dudamel.

A co-commission with Beth Morrison Projects and the Barbican Center, the work was then to have had its London premiere on May 3 as part of the orchestra’s upcoming East Coast and European tour. A little over two weeks ago, however, the Philharmonic announced that the piece would not be ready in time for its local or European debut.

The result was a quickly assembled Green Umbrella concert that substituted Hearne’s 2012 composition for strings, Law of Mosaics preceded by Pauchi Sasaki’s high-tech, high-fashion composition Gama XV: Piece for Two Speaker Dresses; and two pieces by Frederic Rzewski: Coming Together and Attica. This is the program that Dudamel will conduct in London with Julius Eastman’s Crazy Nigger in place of Sasaki’s creation and Rzewski’s Coming Together.

It may not have been the Green Umbrella program the Philharmonic intended, but it was an interesting concert that ranged from the conceptual visualization and soundscape of Gama XV: Piece for Two Speaker Dresses to the defiant protest anger of Rzewski’s Coming Together to the deconstructivist “needle-drop” mix-and-match layer cake of Hearne’s Law of Mosaics.

Place would have showcased Hearne at his current compositional strength, whereas Law of Mosaics represents a more formative piece when the composer was developing a willingness to steal freely from everybody and turn the music of the past and present into a free-flowing sonic collision collage.

Conducted by Dudamel, the work is composed in five (distinctively titled) movements: “Excerpts from the middle of something,” “Palindrome for Andrew Norman” (who was in the audience), “Climactic moments from Adagio for Strings and The Four Seasons, slowed down and layered on top of one another,” “Beats,” and “Climactic moments from Movement III, three times as slow as before.”

In each movement, Hearne establishes musical structures that seem to define a specific direction then stop (as in the first movement), change direction on a dime, or become an oddly reflecting mirror (movement 2), interweave quotations from Barber, Mahler, Bach, and Vivaldi in odd juxtapositions (movement 3), pulsate like a swarm of bees (movement 4), or turn to molasses (in movement 5). Sometimes the mood is playful and at other times chaotic, sometimes like random channel surfing.

Dudamel and players, knowing this was a piece they would soon be performing on tour gave the performance a hard-driving, sharply defined quality that emphasized Hearne’s dynamics and contrasts but without any sense of playful mayhem.

For the performance of Gama XV: Piece for Two Speaker Dresses the lights dimmed and the sonic rumbles of the score filled the hall before the two fashionista-soloists (Sasaki and Claire Chase) made their entrance down the sides of the orchestra section, like a pair of space aliens who’d beamed into the hall with their dresses literally wired for sound.

As an evolving series of abstract computer-generated projections illuminated the hall, the two performers, step-by-step, made their way to the stage where their solo instruments (Sasaki’s violin and Chase’s alto flute) were waiting. The visual scheme was mesmerizing, more so than the music, which combined electronics from the two dresses and auditorium speakers with abstract melodic lines for the flute and violin.

In comparison, the two Rzewski compositions, also conducted by Dudamel, felt like music from a bygone era. Coming Together combined minimalist styling and political intensity as narrator Davóne Tines recited repeated phrases from a 1971 letter by Samuel Melville, who was one of the key figures in the Attica Prison riot. In total contrast, Rzewski’s shorter work, titled Attica, is idyllic and lyrical, as if magically the sky had opened and offered an ultimate release.